There is a Malay proverb: “sedangkan lidah lagi tergigit”, that roughly translates as “even the tongue can get bitten”. It applies to groups of people, such as a husband and wife, or siblings, who, despite their close relationship, can fight or have a misunderstanding. Perhaps that is the point. That the ones who are closest to you can hurt you the most. And families can come with expectation, disappointment and obligation even as one longs for acceptance, understanding and belonging from the very same people. And what happens if everyone is hurting, everywhere and all at once? As in Eat Duck, where a family is forced to confront its demons and fears when its matriarch dies, and contend with an uncertain future marked by a recent reminder of its own mortality.

The events of the play cover a period of one week – the seven days of Ah Ma’s wake – where the family, including other halves and offspring, come together to cry, pray, talk, laugh and argue, as they partake in the requisite Taoist funeral traditions. This portrait of a family in grief comes with a cast of painfully real characters – from black sheep Eran (Hang Qian Chou), to outsider in-law Daniel (Pavan J. Singh), always angery uncle Jerry (Hang in a double role), and rule-breaker Eric (Chaney Chia). Young playwright Zenda Tan was inspired to write Eat Duck after attending a similar funeral, and in doing so, has pulled off one of the most promising debuts in professional Singapore theatre in recent years. 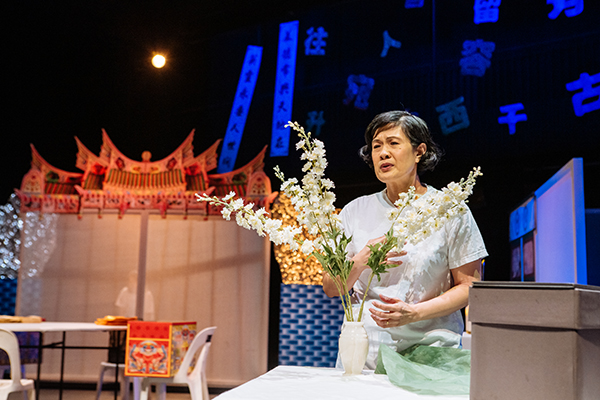 In the course of the taut 100-minute play, no one mourns in the same way. Karen Tan, as the eldest sibling also named Karen, can’t quite look into her mother’s casket despite sitting by it for hours. Myle Yan Tay’s Lucas is racked with guilt for not visiting his grandmother more, even as he helps his girlfriend Elisha (Victoria Chen) navigate through the optics of this exercise of familial obligation. And in the midst of this busyness of joss stick burning and paper offering folding, is the fact that part of the family have found Christ, whether through marriage or otherwise. The baby of the family, Rene (a very convincing Shann Sim), sings Jesus Loves Me, as she brandishes a Barbie in front of Ah Ma’s casket.

Despite this, and the generational divide within the family, most of them demonstrate a curious sense of superstition, heightened by the funereal setting. Hui Min (Wiggie) tries not to cry in front of the casket because it would be bad luck; Rene’s favourite word seems to be “choy!”; Lucas quickly touches a wooden table when he talks about his father dying. These clever touches by Tan are effective in highlighting the idiosyncrasies behind growing up in the Venn diagram of a blended yet Chinese, Christian yet Taoist and modern yet Singaporean family, where these seemingly contradictory positions are simply a way of life. Superstitions flow from culture, and often are a signal of the shared language a family speaks, verbal or otherwise.

Whether due to notions of filial piety, or a belief in the afterlife, the different members of the family do their best to give Ah Ma a fitting send-off. To this end, director Claire Wong has all the actors (save Hang) fold a never-ending stack of paper offerings on the sides of the stage throughout the play. This communal act underscores the sense that, united or not, there is no doubt that this is family. 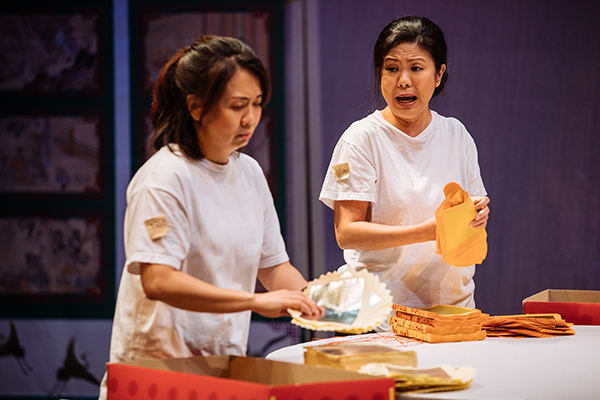 The illustrious Hang Qian Chou plays two characters in Eat Duck, but it is his turn as Jerry that is particularly inspired. For most of the play, he guilt trips the others for not mourning their mother properly, in a “not say I want to say” kind of way, but in the final send-off for Ah Ma, he reveals the pained truth of his brusque manners. Hang’s portrayal is restrained yet powerful, showing us the cracks in this man who does not speak as well as his siblings, who lives apart from everyone, and whose wife and kids are never seen. Also notable is Jean Ng as the quippy single mother Lucy, who we learn has built up this cool exterior partially to forget the heartbreak of her estrangement from her eldest son.

The entire ensemble is strong, with the adult cast really sinking their teeth into their characters, but the younger actors deserve a mention too. I enjoyed the close yet prickly relationship between brothers Eric and Elijah (Adam Michael Scott Wee An), and appreciated their constant recalibration when faced with different members of their family – this closing and opening of ranks that is common amongst children of broken families. I applaud Checkpoint Theatre for its continued support of young actors, and this play is perfect for showing off their growing talent.

In Tan, we also have a playwright who writes Singaporean dialogue beautifully, and is unapologetic about not offering translations for lines that are in Mandarin and Hokkien. While there were a number of clunkier lines such as “you pay in grief for loving someone when they were alive”, the dialogue really shone in the parts that showcased the beauty of Singlish brevity:

Standing in sharp contrast to the play’s talky scenes is the final denouement, where the family perform their final prayers for Ah Ma in an extended physical sequence that has become an enjoyable signature of Checkpoint. The combination of devotional music (by Shah Tahir), the haunting blue light outlining the casket (by Liu Yong Huay), the choreography of the procession, and the actors’ respective reactions create a punchy emotional climax that had hitherto been only lingering in the air. In a way, it felt like we were joined by Ah Ma herself, a stark reminder of the life she had lived embodied in the presence of the ones that survive her.

In busy Singapore, funerals often stand in for family reunions, and Eat Duck was a family affair in more than one regard. As I walked into the theatre, Checkpoint’s co-founder Huzir Sulaiman noted that Tan is a former student of his former student, the playwright Faith Ng. In that moment, I became aware of the passing down of batons that need not happen with fanfare. Families transmit knowledge, skills and cultural memories in the quiet of the everyday. In bringing Eat Duck to the stage, Checkpoint Theatre is demonstrating care and love for someone it truly believes in. The way someone in your family might, after a time of not seeing you, ask: have you eaten?

Eat Duck was presented by Checkpoint Theatre. It ran from 29 August to 8 September 2019 at the SOTA Studio Theatre, Singapore.