We move through the Kampong Bugis landscape throughout the performance, along patches of grass, the river, and brick-tiled pavements. A residue of dirt, sand, and mud clings to our soles, and the afternoon is afflicted with bouts of rain. The atmosphere invokes a stifling sensation brought upon by the weightiness of humidity, which bears down on us as evening approaches and we lose the last few rays of sunshine.

BITTEN: return to our roots by Thong Pei Qin & Dr. Nidya Shanthini Manokara, ran on 24 and 25 November, and 1 and 2 December. The performance brings one on a walking tour of the Former Kallang Gasworks and its surrounding areas, beginning at hip barbecue spot Camp Kilo Charcoal Club and ending at the Sri Manmatha Karuneshvarar Temple, a five-minute walk away.

The sensorial shape of the narrative is presented to us by performers Masturah Oli and Seong Hui Xuan, whose characters – Yamuna Devi Chathrapathi and Dong Xi Yan – are united by a mutual bout of dengue fever. This sets the scene for a collaborative exploration of their history due to their similarities, and begins the interrogation of their respective pasts and how that has influenced their present. Intertwined with their interrogation is the notion that spaces occupy multiple identities, for both characters, and for the audience members, who are encouraged to map upon its history with their own experiences. Together, they imply that it is within those experiences, carried from the past, that we are able to discover who we are.

As we sit down inside the temple, we are given folded paper boats, the same ones that litter the spaces we have visited. The small boat I held in my hands seemed to prompt me to think about the narratives I carry within myself. How were they similar or different from those of Xi Yan or Yamuna? How strong are the ties I have to my own history? I had no answers, but I appreciated the questions. I found myself agreeing more and more with Seong’s implication that we are all “rojak”. We are all complex beings, with our own histories, our own perspectives, and our own disparate experiences that constitute our personalities. What the performance iterates is that the greatest act of reconciliation, the most effective remedy to alienation, is a collective participation in each others’ experiences, so as to share the burden of our varied pasts.

BITTEN: return to our roots by Dr Nidya Shanthini Manokara and Thong Pei Qin was staged at Camp Kilo Charcoal Lounge on 24-25 November and 1-2 December. This response is based on the performance on 1 December 2018, 6pm. 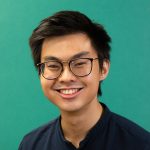