My friends that have visited Singapore in recent times have been given the following non-food recommendations by me: I point them to Haw Par Villa for its wonderfully macabre dreamscapes of punitive Asian values, and then suggest they drop by National Gallery Singapore for the art contained within a pair of disemboweled historical buildings, that can be seen as representing a soul-searching Singapore attempting to extricate itself from its colonial past. The Gallery is currently showing an exhibition titled Awakenings: Art in Society in Asia 1960s–1990s, a meaty show with which to learn about socio-political art and radical art movements in the region during a time of great political, economic and social upheaval in Asia.

The ambitious show gives visitors access to 142 artworks by 100 artists from 12 countries. And the sheer size of Awakenings makes it worth visiting, as much as the curatorial intent does. One of the exhibition’s curators, Adele Tan, tells the media that the exhibition – a joint effort by the Gallery together with the Museum of Modern Art Tokyo, Museum of Modern and Contemporary Art Korea and the Japan Foundation Asia Center – is “an act by an institution against forgetting”.

I do appreciate this sentiment, especially with works like Siti Adiyati’s Eceng Gondok Berbunga Emas (Water Hyacinth with Golden Roses), a square pool of real water hyacinths interspersed with gold plastic flowers, a critique of consumerism during the Suharto era and a recognition of the contributions of the everyday Indonesians. The organic forms of the water hyacinths stand in sharp contrast to the museum’s slick interiors, like it did when it was first shown in the 1979 Gerakan Seni Rupa Baru exhibition, as part of a new movement of young artists fighting against the aesthetic conventions of Indonesian fine art. Placed in such a cavernous venue as the Gallery, it is slightly defanged, but it is no wonder that this beautiful work is displayed in the public first floor area of the museum.

With a survey format like this, Awakenings can easily become unwieldy, and the curators do an admirable job of segmenting it into three themes – Questioning Structures, Artists and the City, and New Solidarities. But as I made my way through the exhibition, I found these themes becoming less and less important, and focused instead on the individual artworks and their specific raisons d’être. A smallish “feminist” section in the exhibition, for example, instead of being galvanising, makes the works seem disparate and oddly flattened.

Assuming ceteris paribus – seeing the exhibition as an intellectual exercise, as an attempt to categorise what has not been categorised, as something to be studied – Awakenings is a good show. It is worth spending a couple of hours on, trying to understand the issues arresting the imaginations of artists in the region during this particular period. But I was left wondering about the relevance of showing the exhibition in Singapore, where artists who do make socio-political art have been made out to be troublemakers with some nefarious agenda, as well as dangerous dissidents subject to legal clamp down. During a Q&A session at the tail end of the show’s media conference, Singapore artist Amanda Heng noted that despite living in what seems to be an age of peace, artists today have much more to reflect and comment on. Staying awake, or “woke” as per the slang of the times, is a continuous process. Awakenings might focus only on the 1960s–1990s, but that time period is not quite a closed bracket, and continues to extend towards our present. Artists, activists and members of civil society are still today working hard, refusing to stand idly by in response to policies, behaviours, and responses that they deem inadequate, irresponsible or outdated.

In putting up a show like Awakenings, an institution can inadvertently sanitise and historicise as much as it means to document and highlight. Metres away from the carefully curated artworks, the facade of the Gallery is currently emblazoned with the words “Majulah Singapura” in bold red capital letters. Barricades are up all around the Padang opposite the Gallery, in preparation for Singapore’s 54th National Day. 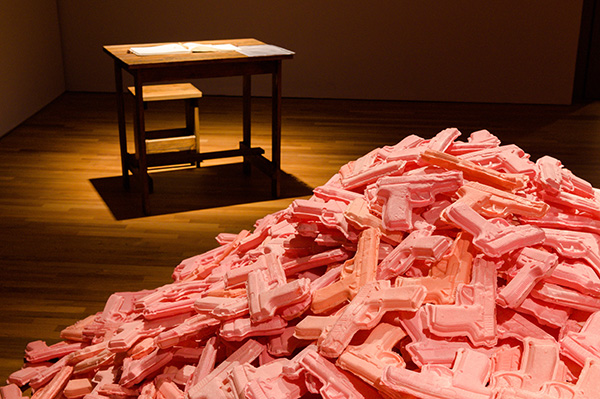 Coincidentally, there are a number of works in the Gallery that echo the activities being done outside. Not unlike the current roadblocks happening around the Padang, Lin Yilin’s Safely Manoeuvring Across Linhe Road has the Chinese artist interrupting traffic for 90 minutes, as he painstakingly moves a wall of concrete, block by block, in the middle of a busy road in Guangzhou. The 1995 site-specific performance highlighted the rampant urbanisation efforts changing the face of China at the time. Seeing FX Harsono’s pile of pink guns, What Would You Do If These Crackers Were Real Pistols? made me think of what military might signifies for Singapore, and the significance of the 21-gun salute for our President at each year’s parade. These may seem like facile comparisons, but perhaps not – in an accompanying ledger where visitors can write down what they would do with the pistols, amidst suggestions such as “report to the government” and “kill your thesis supervisor”, someone had scrawled “become a soldier”.

“Majulah” is often translated as “onward”, moving ahead, moving past – a trajectory that is especially relevant when considering the postcolonial backdrop against which it was composed by the late Zubir Said in 1958, and subsequently adopted as our national anthem in 1965. But “majulah” can also mean “forward”, meaning progressive, meaning envisioning a Singapore of our future imaginings. Meaning: let’s consider the possibilities of our shared future, one in which those that disrupt and question are no longer seen as troublemakers or criminals, but as representations of an embodied courage. The ones with the courage to ask, how can we, as a society, as a people, be better and do better?

As Singapore gears up to celebrate its achievements within such a historic venue, let us also think about how we can start to make space for artistic and constructive dissent and disruptions of today, instead of relegating them to museums of the future.

Awakenings: Art in Society in Asia 1960s–1990s is currently on at National Gallery Singapore till 15 Sept 2019. The Gallery is currently offering free and discounted admission to its exhibitions from now till 31 Aug 2019.