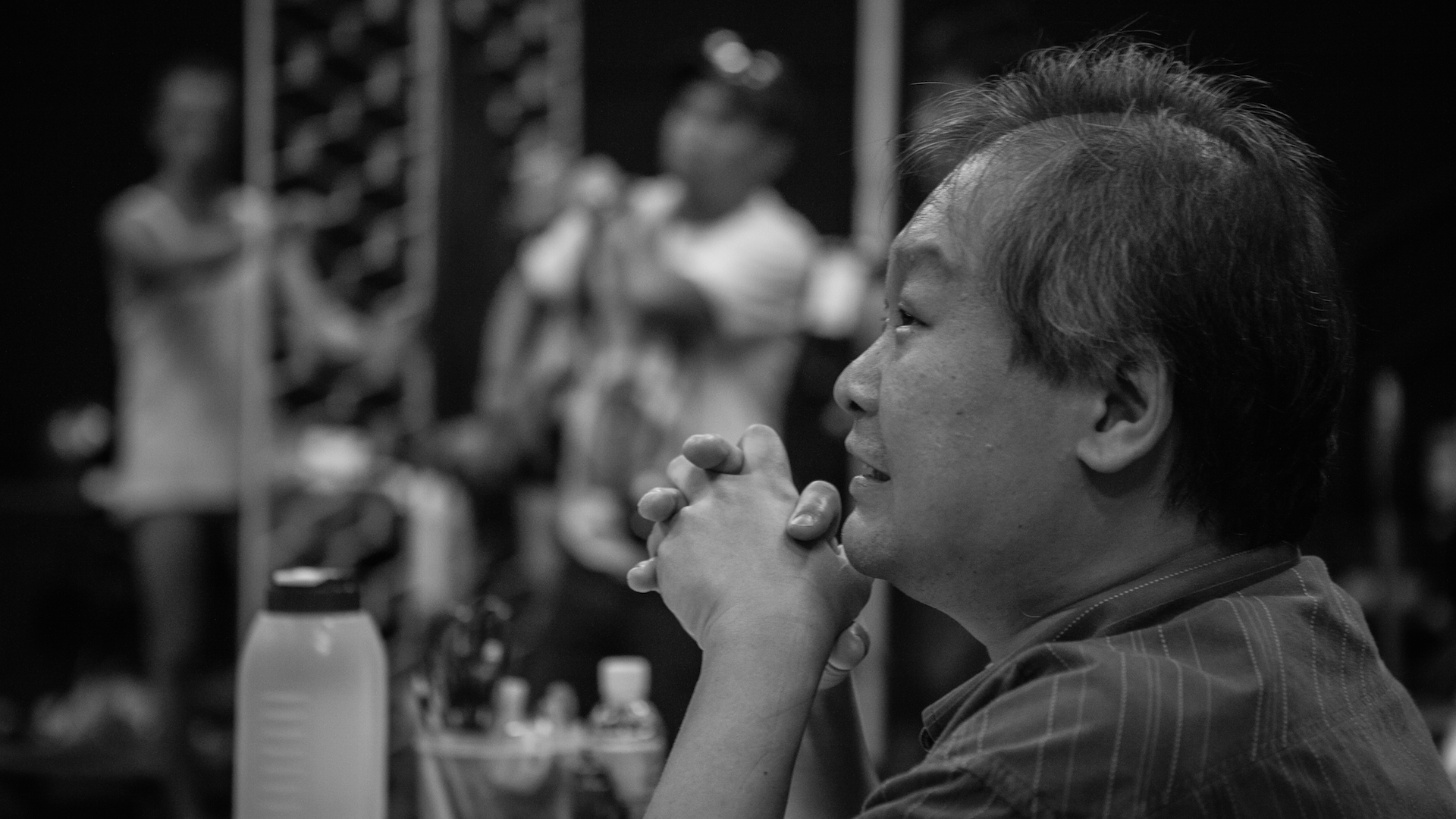 This article is one of three pieces on ArtsEquator this week focusing on the people, plays and processes of The Necessary Stage, which celebrates its 30th anniversary this year. Aside from Felipe Cervera’s profile of Alvin Tan, we also feature Akanksha Raja’s personal reflection on Off Centre, and an interview with Edlyn Ng and Shawn Chua on the upcoming online TNS Archive.

ArtsEquator commissioned me to write this piece with the brief to shed light on the work of Alvin Tan. My reaction was to offer precisely that, but with a twist of homage. This text, then, is that, a hybrid of critical analysis and of a felt recognition to Alvin as one of my dearest teachers. The following text narrates my impressions and analysis of aspects of his labour that remain somewhat hidden from the public eye. The analysis considers my own experiences after working under his direction in several capacities – an experience that a veritable who’s who of makers in Singapore have also had.

Alvin is an important nexus of Singaporean theatre, and this allows him to stand at a fascinating intersection of Singapore’s contemporary cultural life. Alvin is a theatre director, a company director, a theatre pioneer, a mentor, a son, a social media superstar, a reference, a friend. But he is also an activist, and his interest in community development has had repercussions for all of us – even when we might not see his face as often in both the critical and journalistic coverage about The Necessary Stage’s work.

Alvin has a marked tendency to multitask, both in the sense of having several productions running at the same time, as well as being engaged with multiple agendas outside of TNS. Alvin’s tenacity in maintaining engagement with the extra-theatrical dynamics of the arts industry – education and policy making, mostly – are indicative of a vision that only a few makers in Singapore are able to have and that certainly results from being one of the first few to go full time into theatre. Among these big names that have been around for three decades or more, Alvin is somewhat less visible but no less politically agile. His involvement as an active lobbyist for current and previous Arts Nominated Member of Parliament demonstrates the above: he is not the poster child, but he is always there.

Alvin’s vision for a socially committed theatre goes hand in hand with the idea of theatre being an instrument for social change. Essentially, however, Alvin answers to a bigger call which is obviously political, clearly Singaporean, distinctly his, romantically theatrical but above and beyond anything else, fundamentally – necessarily – human. Alvin wears many hats because he can’t get enough of life, because being a romantic impedes his ability to relinquish even the tiniest thing that may hold promise. Such is the mark of his theatrical zodiac: a person who multitasks as he goes on living in the ineffable, both outside and inside the rehearsal room.

About the rehearsal room

‘Scenes first; transitions later’, Alvin emphatically told me as I insisted we work on one of the transitions during the staging of Gitanjali [I Feel the Earth Move], sometime during the summer of 2014. The words resonated deeply in the rehearsal room and echoed especially in the face of Haresh, whose characteristic twist of mouth was already telling me that that’s how they work.

The phrase means two things: firstly, that at the time of devising, one should focus more on the bits of material than on the transitions between them. This is a creative strategy that relieves the group from any predetermined constriction of what the work should be, in order secure a better position to identify the ‘could be’, the ‘might be’ and the ‘not sure’; it is a way of keeping the process open both in structure and content. However, at a deeper level, ‘Scenes first; transitions later’ involves the creation of a wealth of material and of several drafts; it involves the maintenance of several possibilities that might eventually be played together and assembled as a show. In other words, ‘Scenes first; transitions later’ means hoarding as a method of theatre-making: you accumulate possibilities, and if they don’t work, you keep them; they might be useful for another show. Everything might be necessary.

The form is method, and the method is the message. Alvin and Haresh’s insistence in this care for the moments, at the expense of their sequence, translates into the characteristic textures of much of TNS’s work. Stories are thread like a pearl choker, minding less about whether there is a formal progression from pearl to pearl and more about the way they look when put together. In my view, we can see traces of several influences in this methodology: Kuo Pao Kun, the forum theatre training that they received during the 1990s (and that I would argue has left an indelible mark in the particular style of Haresh’s writing), and to Alvin’s fascination with the works of Caryl Churchill and The Wooster Group, among others. This is indeed an interesting mix, one that brings together a heavy social investment into the process of theatre-making while at the same time enabling them the ability to navigate the often nebulous seas of postmodern aesthetics.

Everybody who has had the privilege of working in that basement at Marine Parade (or Cairnhill Arts Centre, TAPAC, or Alvin’s bedroom before) knows that this strange mix is only effective when Alvin and Haresh are in tune. It is a tacit understanding too that Haresh is usually the commanding voice in the room, while Alvin plays the part of the director that looks and comments on whatever is unravelling. What we must understand in order to perceive the inner workings of that rehearsal room is that these are not two creative minds working together. This is TNS’s greatest device – which we can call AlvHar in allusion to the fantastic characters of China Mieville’s Embassytown who can’t communicate with the world if they do not speak together.

The attunement that happens in AlvHar exceeds the dynamics of the rehearsal room and is also an exemplary case of institutional vision. I think that it is not a coincidence that Haresh is the creative face of the company. In the end, as is often in the case of theatre histories, it is Haresh’s text, and not Alvin’s direction, what will remain in the bookshelves and be taught as Singaporean theatre in the present and in the future. I think Alvin knows this. He also knows that in order to secure the company’s legacy, he needs to wear different hats in the political and public life of the state’s cultural institutions. Yet, I also think that he knows that paramount to that project is securing the memory of the work as it is being made.

It is 8:47 am of Thursday, 4 May 2017. I just did a quick check on Alvin’s Facebook profile. He has shared fourteen items there since this day started. And I am also sure that in the same period of time he has read and replied at least a dozen other posts elsewhere in the trenches of social media. Alvin spends much of his time online, and he does so not as a cyber-voyeur that reads whatever juicy post appears on his feed. He provides, shares, and reposts all sorts of content. He is a relentless social media superstar.

What many of his contacts in social media might not have noticed, is that in between sharing news, inspirational quotes and images marketing the next production of TNS, he also keeps an online archive of the company’s work. The key thing here is that often he is compiling those archives as the work is being produced in real time. It takes mere minutes before a moment in rehearsal is recorded in the perpetuity of social media. Like the file folders at TNS’s office, Alvin’s two Facebook profiles are archives of TNS in themselves; dozens of albums, often two or three of the same production, or of the same event, can be found. This is disciplined Facebooking – no jokes: each picture labelled, tagged and stored; captions duly noted and credits given. And these are the ones that are public. I know that there a few more that are private and for the exclusive use of the company during any specific production.

Alvin’s Facebook archives are digital hoarding at its best. Keeping track of everything means “archive everything” as much as “remember everything”. These are political gestures that express the necessity to remember that theatre has been part of this city for decades. But, at the same time, these are also profoundly human gestures, impregnated with fear of being forgotten.

It wasn’t even an hour after I have landed on Singapore on 2 January 2012 that my partner, Fezhah had already gotten me a job at The Necessary Stage. TNS’s general manager, Melissa Lim, had some reservations, I remember, for not only was I a newcomer into the know-hows of theatre in Singapore, but I would be directing one of the shows programmed at the Fringe that year. I had already interviewed Alvin while doing preliminary research for my PhD application to NUS, but that just made things messier – too many hats on the same person, I suppose Melissa imagined. Even so, the generosity that the company has had throughout its history with newcomers was extensive in my case. By the time I finished unpacking my stuff at my in-laws’ flat in Woodlands later that day, I had already received my rehearsal schedule to work at the show that would open the company’s 25th anniversary season.

How could I not start loving this country – not even a couple of hours in and I already had love, a bed, food on my plate, and a job. What else can a migrant Mexican ask for?

I attended my first rehearsal as assistant stage manager for godeatgod a few days after. A significant part of my role was keeping the rehearsal reports in check. I had heard of audiovisual documentation, of notes and of journals … but I’d never of a “rehearsal report”, which turned out to be a very detailed account of whatever goes on during a rehearsal. Not once in my professional career, even when I’d worked for a while as technical director of Mamma Mia! The Musical in Mexico had I seen such thing. ‘This is incredibly corporate,’ I thought to myself on more than one occasion.

Writing those reports was tedious work, and I soon realised that one or maybe two people in the group were, in fact, reading them (Melissa was one of them); more than once I had to explain to the actors what was already detailed in the report of the previous day. I felt that my work was redundant. I landed myself in a conversation with Alvin, who, in his very characteristic style of arguing, said emphatically, “The reports are important because sometimes we create so much material during rehearsal that we forget, but they are also very important because someone might want to do research about the work, and when that happens, the reports will be useful.”

1986: A group of students at NUS decides that making theatre is necessary. Fools in full-blown stubbornness, this is a group in which no one has formal training; no one knows the rules of theatre-making. Yet, no one cares. They do their scenes first; the rest will become clearer later. And so it came to pass.

Guest Contributor Felipe Cervera is currently completing a PhD in Theatre Studies at the National University of Singapore. He holds an MA in Drama by Practice-as-Research from the University of Kent (UK), and a BA in Dramatic Literature from UNAM (Mexico). His essays have appeared in Investigación Teatral, Performance Research, Performance Philosophy, and Theatre Research International. As an actor and director, he has worked in Mexico, UK, and Singapore.