When you hear the word “critic”, what image do you conjure?

I used to imagine a bespectacled person; bookish, extremely serious, and tough to please. From my point of view back then, critics were people you would find writing or talking about works of art, often or almost always using sophisticated vocabulary and generously peppering their speech with confusing jargon.

I used to feel intimidated by them. I felt they were more intelligent than me.

My first encounter with criticism happened with my Standard Five class teacher. She told me point blank that I was stupid and would amount to nothing, because I had turned in “rubbish” homework. I still remember that she was bespectacled, always roaming the school corridors carrying a stack of books, never smiling and easily displeased. I believed then that her sole mission in life was to find fault in people and things – she did this quite remarkably with panache.

She was the harshest critic my 11-year-old self had encountered and although I was not prone to self-doubt, for a time, I almost convinced myself that I was thoroughly incompetent. I’m glad she had only taught me one subject and that was Malay.

Those early-day impressions instilled in me a severe dislike for critics.

Criticism or critique, I couldn’t tell the difference and I didn’t care

It seemed as if all critics stood by the same simple formula:

This is why, despite growing up and going on to become a journalist, published writer, content specialist, and co-founder of an arts and culture community portal, Eksentrika, I generally stayed away from the formal work of “critiquing”. I couldn’t fathom that it could be done fairly and responsibly.

Flashes of my 11-year-old self play in my mind when I try to critique someone. How do I even start? Do I start with the bad news first? That the artist’s attempt at replicating Yayoi Kusama’s sculpture and painting actually resembles a terribly sad looking giraffe with jaundice? Or would it be better to start off diplomatically by first pointing out the bits I did like, scarce as they were, before dropping truth bombs such as: “Hey man, please put the brush down and get a 9 to 5 job”?

Not being able to find a careful middle ground, I decided it would always be better to err on the side of encouragement.

I never wanted to be the one to stifle or kill off an artist’s expression with my subjective and often extreme judgement. This led me to stick to the positivity path, and often I tend to gush along the lines of “Omg, I love this! Keep arting! #Persevere #ImproveEveryDay #OneBrushStrokeAtATime”

Psychiatrist and psychoanalyst Carl Jung (yes, this is how name dropping happens, as aforementioned) says that the human ego is a major reason we individuals have feelings and a sense of identity. It helps us to make meaning and come to terms with the continuity of our existence.

The personal ego is also a significant driving factor that leads someone to pick up a brush and paint, create, sing, dance, and act. Our desires to become that famous artist, bestselling author or award-winning musician has been known to compel us towards excellence and fierce pursuit of fulfilment.

Yet the same ego can equally create paralysis, and stifle even the most talented among us with fears and doubts. I have met many brilliant souls who fail in their strides, due to apprehensions that cripple their potency, killing it before they even attempt a single step. The ego can inflate when there are compliments and deflate with the slightest criticism.

Critiquing is meaningless and hilarious, or is it?

During my stint as a publicist for the Kuala Lumpur Performing Arts Centre (klpac), I came to observe numerous occasions where theatre directors decided to make ever the slightest change to their script, prop, costume, or stage set. Initially, I felt these changes carried little to no meaning.

Oftentimes, many theatre directors and cast members would be caught off guard, for example, using a brown stool for a divorce scene because they were actually out of chairs. Yet, some genius could come to clever conclusions that symbolism was at play, making allusions that having the character sitting on the brown stool while being served the divorce was a representation of the ex-husband being a piece of sh*t. These types of conjectures usually had me in stitches.

I only changed my mind recently, after meeting with professionally trained critics at the Asian Arts Media Roundtable (AAMR) held recently by ArtsEquator in conjunction with the Singapore International Festival of Arts (SIFA). 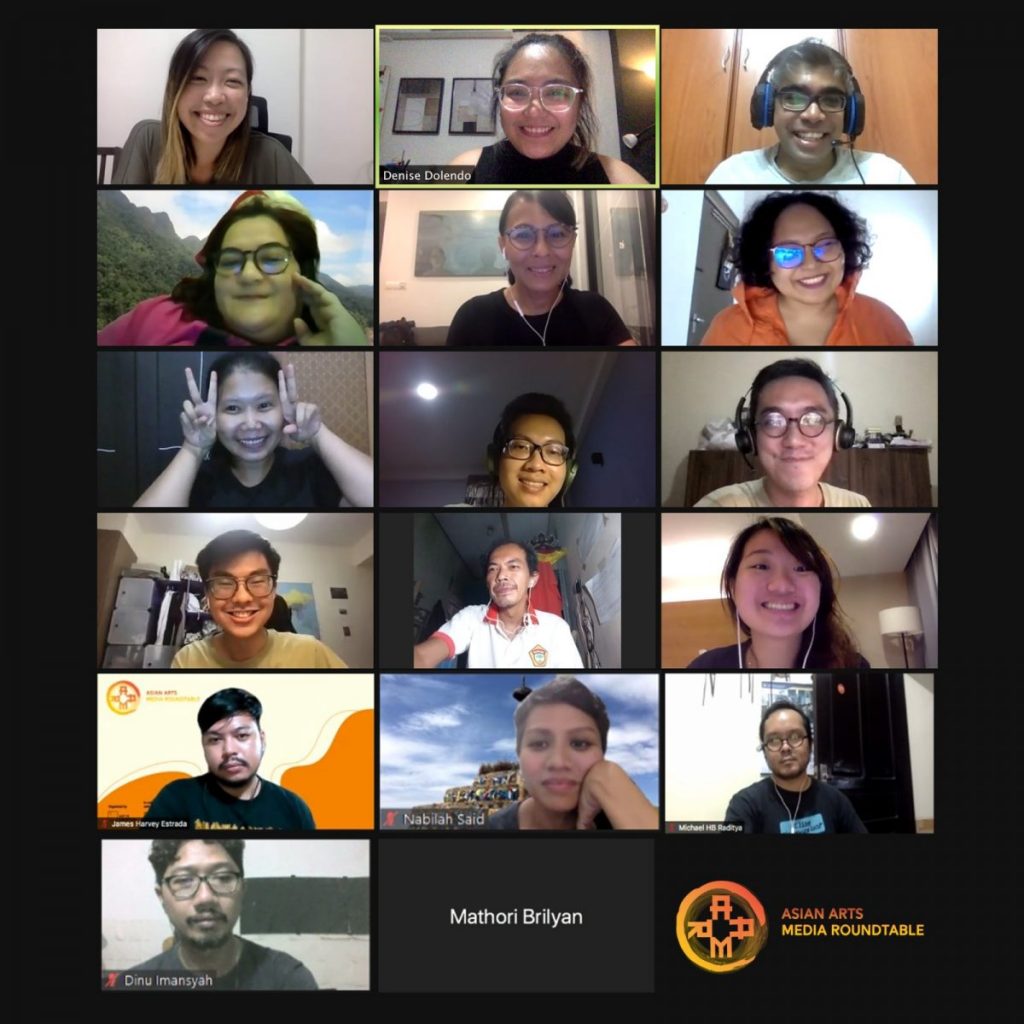 Between 18 May 18 to 12 June 2021, I had the opportunity to interact with theatre practitioners, watch SIFA shows virtually, and discuss what exactly critiquing is all about through the AAMR programme. It was a relief to learn that, like me, others, some of whom are also art critics and journalists, shared similar misconceptions, fears and insecurities about the nature of critique. And these were prominent personalities in their own right, raising the bar in their respective local art scenes from countries such as Indonesia, Singapore, the Philippines, and Malaysia.

One of the goals for this year’s AAMR was to shed light on critiquing elements that were often overlooked: lighting, costume, set design, multimedia and video. Through four presentations led by experts in the field, every participant involved in the AAMR received our very own humble pie. It was an eye-opening session that shone a spotlight on the importance of acknowledging the production and technical aspects of the performing arts.

We gained further insights through watching virtual shows followed by live sessions of critics critiquing these works. I finally experienced firsthand and could observe how critics analysed a particular work of art when I joined the Critics Live! session on The Year of No Return by Necessary Stage, presented as part of SIFA. The ground-breaking interdisciplinary collaboration saw many individuals from the Asia Pacific region coming together to stage a performance on climate change. 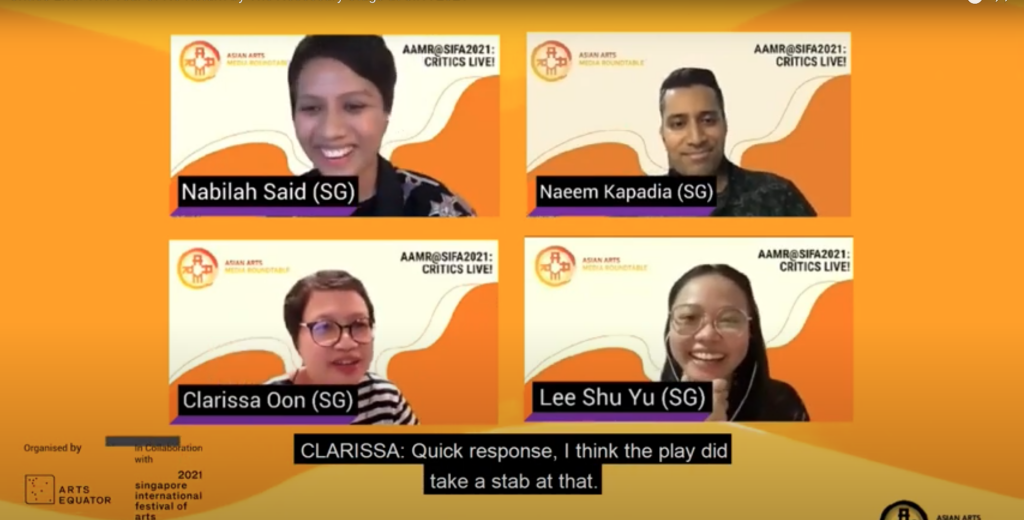 Within the approximately hour-long session, the critics explored and shared their take on the effectiveness of the performance to raise awareness on a global issue that had various contexts and challenging complexities. Instead of merely oversimplifying it away, the critics addressed the treatment of the issues by examining the layers after layers of ideas, dissecting the story, analysing the choices of creative direction and even nuances in the dialogues to derive a deeper meaning of the performances.

It blew my mind and radically altered my views to the point that I was able to discard those initial misperceptions I had about critics, especially art critics.

Critiquing, I discovered, is like walking into a garden for the first time and discovering the interconnectedness of the entire ecosystem. And then, like scientists, we could be probing further, experimenting and exploring questions such as, “What would happen if any number of elements were to be added or removed?”

Critiquing is about gauging deeper to detect a more nuanced perspective. It is definitely not merely attributing petty likes and dislikes and deigning to give one or two star ratings.

The task of a critic is not an easy one and those who take it lightly, do so at the peril of the arts and the artist.

Based on my observations from attending AAMR, I believe criticism can be constructive, incisive and necessary for us to improve the arts and culture industry as a whole. We can benefit from each other’s points of view, if we are able to suspend our malicious or self-serving natures to provide honest, constructive feedback. It requires us to build trust for one another, that we may accept, validate and see merit in opinions we find disagreeable.

Towards the end of the AAMR, I came out asking myself why I had been so afraid and opposed to the idea of critiquing? Was it truly the fault of that overbearing school teacher in my youth? She was stating her mind unfiltered, albeit in a condescending manner that I experienced as abrasive. Perhaps, I had a weighted role with my atrocious grasp of the Malay language.

The point I’m taking away from this experience is that empathy and criticism cannot exist without the other, for it to be well-intentioned and thus well-received.

That said, I think we all could use more opportunities to critically listen and dialogue with those with differing world views and expressions, towards mutually advantageous, even if different goals. Isn’t that the virtue of community after all?

Beyond staged performance and exhibitions, in the real world of advocacy and journalism, criticism can land one in jail, subject to censorship, harassment and even murder.

In an era of rising activism and vocal agency among regular folk on the Internet, how will we treat our artists pushing for a cause?

When faced with critics, should artists take it as an affront to their talents or use it as an opportunity to generate a stimulating discourse? Personally, returning to my desk at Eksentrika, I’ve come to deeply appreciate the merits of the latter much more.

A version of this article in Bahasa Melayu can be found here.

ArtsEquator is proud to be present the Asian Arts Media Roundtable (AAMR), which ran from 15 May – 12 June 2021 as part of a collaboration with SIFA 2021.

Sukhbir Cheema is a writer, cartoonist, and co-founder of the arts & culture community platform Eksentrika which he manages together with his wife, Ista Kyra. He also heads Mashable Southeast Asia.