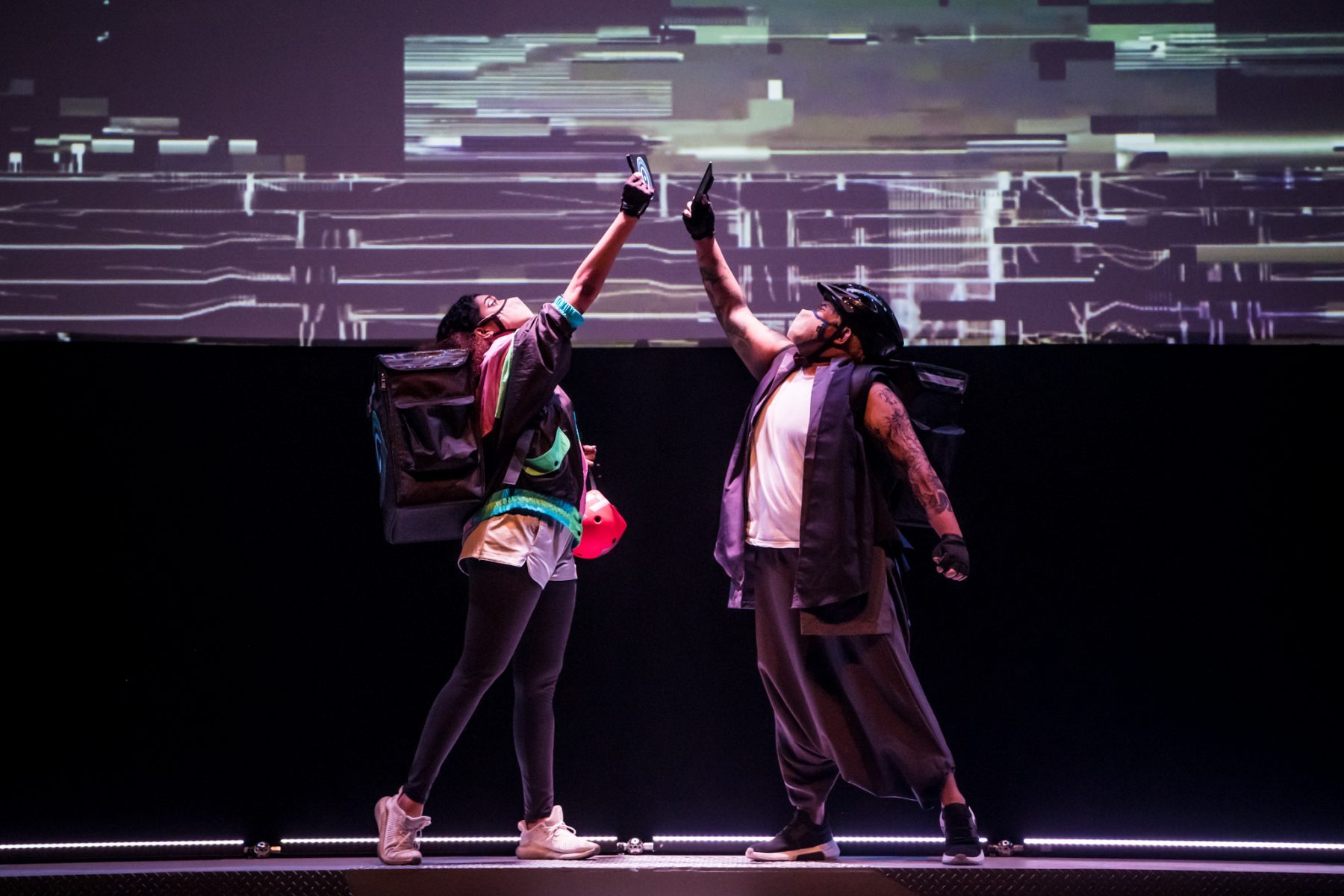 Nabilah Said speaks to Safuan Johari, Rizman Putra and Brandon Tay of Zeugma on their current show _T0701_ (say “toyol”, it’s much more fun), currently available via video-on-demand at the Singapore International Festival of Arts. The show explores a pseudo-futuristic Singapore via the eyes of protagonist Jati, a delivery personnel who navigates the surveilled roads of Singapore via his trusty PMD (personal mobility device). Jati and fellow colleagues Versace Lawrence and Azizah Techno represent the digital working class, presided over by the all-seeing MegahCorp, while Jati’s mother Cik Rabz inhabits a liminal world unlocked via her bomoh prowess. The play is written by Zulfadli Rashid (Big).

[This interview has been lightly edited and condensed]

Nabilah: Ok so _T0701_ is actually “toyol”, right? What about this theme, the toyol (a sneaky child-like spirit) or the idea haunting maybe, did you want to explore?

Safuan: When we were discussing things initially, I shared with them the whole idea of the mutation of power, how power shifts. Me and Brandon are big fans of filmmaker Adam Curtis, who creates documentaries about current socio-political situations, and all he does is use archival footage from the BBC. His latest one, Can’t Get You Out Of My Head, talks about how power mutates – about how it starts from political ideas or politicians, and how things are run by the banks right now. It resonated with me – how about ordinary people, your everyday man? How does power mutate for us at a very micro level?

Brandon: The series also talked about what kind of person it takes to create a mutation in power. Think about people who’ve really changed the world, right, they are usually quite crazy, or there is something about them. I think that in the show, we can really see it in both Cik Rabz and Jati – what is it about their personality that allows them to change either who they are, or change the world?

Nabilah: Can you unpack “mutation of power” for our context?

Safuan: There’s constantly a power shift. But what is unique about us right now is that power seems to be this invisible force. You don’t know where it lies – whether it’s in the politicians, or in the funders or the source of the money which is funding the politicians and all that. Especially back to the whole idea of the working class. What influences our own personal self or our agency, or the day-to-day of making a living (which is money). And then of course, the close personal relationships around us. Even minute by minute, the power that is being enforced on you is constantly changing. Even when you are experiencing your web browser, or going through Facebook, whatever is being pushed to you is based on certain algorithms.

Brandon: We can also make a parallel of what power is with what Cik Rabz is doing on a metaphysical level. In the world that she lives in, there’s no difference between the kind of power that we experience in our daily lives or that we experience with technology. She exercises it in a metaphysical way, and I think that’s a throughline. There is this constant of ‘who’s exerting power and from whom’, and it has been constant with or without technology.

Safuan: Another thing to add is how your agency and action cast spells on others as well. It’s a two-way relationship. You’re absorbing some and you’re giving up some too, no matter how small a degree.

Nabilah: Okay, maybe we’ll go back to that in a bit. Can you talk about the VOD experience?

Safuan: What’s great about the VOD is that we managed to shoot the cast on stage without masks, so that’s definitely a bonus. And then Brandon created this standalone app, which can operate on your laptop or your desktop. It’s a game environment which unpacks bonus materials, where the individual characters go through their internal worlds and you go into their backstories. Cik Rabz would talk more about her toyols. And Jati’s backstory, in terms of what happened to his dad. So you navigate the world, find cyan orbs with which you can unlock some lines, and explore a greater environment, just like playing a real game.

Brandon: I think it gives a lot more volume to the characters.

Safuan: It’s an extension of the environment that we collectively thought of. For Versace, Brandon created this super absurd, hyper realistic environment of what he envisioned Shenton Way would be in this universe. In Cik Rabz’ Wonderland, you can see the toyol training camp.

Nabilah: Does the audience have agency in playing with this app? Or is that not part of the point of it?

Brandon: Agency in the sense that you can explore their lives or their thought processes, I guess? I think that’s a form of agency. People talk about interactivity or agency in digital work and I think we forget that sometimes all we have to do is to just absorb information. I think that’s a very overlooked thing about interactive work, that you have to do a lot of things for you to feel something. But I don’t think it has to, I think you just have to allow yourself to feel stuff.

Nabilah: Rizman, how do you see your role now, especially as you’re having to deal with the VOD aspect?

Rizman: It’s two different experiences. For theatre, the live presence of the actors makes a lot of difference. You can never replicate a live performance. The energy, the space usage, and the idea of just being in the theatre and totally immersed in the world.

Nabilah: Do you see yourself changing in terms of what you are prioritising with the VOD, different camera angles and all that?

Nabilah: Zeugma uses multimedia quite a lot in your work. Do you feel that in the world of COVID-19, with performances going hybrid and all, that you are dealing with something that you’re quite comfortable with – in terms of the languages that we’re dealing with?

Brandon: I think the blanket thing is that everybody’s very uncertain about everything. That uncertainty gets passed through both in the ideation process and in the production process, as this general anxiety. Everybody’s really anxious, they don’t know how things are going to change. I think what’s important to address is not how technology can change the way that we make performances, it’s about how to make people less uncertain in general. Like giving people more assurances about the kind of work they can do. I think that’s the basic thing.

Technology changes on its own all the time. Obviously, with COVID, technology has changed the way that we make art. But technology has always done that. There’s an entire history of works that combines performance and technology. So instead of trying to scramble for solutions based on uncertainty, based on a recent history of solutions, why not just look into the history of the media, see what has been done? That way we’d actually have something that is more certain.

Safuan: I think my note to other creators is to not just see things as a mere disruption. Just look back and see how it can help you. Don’t narrow it down as a knee-jerk reaction. See it as a bigger picture. How has technology led us here? How can it help us further? Don’t take it as an isolation.

Brandon: Don’t take it as a solution.

Nabilah: Rizman, what do you think about this?

Rizman: I feel like at the end of the day, artists will find ways to create. They should use the disruption as a point of reaction to create new things. At the same time, we are all experimenting with this production. I think we’ve learned a lot about what we can do and what can’t for the next project, probably.

Nabilah: The interesting thing is that your show is also about technology, so it’s not something that’s outside of it only, but part of its themes. Rizman, you called it Black Mirror.

Brandon: There were moments, just before we went into SOTA, where things that were happening in the news were things that we were thinking about in a version of the script. It was crazy, I thought I was losing my mind.

Brandon: Grab had this pilot programme to get their drivers to train autonomous delivery bots, to better navigate to different restaurants within a shopping centre. But in the process, they’re making themselves obsolete, because they were training the thing that was going to replace them. We were thinking of using this in the script at one point. It was crazy.

Nabilah: Any final thoughts for audiences who are only catching the online show?

Safuan: What’s great about the VOD is that after they watch it, immediately they can download the _T0701_APP and get the immediate experience of it, while the storyline is fresh in their head.

Brandon: Like what the live audience didn’t get, I guess?

Safuan: Yeah. For us as creators as well, it fills a lot of gaps for the show.

_T0701_ is available till 20 June via video-on-demand. More info here. Tickets for individual shows are $15. You can also get the all-access bundle of 17 programmes for $60.

This article is sponsored by the Singapore International Festival of the Arts.