It was a laid-back day at the end of April, when I got the email from ArtsEquator informing me that I had gotten into the Asian Arts Media Roundtable (AAMR) at the Singapore International Festival of Arts 2021. This was to be the start of my career as an international arts writer and researcher, so I was very happy and excited to hear the news. I thank my senior, performance artist Abdi Karya, who personally encouraged me to apply for this programme. Being part of AAMR felt like a match made in heaven. I started to Google past AAMR events to see what I could expect, and read that AAMR 2019 was a two-day meeting full of discussion, networking, and speeches from important Asian art writers and media. From the photos, it appeared to be a professional environment with a dash of casual talks, held in Singapore.

My immediate (anxious) thoughts before I attended the sessions are: “Do I need to be intense and accomplished like those participants? Will I really have a place to say something in the forum, as I still consider myself an emerging arts writer?”

I guess the only way to allay the anxiety (or maybe keep questioning it) was to jump into the thick of AAMR itself. I thought I would get light networking sessions and ‘just fun’ learning webinars – little did I know that I’d get more than that.

Apart from running sessions virtually, what AAMR is doing differently in 2021 is its collaboration with the Singapore International Festival of Arts (SIFA). This benefits us participants because we will get learning materials and start to practise it at the same time – a refreshing move. AAMR 2021 was held as a four-week integrated programme; this gives participants enough time to process all the topics learnt through the talks and perspective exchanges. Besides that, the longer time span of the programme inculcated a sense of community among the participants, as we had more time to get to know each other, professionally and personally.

On the first day, I saw that the group comprised a diverse mix of writers and critics from around Southeast Asia, not just in terms of nationality, but also in terms of backgrounds, perspectives, even their sense of humour – which made the Southeast Asianness distinct. These were brought out more in the more private weekly “T-room” sessions, where we had semi-casual discussions centring around our work and views as critics.

Although this year’s sessions were held on Zoom, it did not dampen the enthusiasm of people in the programme. In the first meet, participants watched The Journey, a live media performance by illusionist Scott Silven that was part of SIFA. The Journey is an illusion show – although we might commonly call it a magic trick performance – which in my opinion enriches SIFA’s artist lineup.  It sheds light on the need to see beyond conventional labels of performing arts – apparent during T-room, when we discussed if an illusion show can really be considered as art in the first place. In the T-room, we spoke about its format, and everyone started to puzzle about critiquing a mediatised performing art work that is consumed virtually. These concerns were later also reflected in the public event, Critics Live!,  where we had the opportunity to listen to four critics’ judgment of The Journey. Watching The Journey was a great start for the AAMR, as both a common experience for the participants, as well as a provocation for us to reevaluate our views on the current state of the performing arts.

In Yogyakarta where I am based, the vibrant arts scene has come to a halt because of the pandemic. A lot of performances and exhibitions were either cancelled and moved to the virtual form. This prompted everyone in the arts scene to search for various methods to adjust their artmaking and really engage with the audience; for example how virtual interactive festival Huhu and The Multitude of Peer Gynts by Teater Garasi became some kind of catalyst for upcoming virtual live performances for Yogyakarta artists and how Komunitas Sakatoya gave an alternative method of live theatre with a dash of nostalgic TV feeling with their participatory show, The Happy Family.

At a time when art practitioners are adapting to the pandemic and figuring out the future of live arts, the AAMR gave us the space and support system to discuss our concerns about the arts and cultural dynamics these days. We talked about facing similar issues of adjusting our perspective when doing criticism of works presented in hybrid situations, both virtually and onsite. Are there major changes in criticism if performing art forms are altered? How should we really critique virtual and/or mediatised performances? These seemingly epistemological inquiries were raised in the T-room by the participants in a quite relaxed discussion. But these are definitely not easy questions to answer.

Another component of the AAMR, the in-depth Master Conversations sessions, were really eye-opening for me as well. We were introduced to the more technical aspects of theatre and performance, such as lighting, costume and set design, in order to expand our scope as writers and critics. According to the Zoom polls done during these sessions, the themes presented at the Masters Conversations were still “not brought to justice” within the reviews written by the participants themselves. Singaporean lighting designer Lim Woan Wen, in a session facilitated by critic Daniel Teo, shared that designing lights for the stage needs a balance of creativity, as in aesthetics, and scientific thinking. To engage and observe the lighting design in theatrical performances means that we are enhancing the sensory experience both for performers and the audience; through our critique, we can finetune details that were put by the show creators and give personality to what is mechanical. Lighting design can become a communication tool from the performer to the audience. I also realised that whatever I had seen and written, which had primarily been about dramaturgy and acting, would not have been evident were it not for the good lighting designs. (My fellow participant, James Harvey Estrada, also reflects on the session here.)

The session with UK costume designer Catherine Kodicek and critic-facilitator Lyn Gardner was particularly interesting as it ignited discussion about activism done through the work of a costume designer. Catherine talked about how empathy and sensitivity is part of the work of the costume designer; not just merely providing clothes for the performer. She also introduced the importance of advocacy in storytelling and deep research regarding costume works, especially when working on a production based on real events and involving people of colour, or communities who may be sidelined by a majority. (Read the reflection by fellow AAMR participant M Dinu Imansyah here.)

These talks gave us an awareness that technical aspects in stage shows are never trivial or random, but add to the discourse for performative arts. They are not “underrated”, and have been unjustly neglected by critics and the arts community.

The expectations and lessons learned (so far)

I was actually expecting new views and opinions among the critics on how they perceive performing arts these days, but I think this adjustment will take more time than I expected. This pandemic has really given us the sensation of a “hangover”, with most of the participants still longing for the performing arts forms of the pre-pandemic times. The critics in the room (including myself) talked about how the pandemic became a burden, and based on that fact, I proposed that arts writers and critics should try to think outside of this universally impacting hindrance box. Everyone in the arts ecosystem is expressing their uncertainties during these trying times, so it was empowering to gather and support each other, and I think that we should do our utmost to utilise this platform. I really feel that writers and critics can do more than question and be nostalgic about what it should have been, given the present circumstances.

AAMR@SIFA 2021 facilitated the writers and critics to think beyond what we were comfortable with. We were not only exposed to various aspects of performance that can enrich our observations and writings, but were also invited to see performing arts in a new light. The AAMR programme suggests that writers and critics should really step up in this new era of mediatised performing arts. Though we might find it uncomfortable to broaden our views on performing arts nowadays because we still miss the live stage feel and due to cultural differences, isn’t adapting also part of being an arts writer and critic?

As a part of the arts ecosystem ourselves, we cannot really separate our existence and significance within it. We might make the effort to be objective and show that we are the the appraiser of artists’ work, but in a time when the cohesiveness in the arts world is needed, we have to take baby steps to move forward together, because we have to accept that the arts will not be the same in the coming future. The knowledge shared in Masters Conversations, the sense of togetherness in the T-room, and the viewpoints presented in Critics Live! can be the starting points for us to realise our place in the arts world by challenging ourselves to widen our references with an open mind and an open heart, to lay the foundation of a better future for arts criticism.

ArtsEquator is proud to be present the Asian Arts Media Roundtable (AAMR), which ran from 15 May – 12 June 2021 as part of a collaboration with SIFA 2021. 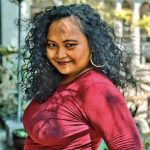 Gladhys Elliona is an author, arts researcher, and actress from Yogyakarta, Indonesia. She gained her MA in Performing Arts and Visual Arts Studies from Universitas Gadjah Mada. She had been professionally active in the theatre scene since 2014 as an actress in various musicals and plays production. Gladhys had presented her theatre studies research papers on University of Hawai’i at Manoa and City University of New York in 2021.