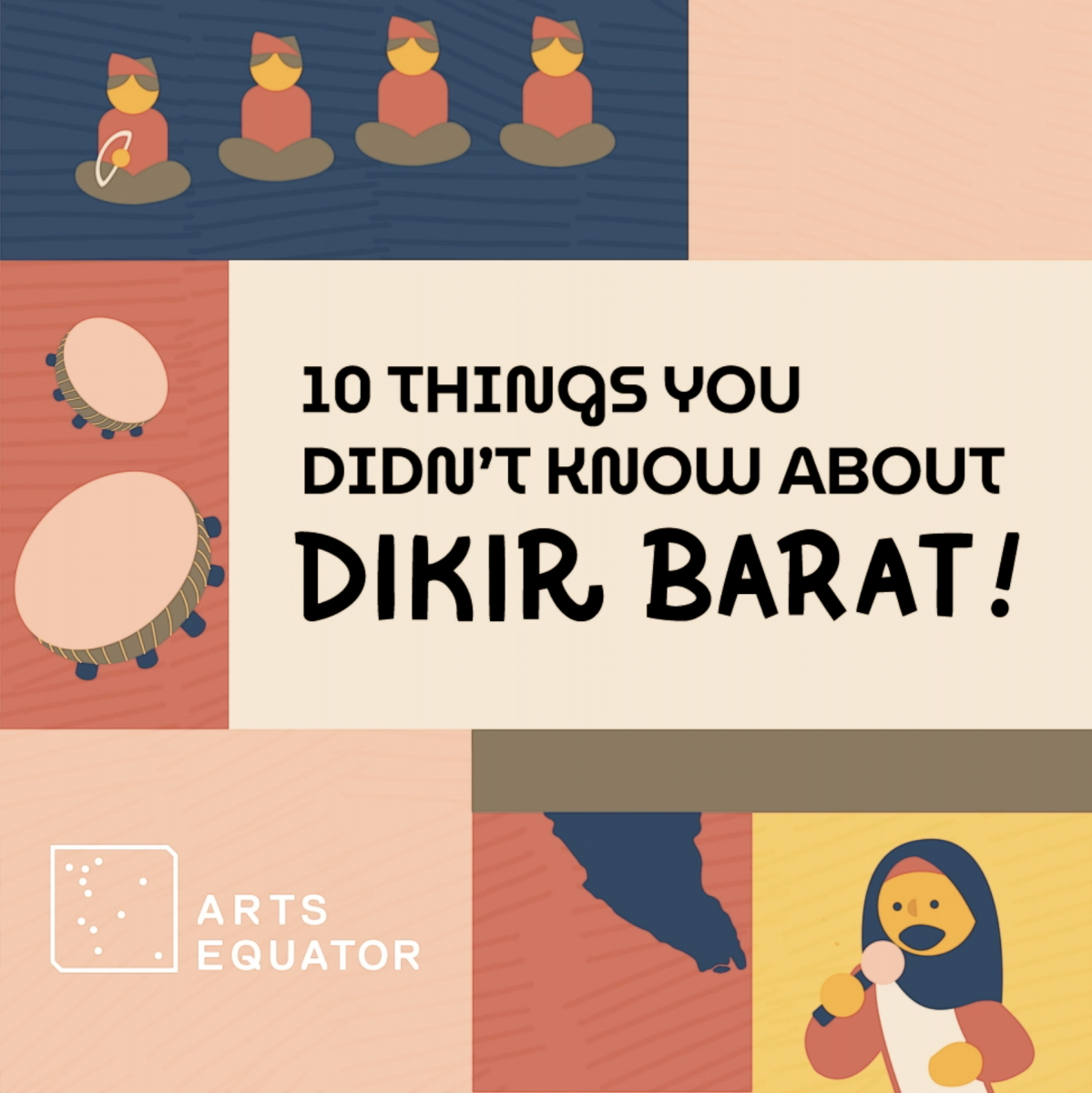 Most Singaporeans recognise traditional artforms such as Bharatanatyam, wayang kulit and wushu. However, there are many other interesting forms which may not be as known, especially to the younger generation. 10 Things is a series of three short animated videos, each focusing on a lesser known traditional artform – Dikir Barat, Kavadi Attam and Nanyin.

In the first video of this series, we share 10 things about the Malay traditional artform, Dikir Barat. The video features the work of illustrator Joy Ho and animator Jawn, as well as music and sound courtesy of Razzi M Production.

The accompanying text below, prepared by Soultari Amin Farid, includes more facts for an in-depth look at the form.

1. Dikir Barat’s origin is from the northern state of Malaysia, Kelantan and the borderlands of southern Thailand with Kelantan. The term “Barat” which means “West” in Malays alludes to Malaysia’s western neighbour, Thailand. It was banned in the 1990s by the state’s religious government and when the ban was later lifted, it had to abide by some restrictions. This is a video of how Dikir Barat in Kelantan is usually practised, featuring the iconic circular setting.

2. Dikir Barat began to be practised in Singapore in the 1980s, introduced by the increasing numbers of Kelantanese construction workers into the country. Its booming popularity in the 1990s saw performances and competitions being held at community centres, which made Dikir Barat into a communal activity that was inclusive. It also became an avenue of support and the home ground for many practitioners. As it became a performance artform departing from the social norms of its origins, practitioners had to structure it for a stage presentation.

3. The performance space of the Dikir Barat is organised according to the specific roles within the form. Dikir Barat has four different roles: on stage right is the awok-awok (chorus); the tok juara and tukang karut are the frontmen/women, the soloists of the team placed at the front left stage and behind them is the paluan or the percussion team. The number of performers for Dikir Barat performance at any one time ranges from about 15 to 30.

4. The Dikir Barat can be considered a sitting-musical because it is a multi-disciplinary artform inclusive of four main elements:

5. The movements are usually created based on the meaning of the lyrics, and can also be influenced by some of the creative percussive composition to add a tinge of virtuosity and relationship with music-dance. Most times repetitive and executed whilst sitting down, the tiered position of the awok-awok allows for different choreographic strategies, like the canon (domino effect) and layering, wherein alternate members will execute different motions to that of the member beside them.

6. The awok-awok’s movements are punctuated with claps and the clapping technique requires training. How the palms of the hands hit each other produces a rounded clapping sound that is thunderous, yet inviting to people from afar. The introductory clapping sequence by the awok-awok in the beginning of the whole performance is known as the tepuk sepuluh that translates as the ten claps, which could imply the thunderous clapping sounds many hands can make or the reference to the 10 fingers of one’s hands.

7. The music element is dependent on the different textures produced by the paluan ensemble. The term paluan within the context of Dikir Barat is the result of striking a drum which produces percussive sound and acts as the heartbeat of the team. Usually there is the Rebana Ibu (Mother) and the Rebana Anak (Child), which are similar hand-hit drums of two different sizes. They complement each other, providing interlocking sounds to add to the dynamism and textured percussive sounds. Other than the drums, there are also idiophone instruments in the ensemble such as the hanging gong, canang, maracas, and the tambourine.

8. The production of lyrics is another component of the form. Though it is common to use familiar folk songs as a basis of the singing, bringing across a message to the audience is an important part of why the form exists. It may be argued that the spontaneity of the tukang karut, who addresses the audience and interacts with them using witty and comical commentary, counters the need for lyric writing, however in competitions the lyric component is an important criterion for judging.

9. In competitions, there will be a dedicated judge to evaluate the lyrics and the extent of the kupasan (interpretation) of symbolism in the lyrics. Dikir Barat lyrics often use Malay pantun conventions, such as the four-line form that consists of the first two lines functioning as a figurative suggestion (pembayang) and the proceeding two lines which are direct statements revealing meaning (pemaksud). The lyrics produced usually incorporate commentary about recent events or social critique.

10. Voice is an integral part of the performance. The awok-awok are trained in pitch and projection as well as how to sing coherently so that their communal singing is clear and can be heard. The tok juara plays the important role of initiating the performance, singing in unmetered rhythm and a slow tempo with an ornamented melodic line. The texture of their singing should allow for audiences and the awok-awok to be contemplative of the lyrics. The tok juara is responsible for setting the opening theme and initial mood of the performance.

11. The tukang karut is the second soloist and as the leading voice for the main part of the performance, they have the luxury of moving around and about. It is the tukang karut’s personable interactivity that gives them the license to invoke humour or reactions from the audiences. The tukang karut is usually prized for their spontaneity, hence creating witty, clever and quick pantuns relating to the initial theme of the tok juara is expected. The tukang karut will introduce a catching couplet that the awok-awok will repeat. This will create an interweaving of vocals.

12. Costumes play an important part of Dikir Barat presentations today. More elaborate designs and striking colours have become common in the scene. Men usually wear the traditional baju Melayu with the external cloth known as the samping and depending on the identity of the group, the headgear could either be tanjak (traditional headgear worn by traditional elite figures or sultans) or ikat kepala (cloth wrapped around the head).

13. Women practitioners usually wear traditional garments such as kebaya tops or feminised versions of the male baju Melayu, because they are expected to sit in the Srikandi position – a sitting posture of female warriors wherein the right leg is crossed over the left leg, with hands rested over the protruding right leg.

By the 1990s, Dikir Barat had become so popular that groups even began recording their songs. The album Dikir Nusantara released by two top Dikir Barat groups was so successful that it sold out within a month of its release.

Dikir Barat songs with the theme of Hari Raya continue to be aired on Malay radio stations today.

15. Today, the Dikir Barat community has a strong presence online. An online platform founded in 2016, called serumpundk.sg is one example of how accessible the artform has become. For example, its organisers reach out to youths through Piala Suara Serumpun, an annual Dikir Barat competition for local tertiary students.

10 Things is part of a series by ArtsEquator supported by the National Arts Council. To read other parts in the series, click here.

Muhd Noramin Bin Mohd Farid (Soultari) is a choreographer, arts educator and researcher from Singapore. He is currently a PhD candidate in Theatre, Drama and Dance studies at the prestigious Royal Holloway, University of London, UK. He is a recipient of the ASEAN-India Youth Award (2018), Singapore Youth Award (2017), National Arts Council Scholarship (2017) and Goh Chok Tong Mendaki Youth Promise Award (2016). Amin is the Joint-Artistic Director of Bhumi Collective, a multidisciplinary performing art and producing company. He writes occasionally for Arts Equator, Straits Times and the Esplanade Theatres by the Bay.