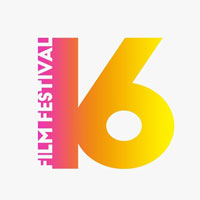 This week, you can catch many films under the 16 Film Festival at various cities in Indonesia. 16 Film Festival is a film festival that is created in line with UN Women’s 16 days of activism and campaign against gender-based violence. As such, the festival shows film that would increase society’s awareness on gender-based violence. Between 25 November and 10 December, 16 Film Festival screens films and hold various performances, exhibition, fringe events at 16 cities in Indonesia. To get the festival’s schedule and to learn more about it, follow the festival’s Instagram account here or check their Facebook page here. 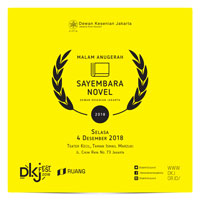 On Tuesday, the Jakarta Arts Council is holding a discussion and the award night for its novel competition. From 3 to 5 pm at Teater Kecil lobby at Taman Ismail Marzuki, there will be a discussion on how to fight against hoax with literature and humor. From 7:30 to 9 PM, at the Teater Kecil, the council will be announcing winners of the award as selected by panelist A.S Laksana, Nukila Amal, and Martin Suryajaya. The event is free for all members of the public with registration. For more information and to get the link to register, click here. 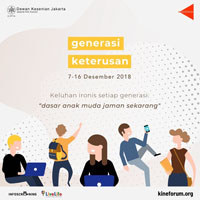 To close the year, Kineforum will be holding a week of film under the theme “generasi keterusan” or the generation that over step the boundary. The theme refers to the tension between the older generations in any period of time that likes to complain about the behaviour of the younger generations that never meets their expectation. The series of films tha will be screened under “generasi keterusan” will remind everyone of the importance of the transitions between generations. Especially how the younger generation can step over their boundary by ignoring and rebelling the older generation while the older generation can over step their boundary by holding on too much to their control over the young. “Generasi Keterusan” will take place at Kineforum in Jakarta from 7 to 16 December 2018. For more information on the films, follow Kineforum on ther Instagram account here. 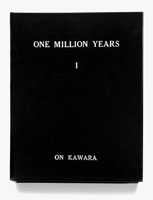