Filled to the brim at 25% capacity, Singapore Repertory Theatre’s Robertson Quay theatre was cold. The starched whiteness of Petrina Dawn Tan’s set — comprising piles of books that would function effectively as furniture, storage space, and the psychological landscapes of the play’s two characters — added to this austere atmosphere. I didn’t know what to expect. A friend and I had come to watch The Sound Inside, the company’s first production of 2021 and a return to live theatre for many since the pandemic hit. SRT’s staging of Adam Rapp’s 2019 Broadway debut, directed by Cherilyn Woo, was intended as a response to the state of isolation and fragility the world at large has found itself in, one which invites audiences to reflect upon the meaningful connections in their lives.

Our protagonist, Bella Baird (Serene Chen) is a creative writing professor at Yale University who values the company of books more than people. Following a freshman writing class Bella teaches one autumn, we see her develop an unlikely connection with her student Christopher John (Krish Natarajan), who she suspects, under the pretext of discussing his upcoming novel, just wants to “hang out”. There is something disarming about Christopher — his hatred for email, his unnerving taste for the morbid, and his love for literature which runs as deep as Bella’s own. The script moves in the expected direction, with the two characters gently breaking each other’s barriers, until Bella receives grave news about her health. Once The Sound Inside delivers this first shock, it does not hold back its punches, calling into question the basis of Bella and Christopher’s relationship and pushing the boundaries of what two people can ask from each other.

The production is economical in every way: being carried by two actors, and unfolding within Tan’s efficient set, in which Bella’s cherished books are also the chairs that she and Christopher sit on, and their three drinking cups get transformed impactfully into literal poisoned chalices. While aspects of the script rooted in American culture may be lost on audiences, such as the reference to various University sport teams, the combination of the naturalistic sound design (Daniel Wong) and costumes (Tan Jia Hui) — Bella’s periodic changing of coats, Christopher’s reliable canvas jacket — help ease us into the story’s distant autumnal climate. Serene Chen’s Bella is charismatic, candid, and ostensibly self-assured as she leads us into her life, which is why her character’s emotional arc, in the face of mortality and loss, is touching to behold. Krish Natarajan’s slightly brash and closed-off Christopher counterbalances Chen’s energy; as the play progresses, he lets us into the character’s passionate side, exposing with it an unexpected, almost childlike vulnerability. Transforming with their characters, the two actors possess good chemistry from start to finish. We feel that the solace they find in each other is a resolution of sorts, only to find that it is more of a brief but intense meeting point in their separate paths.

At the play’s conclusion, we are tempted, like Bella, to look for clues that would foretell the ending. Rapp’s script devotes many words to the plots of Bella and Christopher’s individual novels – an opportunity for physical embodiment that the production did not fully seize upon. This unique intertextual aspect entangled characters and audiences alike in the tension between fiction and autobiography: should we have seen this coming, should Bella? Who is Christopher really, and what had he done? The significance of writing is also scattered everywhere in the production, culminating in a moving moment towards the end of the play when Bella weeps over Christopher’s manuscript and sheaves of paper fall from the inconspicuous light fixture. This inspired choice reminds us of the kinship between paper and snow: both are pristine and receptive, potential tabula rasa — but only one can remain solid in another’s hand.

This leads us to the obvious question: what is ‘the sound inside’? When Bella initiates an automatic writing exercise with her class, “listen to the sound inside” are the only words she manages to scrawl out. The title bears an ambiguous and subtle relation to the narrative, one which the production could have drawn out with more creativity and conviction. The sound that tells Bella what must be done turns out to be wrong; Christopher fails her but this failure is a mercy, a rare and surprising grace. Sensitive and urgent, SRT’s The Sound Inside is a bittersweet welcome to theatregoers that fulfils its mission to remind us to cherish rare moments of connection and open ourselves to the equal possibilities of suffering and hope that come our way.

The Sound Inside runs from 10 March to 16 April 2021 at Singapore Repertory Theatre. Note: The show contains references to terminal illness and suicide ideation. 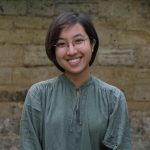 Originally from Singapore, I am currently based in Oxford, where I am doing a Masters degree in Musicology. I am interested in performance and cultural studies, particularly in topics such as posthumanism in music, music-dance relationships, and practices at the intersection of postcolonial, gender and queer studies. In practical terms, I enjoy writing academically and creatively, composing music-based pieces, dancing Odissi and figuring out my favourite songs on keyboards and the guitar.