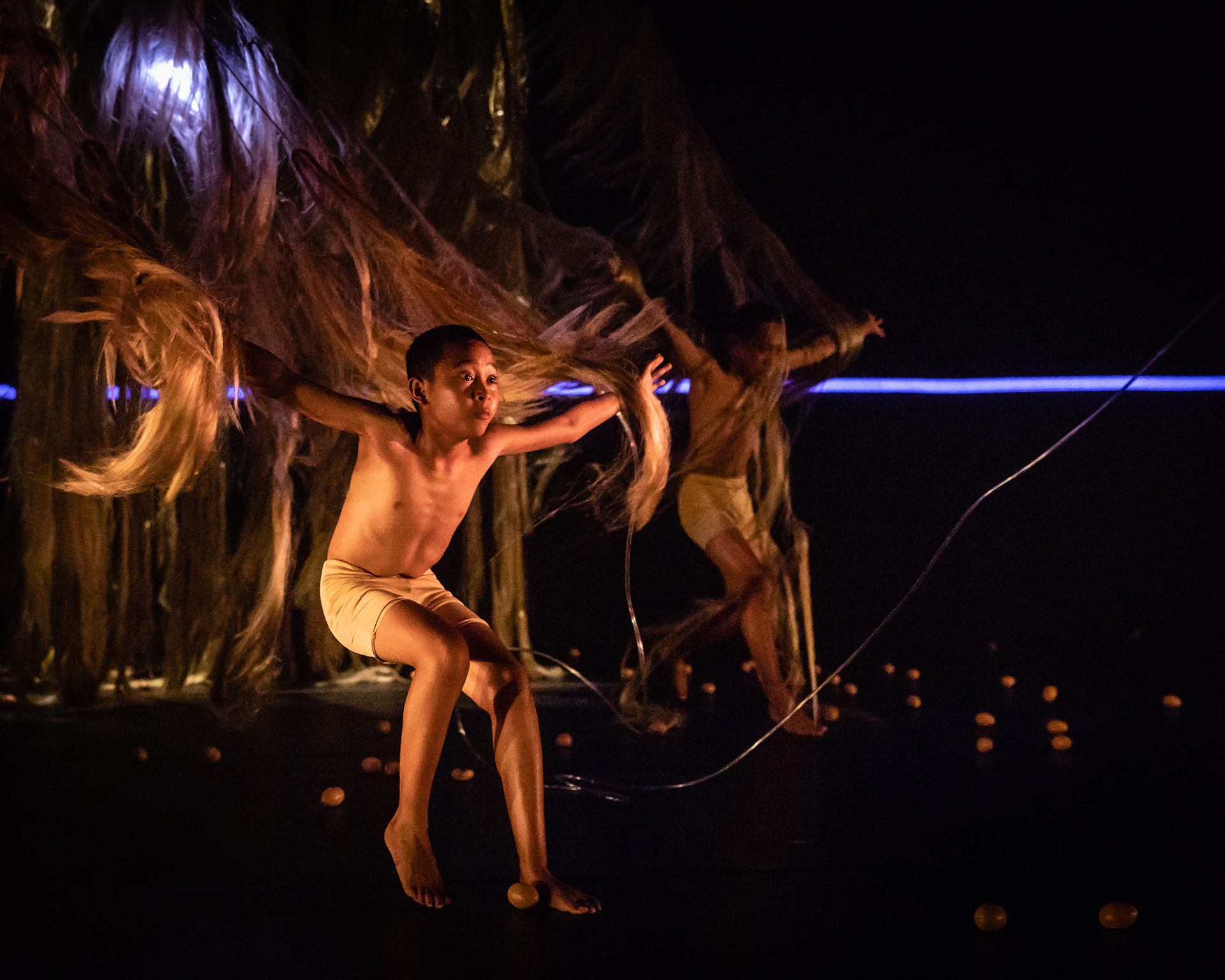 “Embracing life means embracing every element of dualism in it. Embracing the good and the bad, the happy and the sad, life and death,” writes Kamila Andini, director of the spiritual dance-theatre, The Seen and Unseen, in its programme notes. This philosophy,  known as ‘Sekala Niskala’, resides deep in Balinese culture.

The Seen and Unseen is based on Andini’s 2017 movie of the same name. In Melbourne at Asia TOPA until 29 February 2020, this stage version successfully brings the quintessential elements of Bali to life through a synthesis of traditional Balinese dance and contemporary theatre. It was previously presented in 2019 in Jakarta at Komunitas Salihara and in Singapore at The Esplanade’s Pesta Raya – Malay Festival of Arts.

For many, thoughts of Bali conjure visions of padi fields, idyllic sunsets and animals. Amidst the haze of burning kemenyan or incense, one just about makes out the graceful, sometimes strident, and ethereal gestures of Balinese dance. Bali is a mélange of smouldering beauty, beach parties and seances, cocktails and jamu. ‘Sekala niskala’ provided Andini with a vehicle to reel us into the Balinese psyche in order to explore the question of identity, “how we have such a deep connection with everything we believe in; how our beliefs are often irrational but that’s who we are”.

The philosophy of dualism dominates her narrative; from her protagonists – a pair of twins, Tantri and her brother, Tantra, who falls seriously ill – to Tantri’s subsequent struggle in dealing with her beloved twin’s inevitable death.

The premise of the stage production mirrors that of the movie, as does its inspiration. Children steeped in the art of traditional Balinese dance are a key feature of both the film and its dance-theatre adaptation. These are children schooled at Komunitas Bumi Bajra, an arts academy of sorts that focuses on vocal, theatre, dance and percussion training.

As remarkable, or perhaps more so, than the athletics on display was the depth with which the young performers played their parts. This is not to trivialise the emotions that a young person might experience, but the Bumi Bajra performers exhibited a maturity and empathy that often escapes the average teenager. There was a pronounced use of animal-like and visceral vocalisations – hissing and growling and shrieking – and I wonder if those exercises reminded the children to dig into their deepest selves for direction.

Post-show, I had the good luck of chatting briefly with Ida Ayu Wayan Prihandari, an adult Bumi Bajra performer who played the role of the Moon Goddess – clearly a role made for her because she danced it so beautifully. I mentioned my surprise at the children’s profundity and the Moon Goddess replied, “During rehearsals, they were encouraged to improvise and interpret the story and we workshopped their interpretations with them.”

In a short making-of film made by Takun Arrosid, choreographer and Moon Goddess’ older sister, Dayu Ani, points out that the conversations that the children had with one another – “they used to chat about kid things” – changed over the course of the production. Andini also makes reference to how it was an emotional journey for everyone, “All of us have cried in this process and every tear has its own story.”

Having witnessed the almost-contemplative focus of the production in its entirety, one can only imagine how heavy those tears might have been.

Carolyn Oei is an educator, writer and community builder. She’s currently a lecturer at the Nanyang Academy of Fine Arts where she teaches law and policy in the School of Arts Management, Dance and Theatre. Her community work is focused on heritage and the environment. Her writing can be accessed via www.mackerel.life.