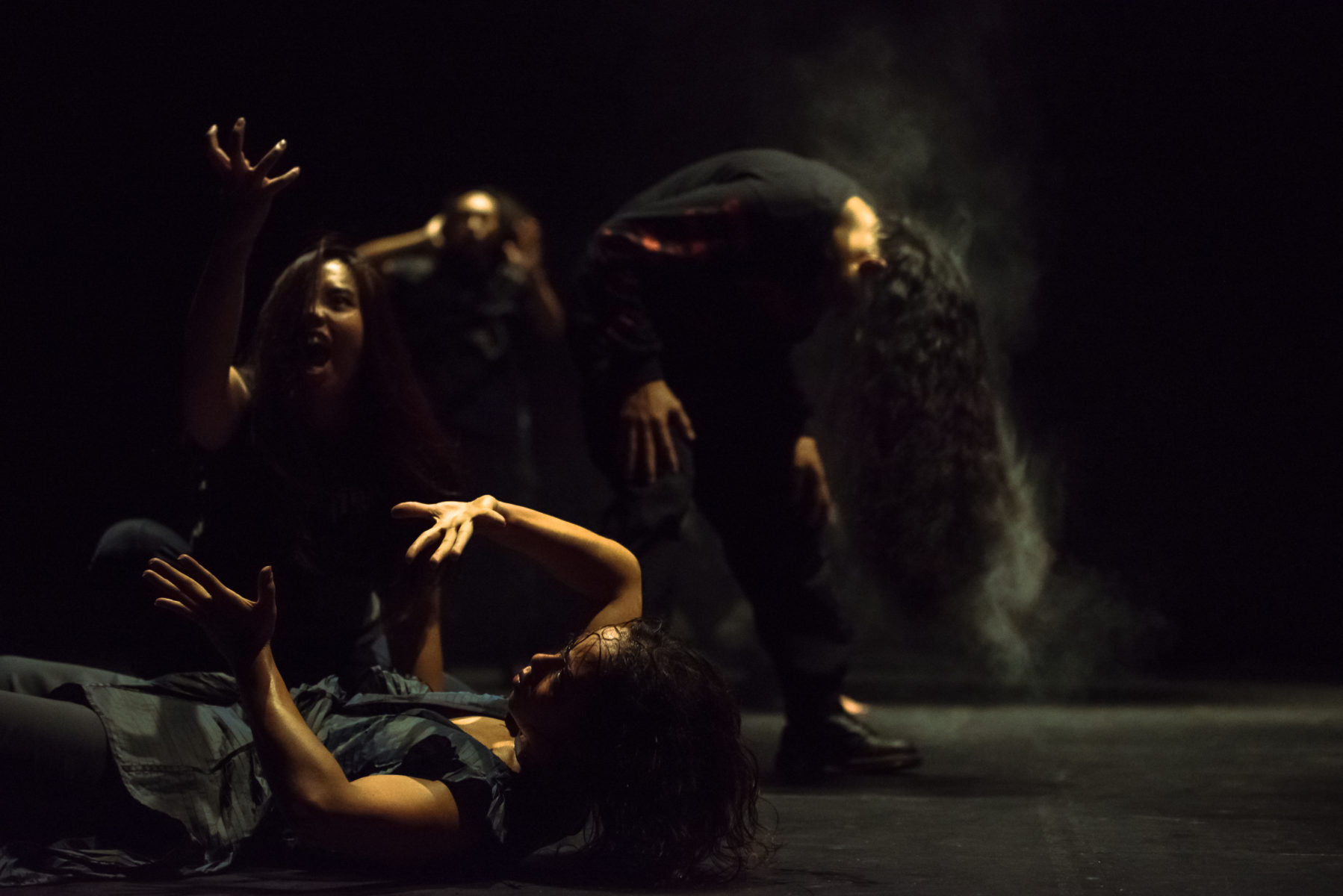 I am not a fan of heavy metal music – or heavy metal anything – so I took my seat in the Playhouse, Arts Centre Melbourne, with trepidation. I was there for the world premiere of Metal, an unlikely collaboration between Melbourne-based contemporary dance company, Lucy Guerin Inc, and Bandung-based heavy metal choir, Ensemble Tikoro, who were performing outside of Indonesia for the first time.

Heavy metal choir… who knew there was such a thing.

I can probably safely assume that, like me, many of us in the audience went in expecting to see metalheads on one end of the stage banging away on their instruments and screeching into their microphones while dancers bounced about to the resultant noise on the other side. But, the following 60 minutes proved to be quite the opposite.

The performance starts with dancer Amber McCartney in a mesmerising solo – no musical accompaniment, a single spotlight on her. Her head is smoking, like a chimney.

This opening scene is one of Metal’s two quiet moments.

As the smoke dissipates from McCartney’s head, she is joined by an eight-person choir – no instruments; just the metalheads in their requisite black tees, black jeans and hair – and another four dancers.

The quiet quickly fizzles into the features of Ensemble Tikoro’s signature sounds – throat singing that brings to life wind howling in the trees, mountains crumbling, giants roaring amidst sounds of the gangsa, a metallaphone gamelan instrument, along with other extreme, hardcore and super-extended metal vocal techniques.

What ensues is a constant state of exchange between the dancers and the choir; a series of high-energy tableaux sequences comprising tag team-like interactions between choir and dancers.

Singers vocalise into their headsets and dancers respond. Change.

Dancers glissé and ball-change five steps across the stage, singers yawp from the depths of their beings. Change.

Dancers and singers use every inch of the bare stage, one group melding into the other like in a mosh pit; body surfing, weaving, jostling. Dance movements start out soft and graceful and almost submissive. They become more strident, confident and resistant as the guttural throat-singing seems to interrogate their very existence. Singers start to move like dancers and dancers find their voices, screaming their dislike for oppression.

The audience has nowhere else to look but directly at the moving, heaving, whooping figures onstage. And as we look at the performers head-on, we witness transformations that seem so sleight-of-hand. Yawn and you miss it. Stare too much at one performer and you lose the plot. Costume and make-up changes, dips and peaks in energy levels, destruction and a rebirth cradled in the haunting Sinden lilts of Mita Siti Kulsum – the only female in the choir.

Metal ends as it begins – in silence, in stillness; a large black hole.

The Sinden technique is broadly described as the female vocals in a gamelan performance, but its heritage is centuries old and the role and status of the pasinden, the singer, have evolved from questionable to important. This added layers to Metal’s closing song, the comparatively comforting tune, ‘Rajah’, which “typically describes a beginning,” explained Robi Rusdiana, founder of Ensemble Tikoro and co-creator of Metal. The preceding 50 or so minutes of the performance was conflict and tension between singers and dancers who somehow found their way to a negotiated harmony. “The song is about a universal and everlasting forgiveness, so it was appropriate to end the performance with the promise of a continuing relationship,” said Robi who was speaking at a public dialogue session organised by Asia TOPA at MPavilion.

The narrative of Metal is left open to interpretation. Some people might see the climate change crisis being played out. Others might imagine themselves watching an abridged version of all 10 seasons of The Walking Dead. Still others might feel a championing of the oppressed.

Whatever the narrative, the scenario that unfolded was one of a multi-disciplinary success story. The performers typified a collaborative exercise that is, and ought to be, subsuming.

Energies were rubbing off one another so much so that one could actually see the zing of understanding. With Guerin’s choreography allowing room for the performers to improvise, the dancing seemed to be less focused on technique than instinct. This, of course, means that each performance will differ from the next, even if only in a small way. This also means that every performer will inject more, or less, of their process of collaboration into their role, which can only spell excitement and anticipation of any future iteration of Metal.

Carolyn Oei is an educator, writer and community builder. She’s currently a lecturer at the Nanyang Academy of Fine Arts where she teaches law and policy in the School of Arts Management, Dance and Theatre. Her community work is focused on heritage and the environment. Her writing can be accessed via www.mackerel.life.