NB: It is important to differentiate between the two versions of Shirkers that were filmed. In this article, Shirkers refers to the 2018 documentary film that I am reviewing, whereas Shirkers 1.0 refers to the road movie that was originally shot in 1992.

“Memory is the sense of loss,
and loss pulls us after it.”
– Ruth, in Housekeeping (1980) by Marilynne Robinson

In a 2012 interview with the Los Angeles Times about her debut novel The Black Isle, Sandi Tan talked about her interest in “ghosts of various kinds” – not just the ghosts that are literally featured in the novel, but also the metaphorical ghosts of “regrets, things left undone, people left behind [and] the past”. At first glance, this seems like a generic reason that any artist would conveniently cite for creating their work. It is only after watching Shirkers, however, that I truly begin to appreciate the complicated extent of Tan’s personal investment in these metaphorical ghosts.

The year is 1992. With a shoestring budget, a resourceful DIY spirit and the generosity of family, friends and acquaintances, Sandi Tan – together with her friends Jasmine Ng and Sophia Siddique Harvey – shoot Shirkers 1.0. Whilst basking in the relief and euphoria of completing what seemed like a logistically insurmountable shoot, their world crumbles like quicksand: the enigmatic Georges Cardona – the trio’s filmmaking mentor and also the director of the road movie Shirkers 1.0 – absconds with all 70 reels of the footage of the road movie. And as if having their dreams abducted wasn’t bewildering enough, a second twist of events surfaces years after the trio give up all hope of recovering the stolen footage: after Cardona’s passing in 2007, his ex-wife contacts Tan and asks the latter if she was interested in reclaiming the aforementioned 70 reels of footage, which Cardona had mysteriously preserved in almost pristine condition.

The collaborators whom Tan interviewed for Shirkers claimed that Shirkers 1.0 would have trail-blazed the Singapore film scene in the 1990s, and it is not hard to agree with them. Judging from the excerpts that made it into Shirkers, I imagine that the humorously whimsical premise of the Shirkers 1.0 – a road movie about the adventures of a 16-year-old serial killer named ‘S’ – would have been refreshing to watch back in that time. Moreover, the mise-en-scene of Shirkers 1.0 is a delight for both the eyes and the mind, with its pastel-coloured time capsule of now-demolished Singapore landmarks that my 25-year-old self does not recognise. Had Cardona not discarded the sound recordings that were supposed to accompany the 70 reels of footage, any impulse to release Shirkers 1.0 in all its glory would certainly have been a tempting (and more than understandable!) endeavour to do justice to the blood, sweat and tears that went into this road movie. Instead, Tan – after consulting Ng and Harvey – decided to create a documentary film that reflexively unravels how the making of Shirkers 1.0 went awry. The end result? A 90 minute collage of memories where Tan – interspersing excerpts from Shirkers 1.0, artefacts that documented the pre-production and production processes, and interviews with people who knew Cardona – attempts to make sense of what happened back in 1992, and why it happened. 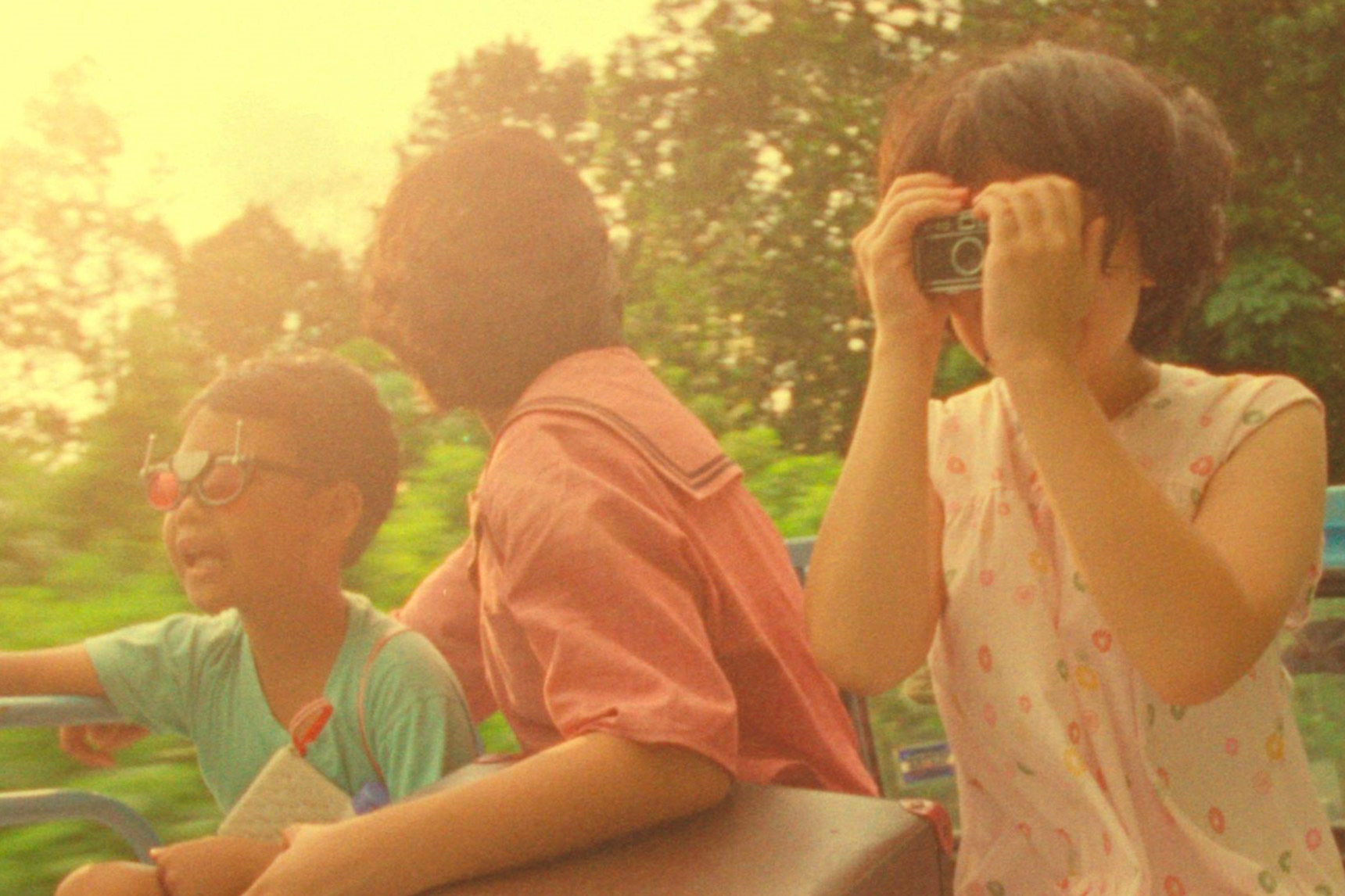 Given that Cardona was the key antagonist in the entire saga, Tan – in Shirkers – inevitably conducts what is effectively a posthumous psychoanalysis of the his character through interviewing fellow victims of Cardona’s duplicity, both within and beyond the context of Shirkers. Watching the outcome of Tan’s investigations, however, it becomes clear that nobody – not even those closest to Cardona – truly understood him. Tan’s interviews expose several bizarre contradictions over what victims knew about Cardona’s life – ranging from lying about being the inspiration for the protagonist in Steven Soderbergh’s Sex, Lies and Videotape (1989), to how he falsified his date of birth so that he could belong to a different horoscope. The only thing that is truly being corroborated is the meta-realisation that Cardona’s entire life is a lie. At the end of it all, Tan accepts that she can never exorcise Cardona’s ghost from her memory – a realisation that the constant appearance of variations of Cardona’s smirking face onscreen alludes to. A smirk that betrays the pleasure that he gets whenever he unrepentantly takes someone on a ride – how dare he?

Cardona’s web of lies, however, is not the only thing that contains traces of duplicity. Even within the trio of Tan, Ng and Harvey, there are incongruences in their accounts of what really happened back in 1992. The tension is palpable between Tan and Ng, which culminates in the latter accusing the former of being an ‘asshole’ for insisting winging their way through the production of Shirkers 1.0, even though Ng and Harvey had repeatedly warned Tan – through their progress reports – about the lack of funds and Cardona’s failure to follow through with logistical promises – all of which turned out as they had cautioned. While Harvey eventually talks about how this harrowing experience has permanently created a visceral and emotional bond within the trio, Ng’s passionate outburst against Tan suggests that Shirkers 1.0 has irreversibly strained their friendship. At this juncture, I begin to question if any of the trio – especially Tan, as the narrator of Shirkers – are being entirely objective and/or truthful about their culpability in not preventing Cardona from absconding with the 70 reels of footage.

But perhaps an objective re-telling of the making of Shirkers 1.0 is beside the point of this documentary film. In accommodating a myriad of conflicting accounts from Tan’s past collaborators, Shirkers not only acknowledges the universal inevitability of duplicity, but also celebrates the subjectivity of memories. Tan reclaims the dreams that were stolen from the trio 26 years ago not by wielding the investigative prowess of Sherlock Holmes, but by coming to terms with whatever nebulous memories she is able to retrieve. It is the struggle to make sense of these nebulous memories that I find compelling to watch, because it reveals Tan’s love-hate relationship with the ordeal that she went through. As I watch Tan agonise about running out of production funds with two weeks left to complete the shoot, I also feel the immense affection that she has towards Mega the giant wolfhound, Freda, Kaylene, Pohshon and the countless people who unconditionally joined the trio in winging their way into filming Shirkers 1.0. As I spot Cardona’s name in closing credits, my blood boils at the acknowledgement of his contributions to Shirkers 1.0, only for it to simmer afterwards as I recall how 18-year-old Tan once regarded Cardona her best friend (in a not-so-recent interview with Prestige, Tan actually pays homage to the influence that Cardona had in shaping her worldview).

Do I recommend watching Shirkers? Of course! For the record, I have threatened to sever ties with Netflix-subscribing friends who refuse to watch the film. I am pleased to share that as of the publication of this article, all of the aforementioned friendships are still intact. But would I clamour to watch Shirkers 1.0 if it ever gets released in its entirety? Probably not. For one, Shirkers – in its reflexive attempts to wade through grey areas – pays better tribute to how groundbreaking Shirkers 1.0 would have been in 1990s. But more pertinently, Shirkers has made me see value in the inaccuracy of remembering – and by extension – the liberating possibilities of not being obsessed with conclusively defining the past.

This article was edited on 21 December 2018 to make more accurate the context of the progress reports mentioned in the fifth paragraph.

Shirkers is available on Netflix.

Guest Contributor Ke Weiliang (also known by his initials kewl, pronounced ‘k-yul’) is entering his final semester at the Bachelor of Arts (Honours) Arts Management programme at LASALLE College of the Arts. He is irrevocably enthralled by grey areas and self-reflexive behaviour, for he believes in their potential to cultivate empathy through making one more sensitive to nuance.

kewl believes that sharing is not just caring, but empowering. He is the administrator of Channel NewsTheatre, a one-way Telegram channel that delivers periodical updates on upcoming performances and working opportunities in the Singapore theatre scene.

Ke Weiliang (he/they) is curious about how living beings hold space for each other through asynchronous and/or physically distanced interactions. By day, he works remotely in customer support for a fintech company. By night, they run the Telegram community Channel NewsTheatre and occasionally write about the arts on Gee Dock Convos and ArtsEquator.