“Have you eaten?” is the go-to greeting for Singaporean Chinese families. Typically asked in dialect (“Jiak ba buay?”), or sometimes Mandarin (“Chi bao ma?”), “Have you eaten?” is a sign of courtesy towards your parents or grandparents, a simple question that bolsters familial bonds. W!ld Rice’s Grandmother Tongue (returning after a successful run at last year’s Singapore Theatre Festival) relishes the casual intimacy of such everyday family moments, and brims with understated charm and heartfelt warmth.

The play tells the story of a young man, Boon, attempting to connect with his Teochew-speaking grandmother. Mandarin may be taught in schools as a “mother tongue”, but the dialects our elders speak are often forgotten. Grandmother Tongue addresses this head-on, intertwining three languages in dialogue and surtitles. When Boon’s grandmother claims to be Teochew, the officious English surtitles correct her, stating she is an uneducated Singaporean Chinese woman of Teochew descent. It’s a clever take on identity and language, and Grandmother Tongue proceeds to construct from an array of such tiny clashes an argument for the uniqueness of the cultures and dialects that modern Singapore prefers to subsume under the term “Chinese”. 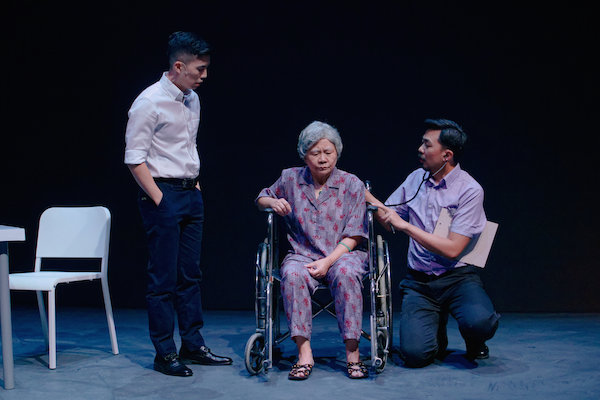 Boon buys his grandmother Western biscuits or “angmoh bing”. When praying at their Buddhist altar at home, Boon does not know how many joss sticks to use. Boon’s grandmother insists that expiration dates on food are a conspiracy perpetrated by greedy corporations. Grandmother Tongue does not offer a strong narrative, but creates vivid imprints of a relationship between a man and his grandmother. This does not render the play ineffective, and instead recalls how our memories consist only of disparate fragments, but have the power to stay with us forever.

With her furrowed brow and shuffling gait, Jalyn Han’s remarkable portrayal encompasses a stubborn woman standing her ground against authority and a grieving mother learning far too late of her son’s divorce. Han’s performance evokes sympathy from the audience, and her frailty and discontent are heartbreaking. Tan Shou Chen as the chirpy Boon is deeply likeable, providing an affable face to his grandmother’s increasing discomfort with her life. The last member of the trio, Rei Poh, plays every minor character on stage. Armed with a cane and a wagging finger, he plays a strict Chinese teacher who prides in enforcing school discipline policy in Boon’s junior college. As a “Speak Good Mandarin” host who does not quite speak good Mandarin, he provides some comic relief. Rei skillfully fleshes out each of his characters, adding flavour to the tight dynamics between Han’s and Tan’s characters.

Grandmother Tongue is ultimately a play about language. Language tells the truth about our identity; it lets others glimpse through a keyhole into our culture; and sometimes it betrays us, exposing how we are disconnected from our roots. And the cast inhabits Lim’s tender, dreamy landscapes to produce a moving, intimate play filled with fragmented moments and comforting, sad truths.

Starring Tan Shou Chen, Jalyn Han and Rei Poh, Grandmother Tongue by W!ld Rice was written and directed by Thomas Lim. It enjoyed full houses for all shows in its run from 28 September to 21 October 2017 at the SOTA Studio Theatre. All performances were sold out before opening night. This review is based on the performance on 30 September 2017 at 8pm.

Patricia Tobin is an arts writer from Singapore. She currently works in media. She tweets at @havesomepatty.