The concluding production of TPAM 2019 was Constellation of Violence, a lecture-performance by artist Irwan Ahmett, which focused on the culmination of the Cold War in Indonesia in 1965, from its lead-up to its aftermath. Irwan is an artist who positions his existence in the complexity of humanity issues through spatiality of histories and permanent impact of colonialism, and reflects those in the global geopolitical context.

Following from our review of the show, we spoke with Irwan on the performance, his relationship with history and how to deal with horror. Irwan also speaks about Name Laundering, which will be presented this week at Five Arts Centre in Kuala Lumpur.

ArtsEquator: Congratulations! Last night was the world premiere for Constellation of Violence, how are you feeling?

Irwan Ahmett: Firstly, I would like to sleep [laughs]. But, I would also like to show my appreciation to all people who support this production. It looks like a simple production, but it’s so complex. So, now it’s time to give back to the people who’ve helped me.

AE: What do you mean by a “simple” production?

IA: I was discussing with Tomoyuki [Arai, TPAM Program Officer] on how the act of presentation is very democratised, it’s simple. Like Keynote, everybody does it! Throughout the whole performance, I only made one move or sequence. So, so simple. Anybody can do it. But the meaning or the context, it becomes different and more complex, because I use these tools and I think about how I can use these tools differently. People use Keynote to sell products or to educate people, but in my case, it’s something else.

AE: In your own words, how would you describe Constellation of Violence?

IA: It is my personal investigation on atrocity and violence, and [to explore] my relationship with history. In this complex situation right now, personal narration was important because we are faced with the huge framework of narration all the time – from advertising to journalism. And then sometimes, there is space for personal narration, but a decrease in meaning. Like with social media, there’s just too many people speaking out and no one pays any attention because there’s too much going on. And you eventually lose meaning along the way. 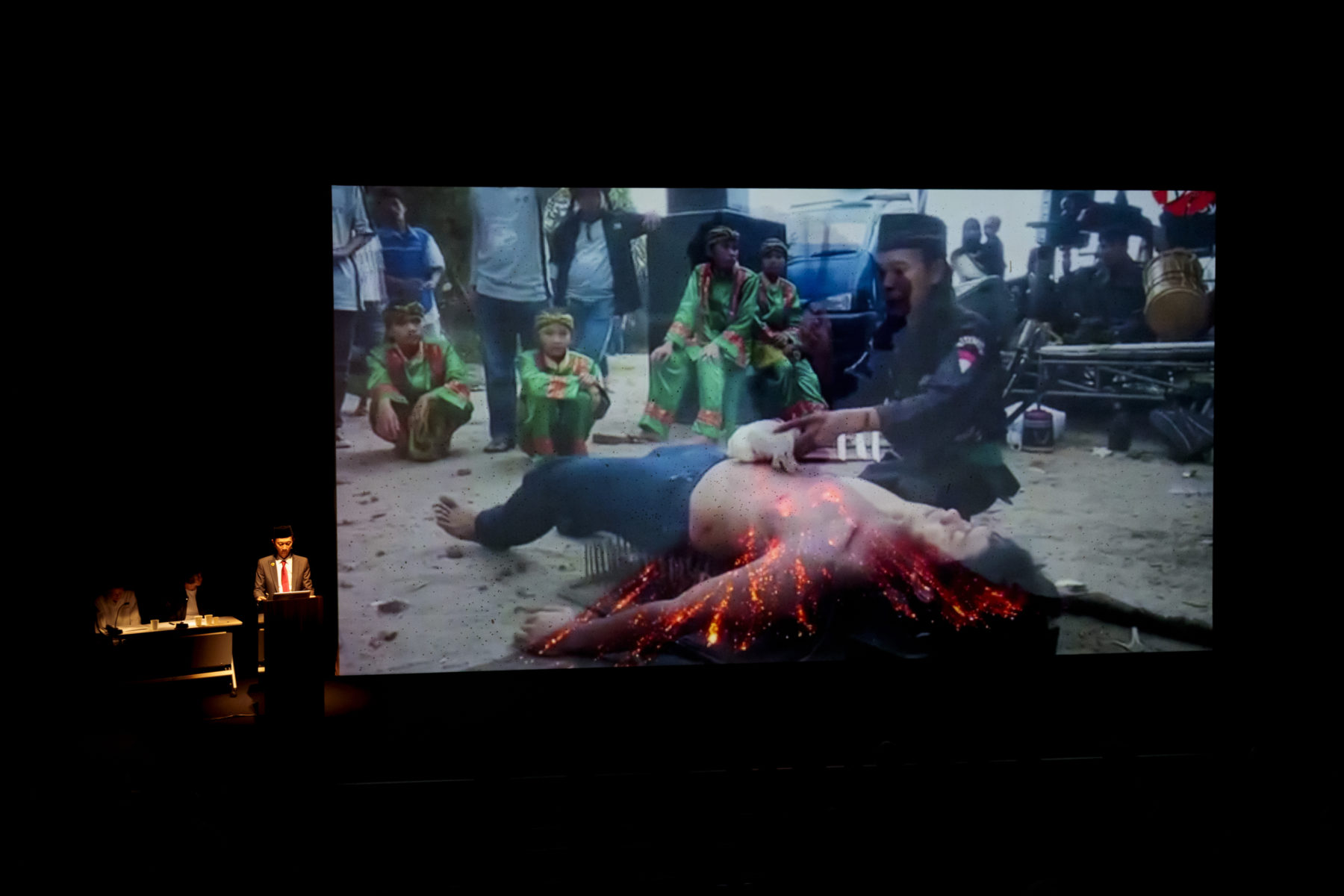 AE: As an artist, what is your relationship with history? Do you feel like you were able to give some meaning to history?

IA: To me, history has a default. So when you buy something, like when you buy an iPhone, you’re already getting this iOS system, as a default, as a given. Same with history, we’re given the default story, and I’ve decided to hack this, and experiment with it.

[Constellation of Violence] is more of a personal experience for me, and I would like to share what I know. Theatre is one of the best mediums to deliver my experience. And even more so with TPAM. Of course, for me, it’s impossible to perform this in a big space or with big support in Indonesia. It was so great for TPAM to let me present my piece without any problems and share another narration about communism in Southeast Asia [alongside other TPAM performances A Notional History and The Mysterious Lai Teck].

AE: What has been the general feedback of Constellation of Violence for you?

IA: I think most of our friends liked it, they enjoyed it because they know my work very well. Some of them saw our [Irwan and Tita Salina’s] previous project, so maybe they came with certain expectations. That’s also good for me, that they want to catch what I would like to express. But it was a gamble for me to perform for a completely new audience. I mean, we don’t know each other. It is thrilling, and of course they come to me and speak personally about what I expressed during the performance. Some friends were moved by the involvement of [the Japanese historian] too.

AE: Do you think it would be possible to stage Constellation of Violence in Indonesia?

IA: Maybe hidden (laughs), or secretly, not in a large public theatre.

AE: What about in other countries?

IA: I think we share the same suffering, especially in Southeast Asia. [Countries] that have been colonised or still practicing colonisation, and this subject is still relevant to us. We are geographically connected.

AE: But would you want to stage this production in a future Indonesia where you can talk about this publicly?

IA: Well, if Indonesia wants to be a better place, we have to fix our history. If not, we just create more suffering. But I strongly believe we can do it because, especially in Indonesia, we have an incredibly dark sense of humour, which I use [in Constellation of Violence]. There’s something dark, but you can also laugh. It goes side by side – the horror and the humour. So humour could be a medium or another kind of expression to cope with the darkness. For countries with a long period of oppression or dictatorship, we don’t know how to resolve these problems and laughing is a way to relief the pain. There is no way out, and with humour, you forget the problem even if it is just for a while. You know, we want to bring the Indonesian smile to the world. Then you can feel more comfortable living in an unsustainable world.

AE: Could you tell us about your previous works?

IA: This is my second time performing in Japan, but we had a few exhibitions in the past. My first time to perform in Japan was a month ago in Yamaguchi [Name Laundering]. It was about my personal oath, on why I am never entering Singapore again. I designed eight ways to enter Singapore illegally [laughs], because I have problems with immigration.

I think there is a problem behind the idea of countries. For example, in Southeast Asia, or Asia in general, if you’re talking about power, and who rules the country, it’s more to do with dynasties. Of course it’s rooted from the culture, but actually in reality, politically dynasties dominate. And what are our roles [in a dynasty-ruled country]? So for people outside of these dynasties, we the citizens, we have to accept all of these ideas of the nation. You can hardly question or express yourself. So in my position, I use my democratic right, not only as a citizen, but as a human, to be more aware about nationalist ideologies – a forced obedience to work harder and be more productive and become successful.

AE: Do you think this mentality applies specifically to Southeast Asia, or does this occur all around the world?

IA: Capitalism, globalisation and right-wing nationalism – these are the perfect three conditions to create the new definition of success. And this is quite stressful because there is almost no space for failure or mistakes. But we are humans and we have human errors.

Patricia Tobin is a theatre reviewer from Singapore. She writes at havesomepatty.com.