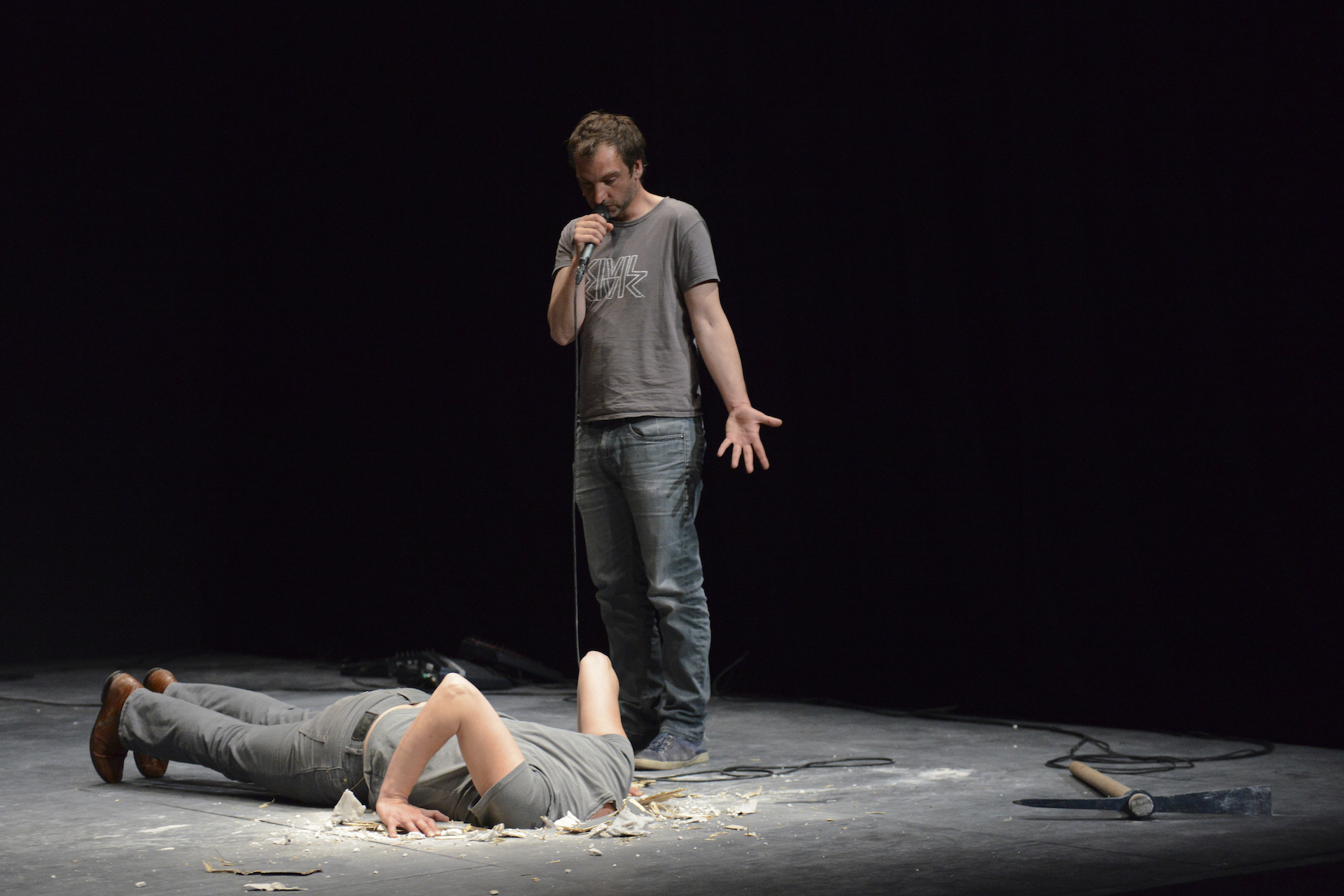 “Are you interested in the first series of major discoveries, such as the law of elementary mechanics?” a friendly voice asks over an intercom. “The wheel, perhaps?”

Halory’s three companions shake their heads and he promptly replies, “No.”

In classical physics, we deal with the observable world. In Germinal, four performers deal with their observable world – the confines of a stage. Their hypothesis is as follows: individuals in a closed universe can produce a series of events that meet a criteria of coherence.

The experiments begin. They test lighting faders. They play with projections of English surtitles on panels and use them to display their unspoken thoughts. At one point, Beatriz digs a hole in the stage floor with a pickaxe and discovers a microphone underneath. She is frank and assured in her mannerisms, waving the microphone as she silently gestures the other members to come over. Halory is the tallest, and is also the closest the group has to a leader. He prompts cheeky and inquisitive Denis to blow into the microphone. Jean-Baptiste, often solemn and irresolute, is intrigued by the sound this makes. He suggests modulating, and another member urges Denis to “squeeze your larynx”. Sensing new possibilities, the group encourages Denis to move his tongue and lips, and voila! they have discovered spoken language – what a breakthrough! But, having found a superior way to communicate, should they now abandon their surtitled thoughts? No, conveniently for their Anglophone audience, they decide to speak in French but continue to have English surtitles because they like the syntax.

Germinal alludes to serious scientific methods but never takes itself seriously. The group classifies the components of their world into two categories: things that go “poc poc” when hit with a microphone and things that do not go “poc poc”. The latter category quickly fills up with abstract concepts, and the four revel in feelings of karmic fusion, embarrassment and the joy of being together. The success of Germinal lies in such simple notions meshed with uninhibited creativity as these “four individuals with different goals” work together to haphazardly create a universe.

Another development occurs: Jean-Baptiste mysteriously finds a guitar in the hole and begins strumming some chords while the other three continue their discussion. Presently, though, the ever-perceptive Halory notices something is amiss. “Something strange is going on,” he says, straight-faced over the giggles of the audience, “For the past minute and half, we’ve been in singing mode.” They have discovered a new mode of communication!

Germinal meshes physics, space, time, plot, character and action to fashion an impressively well-structured play. Just as the real world relies on physical laws that enable its form and function, so Germinal concocts form and function from a hilariously arbitrary set of theatrical laws, and thereby produces a post-dramatic, non-narrative theatre that is powered by the fusion of science and art. The hypothesis has proven to be true. The demonstration is complete. The experiment is a success.

This review is of the performance on the 2nd Sep 2017. Germinal is created and directed by Halory Goerger and Antoine Defoort of French theatre collective L’amicale de production. It ran from 31 Aug – 2 Sep 2017 at the SOTA Drama Theatre as part of the Singapore International Festival of the Arts. More information here.

Patricia is an arts writer from Singapore. She currently works in media. She tweets at @havesomepatty.