Army exercises are typically perceived as tough, and even mind-numbing with their incessant drills. The monotony of army rounds can be found outside the battlefield too: our personal routines are akin to a civilian regime of sorts. Frago, the latest play by Checkpoint Theatre, directly tackles the contrast between the routines found in military practice and our everyday habits.

In Frago, a group of men enter their seventh year of reservist training. These enlistees reluctantly face their training, but a male camaraderie that is backed by years of friendship becomes quickly apparent. They openly share their fears, hopes and dreams, while playfully teasing, bragging and grumbling. A young father talks about moving into a new home, and an army mate brazenly asks, “How much is your flat?”. The familiar closeness amongst the enlistees extends to the higher-ranking specialists, chiefly united by their dissatisfaction with the army: a complaint about the standard army practice of “rush to wait, wait to rush” is met with nods all around. The stony-faced full-time officers, unsurprisingly, do not participate such banter, and give their orders sternly. While there is a clear chasm between the characters’ military life and personal life, there is also a certain mirroring among the two. Returning to the same camp every year, embarking on a new job, carrying out equipment checks, meeting a new girl – the cyclical ritual of reservist training runs in parallel with regular real-life routines. 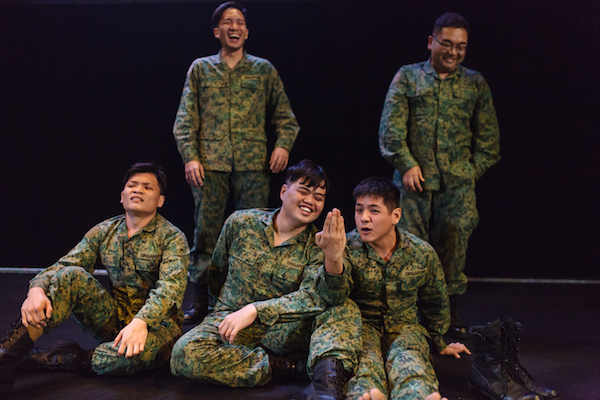 Strangely enough, such hyper-realistic scenarios are purposefully intertwined with highly stylised choreography. While two characters are deep in conversation, men in the background silently perform a slow-motion formation. A senior officer gives orders to a line of men while circling around his standing position. The act of digging trenches for a practice round becomes a beautifully synchronised routine. These moments are aesthetically pleasing, but the purpose of drawing attention to the characters’ physicality is unclear.

This does work, however, in a striking scene where the soldiers quietly carry out an arms procedure while a graceful female shopper performs a grocery exercise. The scene comes unexpectedly and its silence is jarring for a dialogue-driven play. The cast returns to the sidelines of the bare stage, a duo steps forward, the play continues. Frago does not pride itself in being subtle, and is unafraid to put across such a blatantly obvious idea. Its earnest nature in conveying the charade of army life and everyday life is rather alluring. 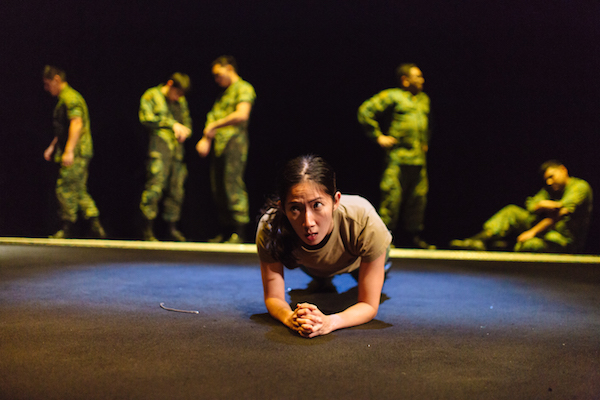 Clearly, as a twenty something woman, I am not Frago’s intended audience. Admittedly, being handed a two-page glossary of army terms before stepping into the theatre is daunting and I could be easily accused of “not getting it”. However, for a male-dominated play, Frago is accessible to all, as found with its female characters. The sole female civilian figure, played by Cerys Ong, initially acts as a bridge between the audience and the cast. Her first appearance in the play is, unexpectedly, as a member of the audience. Jo Tan plays the lone female officer who is fiercely hard working and determined. Unlike the enlistees, the military service has consumed her life, and she makes a difficult decision at the end of the play, which speaks volumes about privilege and education in the army. For a play about Singapore masculinity, it is ultimately, the women that shine.

Frago was written by Lucas Ho, directed by Huzir Sulaiman and presented by Checkpoint Theatre as part of the company’s 15th anniversary season. It ran from 13 to 23 July 2017 at the Drama Centre Black Box. This review is based on the performance on 15th July 2017, 8pm.

Patricia is an arts writer from Singapore. She currently works in media. She tweets at @havesomepatty.