“I reached for those insignificant destinies again; the smallest collision of time and incident that throws life out of orbit”
– “Stillborn”, Khin Chan Myae Maung

A new series by Ethos Books titled “orbit” has launched – a literary space station intended for works of writing that can hold their own despite not meeting the conventions of a full-length publication. The first three titles under this series appear pocket-sized in a bundle like a chapbook series, but this lightness belies the gravity and pull of the lives and stories observed between the covers. Shaped from personal experience, communal observations and inherited tales of suffering, these “insignificant destinies” within and across disparate worlds present themselves as three pathways into the lives of others. How might they throw me out of my usual orbit of reading the world? 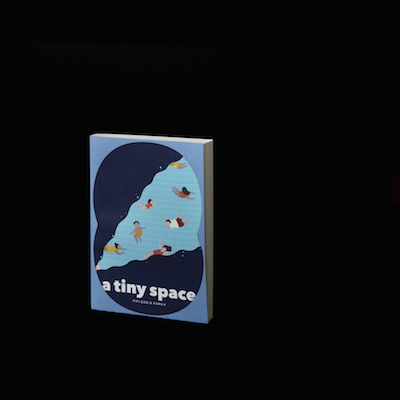 fifi coo & family’s “a tiny space” opens with a dialogue between fifi and his mother. At a playground, another little girl offered to play with fifi – a non-verbal child on the autism spectrum – and her mother praised her for it. But fifi rejects such acts of kindness borne out of pity, insisting that kindness should be practised regardless of (dis)ability. I welcomed fifi’s simple exhortation not to default to a kind of special sympathy just because of his condition, and I grew wary of the fine line between being empathetic and being condescending.

However, I admittedly found honouring fifi’s neuroatypical world on his own terms of expression to be challenging as a neurotypical reader. “a tiny space” intersperses fifi’s poetry with excerpts of conversations between fifi and mum, and reflective prose from the family members. We learn that his mother finally finds a way after many years to communicate with fifi via a simple alphabet board, and this translation process sparks off the hope for how

While fifi’s “creative arrangement” clearly calls for the erasure of hurtful casual prejudices towards the handicapped, it also occasionally lends to unusual word ordering, which gives his entries as much a sense of restraint as release, as if his overwhelming emotions are compressed by a limited interpreter. In his poem “9 December 2016”, fifi writes

“Now my only wish hides love enough,
soon ‘normal’ mind now mends.
Real mending looks no more, at new rough
hideous bad behaviours which now must end.
Wrong son now lives only to one idea,
of real normal living,
more loving and giving,
no one labelling me now as severe.”

fifi’s unusual language pushes the able reader to generously and hospitably inhabit his neuroatypical experience and his newfound and ongoing exercise of articulating himself in language, but it is particularly in his poetry where I find my responses more ambivalent.

fifi’s first poem sets the precedent for most of his poetry within “a tiny space”:

“None but eternal patience
can follow my soul to Heaven
where no one shouts or screams
my useless everlasting efforts shine and gleam.”
(from *15 January 2016″)

Together with the rest of his own poems they reveal a mind unspooling itself, looking to impose form and constancy, while heavily focused on his relationships with his central figures of care and love: his mother and God. In his poems of praise, I sense his comfort in external and eternal salvation, a connection to an invigorating higher spiritual realm, but I do find myself lost in abstraction, glossing over entries at parts.

As if pre-empting this, fifi’s own self-doubt of why anyone would bother reading his writing catches my conscience, and another musing on the definition of literature with fifi and Mummy leaves me to wonder whether questions of literary value are important at all here, especially since I feel compelled to not treat the work in an overly-forgiving, tokenistic fashion. Nonetheless, fifi’s strong personality and maturity beyond his nine young years prevail as “wonderful love helps me show my real mind” – his need for love and his gratitude towards his family are lovingly validated in conversations with his mother and by his family members’ individual reflections. 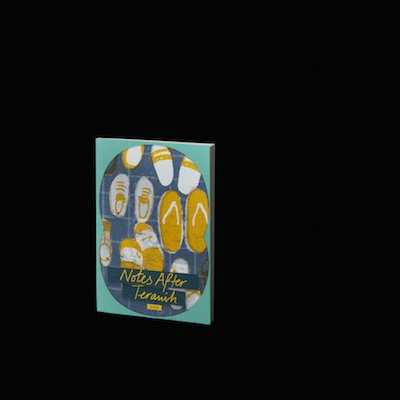 Setting my reading course to “Notes After Terawih”, I begin to notice a cumulative meditation on the family. Observations during these terawih prayers, or night prayers, during Ramadan form the basis of this collection where the personal and the communal start to gather. A tapestry of titles in a 6×6 layout akin to post-it notes welcomes me – one that reveals itself as a table of contents as I quickly find a pattern that corresponds between the titled ‘post-it notes’ and the sequence of untitled notes that make up the book. However, these seem to be slightly disrupted at points where the distinctions are not made clear (each new note is not titled), leaving me momentarily confused between pages. This is where I start drawing associations with Alfian Sa’at’s “Malay Sketches” because of the similar microfictional approach to writing about the Malay community. Even Mohamed Latiff Mohamed’s works come to mind. Yet one particular confession of confusion made by Ziks in “Another note” grounds me and reminds me not to rush to thematise her writing too quickly. Responding to the publishers’ question of her intentions as a writer, Ziks clarifies that she wrote these notes for herself. The anecdotal quality of her scattered observations lends a meditative intimacy, unlike the more overtly personal-is-political brand of Alfian’s and Mohamed Latiff’s writing.

Throughout the “Notes”, Ziks’ recordings flourish from the act of (re)capturing characters in short scenes that move her, from the “penguin uncle” her father drops off who buys her family milk to the “sleazy firemen” she recognises from a costume party elsewhere. These are cross-stitched with children’s games to pass the time and even quieter reassurances among some women who sit in solidarity, each carrying their own private anxieties, all forming a personal ethnography of sorts. Perhaps the most explicitly thematic reflection in the book comes when Ziks recounts attending a graduate forum where an American graduate student presents about the differences of understanding closeness in Asia and from a “Western idea”. But rather than playing the cultural spokesperson, Ziks reframes her observation of the forum as having “helped” her to understand how she situates herself within her family, extended family, and community. In “the last ten days”, I think of not only how provisional the gatherings during the terawih prayers have been, but also how the collective ritual of bringing private lives together – which at one point grew to a “symphony of sobs” – can feel oddly restorative, regenerative, restful. 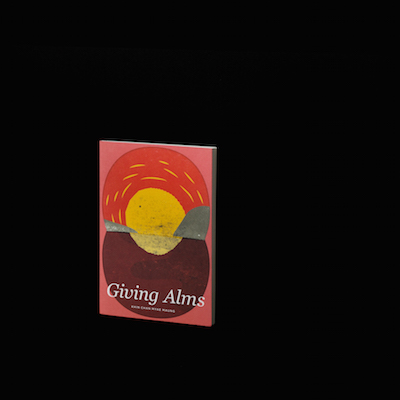 There seems to be little rest afforded, however, for the characters in Khin Chan Myae Maung’s three collected stories “Stillborn”, “Giving Alms” and “Plants That Grow In Shade”. An ode to the writer’s own inherited family stories, this collection is an affirming act of re-membering, a vivid reimagining of private tragedies at the individual and familial level. This is not to say “Giving Alms” reads as a memoir of a Burmese family’s trauma. In her Author’s Note, she writes of how as a young Burmese writer she “acknowledge[s] history but reject[s] the notion that it should define a whole people’s narrative”, but would it be fair to extrapolate the Burmese condition from these three sets of tales?

Khin Chan Myae Maung’s writing focuses on the agency of the individual, challenging them against larger circumstances of existential difficulty, while keeping a critique of political and systemic forces subtly in the background. In “Stillborn”, the mother protagonist Daw Sein reflects “it was not karma or the Universe that failed us, but the terrible indifference that we allowed to fester” – that connects the personal tragedy with the political backdrop of Arkar’s death at Rangoon university. In the titular story, the intergenerational debt that causes Mae Do’s family’s suffering is arguably brought about by the material production and distribution of cheap cheroot. Yet the story is charged with a metaphysical offering and appeal to the spirits of the white belly fish, leaving us with a lingering sense of the inexplicable.

Across the first-person and third-person narrators across the stories, the even-handed delivery and depiction of suffering is uncompromising, stoical and almost normalised. This is perhaps epitomised in “Plants That Grow in the Shade” where against the plot of a missing mother, an indifferent lizard with its lost tail becomes a metaphor for a searing loneliness that “was no stranger”, that would “return hours later with a new one in place, watching its old blood-stained appendage on the floor, haunting her”. Khin Chan Myae Maung undoubtedly wields a keen attention to the unspoken knowledges of inherited suffering and continually inflicted traumas, but perhaps these harsh narratives are given reprieve through her careful and sensitive articulation.

As a trio, the first three issues of “orbit” draw strength from their gathering and exchange, exemplified by the brief but fruitful “In conversation with” segments that explicitly create dialogue and connection not just across writers, but also their respective texts, expressing an insistence for dignity and compassion in their respective “insignificant destinies”. Perhaps “orbit” can grow to become an extended family of sorts, launching new writers as they give them a home for us to visit their stories on their own terms.

Published by Ethos Books in 2018, orbit is a new book series of small but impactful reads which focuses on unheard or little-known stories from our community and around the world which traditional publishing expectations don’t allow for. 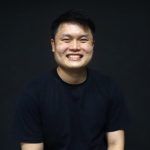 Nah Dominic is presently a PhD candidate at the National Institute of Education, Nanyang Technological University, Singapore where he is researching about secondary school students’ receptivity and resistance towards Literature pedagogies that are ethically oriented. As an arts writer, he has written book and dance reviews for ArtsEquator and FiveLines. He has also worked in the capacities as a dramaturg (The Second Breakfast Company/RAW Moves), a performer in his own autobiographical b-boy monologue, a co-editor for the Asian Dramaturgs’ Network E-Zines Vol. 1 to 3, and a rapporteur at the Asian Dramaturgs’ Network Lab 2018 in Yogyakarta, Indonesia. Occasionally, he mulls over how more people can be persuaded of the arts’ relevance and value in today’s schools and society.