2018 has only just begun, but the women’s rights movement is already making its voice heard with #MeToo dominating social media, and the Time’s Up campaign started by Hollywood celebrities. Sexual violence against women is in the spotlight. Now, Larry Nassar (disgraced former Team USA gymnastics doctor) has just been sentenced to 175 years in jail after hundreds of women came forward to take the stand against him for years of sexual abuse and misuse of his power.

With social media feeds and news outlets spreading this information, Emanuella Amichai’s The Neighbor’s Grief Is Greener set in a designer kitchen should be impossible to ignore and proves itself to be a difficult piece of post-modern work to swallow.

It all begins with a housewife (Ayala Bresler Nardi) robotically mixing up a mysterious concoction – presenting her ingredients with a huge static smile on her face, almost as if she is a pin-up girl for Walmart. She then takes the bowl and pours the blood on the white stainless floor, offering a final broad smile at the audience before she dies before the crimson puddle. We are greeted by a scene fit for murder.

The 50-minute performance tackles the ideas of domesticity, gender roles and the ideal woman through use of physical theatre and dance. Based on classic stereotypes prevalent in the 1950s, and set in a typical suburban American kitchen, the time period may feel foreign to a younger generation, but the clichés and visuals presented by the five-person ensemble are unfortunately too familiar.

Throughout the performance, a klutz with sporting ambitions (Merav Dagan), a stereotypical femme fatale with a cigarette on hand (Julie Nesher), a woman (Meirav Elchadef) with a pail over her head and a man both husband and aggressor (Jeremie Elfassy), joins Bresler Nardi’s Stepford wife portrayal in a series of interweaving, and mostly silent, vignettes in which violence meets slapstick.

Blood-stained and rejected by the other female stereotypes, Dagan’s character strips off her housewife garment to reveal a gymnastics leotard, before diving right into the blood to execute her synchronized swimming solo sequence. For a moment, it feels like an escape or liberation on her part, to break free from the strict confinements of society.

She ends her fabulous routine by putting her stained housewifely skirt back on. Despite the potential of breaking free, she inadvertently goes back to where she first started, forever trapped within the confines of a womanhood bound by the rules of patriarchy.

Elchadef’s woman is heavily objectified, voluntarily covering her head with a red pail and she communicates with her legs in various yoga positions, which could have been a signifier for strength and power, but all the man sees is skin as he stares down at her crotch and strokes her legs.

Nesher plays the classic American bombshell Marilyn Monroe, lip-syncing the starlet’s words as her interview plays through the speakers until she is silenced by death. She is an object of beauty, nothing more. The image echoes one used earlier in the show when a chicken is eviscerated, innards all pulled out and only the physical shell remains, ready for consumption, be it by mass media or a husband awaiting his dinner.

Nothing is more disturbing than the closing scene, during which the woman wearing the pail has it removed by the man, who then clasps her in a slow dance. The pair look happy, yet just a few minutes before, we have seen the man try to saw three women up into just their body parts. He literally treats the women like bodies of chicken: simply dead meat.

The Neighbor’s Grief Is Greener may leave a sour taste, but it replicates a narrative that is still being played out today, sixty years later. Women are still expected to dance alongside men, whether willing or not.

As the #MeToo movement has clearly demonstrated, should the neighbor’s grief remain one block away from us even though we all share the same pain?

The Neighbor’s Grief Is Greener by Emanuella Amichai ran from 23 to 24 January at the Esplanade Studio Theatre. The show is part of the M1 Singapore Fringe Festival 2018.

Driven by curiosity, Teo Dawn is a graduate of the Intercultural Theatre Institute who seeks to express all the voices in her head, in more ways than one. She can be found at http://teodawn.blog 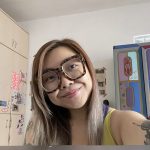