It was a Wednesday night and DPAC was packed. It’s just as well the staging of Gold Rain and Hailstones experienced a 10-minute delay because theatregoers kept streaming in well past 8:30 PM. By the time the show began, the house was about 90% full: a feat for midweek. An even bigger challenge for audiences was the 1 hour 50 minute performance time, sans intermission. But the crowd was undeterred.

They had come to see the restaging of a legendary piece of theatre, one that played to similarly packed houses in the 1990s when it was staged in KL, Penang and Singapore to rave reviews, and marked the birth of a seminal voice in Malaysian theatre: Jit Murad. Jit would go on to write many plays after his first hit, and his singularly unique blend of sardonic comedy, astute observations of overseas-educated Malay urbanites, witty social commentary, and wonderfully colloquial mix of Malay and English languages would set him apart from other playwrights of his generation.

This sixth iteration of Gold Rain and Hailstones is helmed by Gavin Yap, a theatre director who has worn many hats as actor, filmmaker, and screenwriter, and who considers Jit one of his literary heroes. With the exception of a few minor changes to the text, Yap’s direction is pretty faithful to Jit’s original script; the only notable change is in the casting.

Director Zahim Albakri’s earlier versions required only two actors to play 13 characters, switching back and forth between them by dint of deft costume changes or distinctive variations of accents and mannerisms. In these previous stagings, playwright Jit Murad himself would take on this formidable task of seamlessly shape-shifting into the characters he wrote, accompanied by fellow thespian Lin Jaafar.

The play is structured with multiple scene changes in multiple locations that occur at various points in the characters’ timelines. This structure complicates stage design because it requires enough visible clues to enable audiences to follow the fragmented plot. Such clues and cues are elegantly delivered by Tan Chung Cea’s fitting multimedia design, which gives the play a very contemporary look.

Melissa Teoh’s set also merits a mention because it is both as incredibly pragmatic and symbolically resonant as it is visually arresting; she offsets three open spaces on two different floors with one enclosed space that we can only see through a fine mesh screen. The enclosed space affords intimacy and lends certain events a veneer of nostalgia. The four different spaces are synonymous with the four different personalities on stage, and the set is cleverly designed to facilitate smooth scene changes between venues as diverse as cinemas, cafes, airports, bedrooms, and living rooms.

At its heart, Gold Rain is about four friends—all of whom studied abroad in the US and returned home to Malaysia—and how their lives intersect with issues of belonging, acceptance, identity, and change. All four carry the label ‘Malay’ as part of their official identity but each one wrestles with the pressures, expectations and traumas that such an identity bestows and bestirs. It’s uncanny how relevant and timely such issues still seem in 2019 Malaysia, more than two decades after the play premiered.

Despite revolving around serious and familiar Malaysian themes, Gold Rain is, by and large, a comedy. By his own admission, Yap shied away from overt social critiques in his direction, preferring to amplify the comedic elements and to focus on the dialogic relationships among the four friends. Perhaps this is the only way Malaysian audiences are able to digest such heady themes with their sanity intact; it might also explain why comedy is a much beloved genre in Malaysia.

The audience was a responsive bunch that Wednesday night, giggling and chortling throughout the play, frequently letting rip some merry guffaws. The playwright’s acerbic sense of humour is relayed through his true-to-life characters, whose lines are mined for laughs through perfectly timed executions by the proficient actors.

All four actors inhabited their diverse roles with alacrity and aplomb, but it was Sharifah Amani who stole the show with her alternating portrayal of five different characters.

Sharifah plays the role of Nina with kinetic vivaciousness, channeling her worldly, American-educated and tudung-wearing married self with such fidelity, it was impossible not to be riveted. But even though she seems happy to busy herself with managing her children, ordering her maid around, attending social events, and playing the part of the decorous wife, Nina is transparent about how her life adheres to a set of requirements that she has no choice but to fulfill. Sharifah is able to exploit this tension by infusing the character of Nina with a strong, albeit briefly revealed, tinge of bitterness.

In addition to playing Nina, Sharifah also takes on a few minor characters and her ability to flit between very different roles with fluid ease is impressive: she is gossipy and garrulous as Nina’s mother; frank and flirtatious as Chinese saleswoman Angela; snappy and sassy as blonde African American sex worker Odessa.

Sharifah Amani’s effervescence is matched by Ghafir Akbar’s flamboyance. Playing the only gay character, Ghafir manages to exude a larger than life persona without reducing Jay to a caricature. Jay is portrayed as a funny, warm, and earnest human being, so desperately wanting to be accepted that he learns to be inured to frequent teasing about his effeminacy. He is not closeted, but as a single gay man surrounded by a nest of straight friends, it would be easy to pretend he is not out either.

In contrast to how Sharifah and Ghafir depict Nina and Jay, the characters of Amy and Man are portrayed in a decidedly less ebullient manner. Redza Minhat’s Man is the 1990s Melayu Baru everyman: easy on the eyes, affable and respectable, well-to-do and well connected. He has his entire life planned for him, every decision made in advance so as to maximise his potential to fit like a glove in the proverbial status quo.

Man’s insecurities—in particular his lack of sexual prowess and ill-timed bodily effusions—are the perfect foil for Amy’s overconfidence. Decked out in boots and leather skirt as Amy, Farah Rani strides on stage like someone with a huge axe to grind. Her reputation as a precocious “Mat Sallehfied” wild child prone to sexual escapades and intellectual hedonism precedes her, but it is her propensity to pepper everyday speech with academic jargon that proves to be her undoing. Amy and Nina are both loquacious but it is Amy’s pretentious vocabulary that cements her outsider status.

Unlike her three friends, Amy—the newest returnee—finds it hardest to reacclimatise to life back home. Her out-of-placeness is most evident in the language she uses: having grown up in an English-speaking household, she barely understands Bahasa Malaysia, but for a smart woman she is uncharacteristically clueless about why the locals look upon her with disdain. Amy also resists conceding any part of herself in her half-hearted attempts to belong.

Malaysia is a nation built on compromise and the Malays in particular are well schooled in the virtues of tolak ansur and gotong-royong; the highly unusual pact between foes that birthed the current Pakatan Harapan government is testament to the necessities (and some may argue, triumphs) of compromise. Nina, Jay, and Man have learnt to compromise with varying degrees of success; we can argue at what cost but the results speak for themselves: all three may suffer some occasional personal tribulations but, on the whole, all are doing reasonably well.

Their compromises enable them to adapt, accept their lot, and survive in the land of hailstones whereas Amy’s constant non-conformism affords her no solace. Sadly, her escapism to the US—purportedly the land of individualism and opportunity—yields her no fulfilment either. Her father’s sickness provides the excuse she needs to return, even though she continues to struggle with the lived realities of a changed Malaysia. Amy’s struggles resonate with some of us, while others among us may find affinity with the compromises of her friends.

Gold Rain explores these universal and relatable themes in a manner that is at times ribald but more often than not the micro-level observations are incredibly astute and Jit’s humour is warm, not scathing.

Aside from its cast and staging, for me the genius of Gold Rain surely derives from its spectacular script: the wordplay, the tongue-in-cheekiness, the nuances of meaning, the brashness, the diverse accents and dialects—all of which reflect many Malaysias in one country. Jit Murad’s characters speak both Bahasa Malaysia and English with the kind of practiced ease one associates with a native tongue, in some instances combining words from both languages without a second thought, effortlessly performing a kind of lived linguistic hybridity.

The fact that his singularly Malaysian characters are still so fluidly inhabited by new actors 26 years after the play was written speaks volumes as to why Gold Rain and Hailstones remains an evergreen piece of theatre.

Gold Rain and Hailstones was produced by The Instant Café Theatre Company. Written by Jit Murad and directed by Gavin Yap, it ran from 1 – 11 March 2019 at Damansara Performing Arts Centre. This review is co-published in partnership with Critics’ Republic. 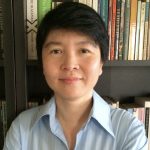 Carmen Nge is currently Assistant Professor at the Faculty of Creative Industries, Universiti Tunku Abdul Rahman (UTAR), Malaysia. She has been writing about Malaysian culture, specifically the visual arts, for a variety of publications for more than fifteen years. Her most recent book is Excavations, Interrogations, Krishen Jit & Contemporary Malaysian Theatre, co-edited with Charlene Rajendran and Ken Takiguchi. Carmen teaches broadly in the subject fields of Malaysian media and culture, games design, and creativity in education.