What are human beings without language, possessions and a sense of time and place? How do we make sense of our surroundings? Stripped of all trappings of civilisation, can one start from scratch and create a brand new world with form and function?

This unique, challenging and wildly entertaining production, conceived and directed by Halory Goerger and Antoine Defoort of French theatre collective L’amicale de production and presented as part of this year’s Singapore International Festival of Arts, seeks to figure out just that.

Like the first stirrings of life in a new universe, pools of light tentatively flit across the darkened stage in the opening moments of Germinal. Something is about to happen but it’s not quite there yet. As things finally stabilise and light floods the space, we see four individuals (Halory Goerger, Jean-Baptiste Delannoy, Beatriz Setién and Denis Robert) on a bare, concrete slab of a stage. Each is fiddling with a portable console that has the ability to vary the environment around them, including the light. 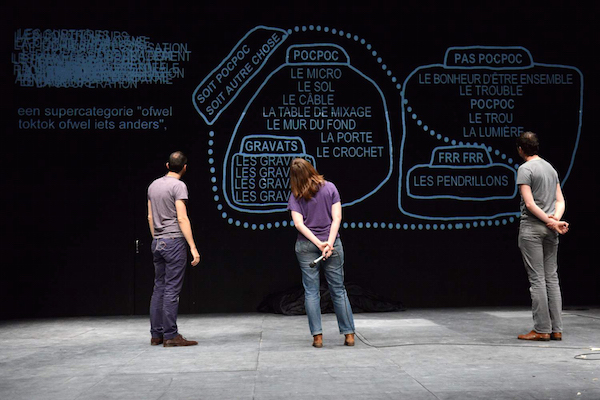 One of them wanders around and discovers the scintillating ability to project his thoughts onto a panel on the wall. The others follow suit. Things seem to be going well; they are now able to communicate through a sequence of projected text. But is there a more efficient way to achieve a meaningful conversation? We are reminded of the importance of language as a marker of identity and tool of control. After several minutes of silence on stage, the moment when one of the actors discovers the ability to speak is positively electric.

A cult favourite at festivals around the world, Germinal champions a theory of everything that is both grandiose and goofy, riffing on concepts of philosophy, phonology and physics in a valiant attempt to explain human civilisation. Central to this is deconstruction – the concept of breaking things down into its various elements to expose internal contradictions and hidden meanings. Here, it takes on a literal turn as the stage itself is hacked apart to uncover an assortment of objects like microphones and speakers.

All this technology however makes little difference and only presents new challenges. A telephone helpdesk operator whom the group decides to consult helpfully suggests that they buy the laws of thermodynamics to avoid disaster. They receive a ‘manual’ of their world that turns out to be a laptop. Nobody quite knows how it works. 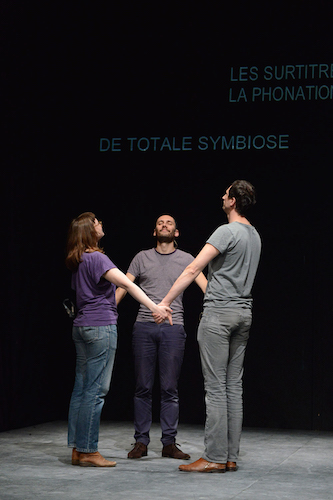 As these flustered souls try to list out the various ways they can communicate and attribute meaning to these terms, they settle on a system that is outrageously childish. Tangible objects, which make a sound when hit, are ‘pocpoc’ while everything else becomes ‘not pocpoc’. But can this distinction be sustained? Where exactly do catharsis or karmic bliss fit in? A feverish mind map snakes across the wall as the categories grow increasingly tenuous.

One does not need to be au fait with theories of philosophy or science to be entranced by this rich, 75-minute production. Goerger and Defoort have crafted a text that is playful and profound in turn, offering gems of wisdom alongside liberal squirts of whimsy. Music is artfully woven into the narrative and multimedia is practically a character of its own. Words appear, disappear and get jumbled around with nothing more than a few careless waves by one of the performers. In a delicious self-referential moment, when the performers fiddle with the settings on their laptop ‘manual’, we see every stage of their thought and decision making processes displayed on a screen in real time. As they begin to squabble, labels such as ‘denial’, ‘rage’ and ‘sense of finiteness’ float above their heads.

Germinal encapsulates this year’s SIFA theme of enchantment brilliantly, giving us a sense of wonder as we look at the world anew and laugh along in delight and dismay at its many complexities. We are reminded of the basic human desire to stake a claim to a space and tell ourselves that our actions matter.

It’s only in the final moments, when these four characters decide to re-live their entire adventure in chronological order with the aid of the tools and systems picked up along the way, that we see their efforts bearing fruition. Seated around a ‘swamp’ filled with tiny balls, saturated by light and sound, they are finally communicating, breaking down those boundaries and making this big, bizarre world their own.

If only we could do the same.

Germinal by l’amicale de production saw its Asia-Pacific Premiere at the Singapore International Festival of Arts 2017. It ran from 31 Aug to 2 September at SOTA Drama Theatre.

Guest Contributor Naeem Kapadia is a finance lawyer and passionate advocate of the arts. He has acted in and directed student drama productions in both London and Singapore. He has been writing about theatre for over a decade on his personal blog Crystalwords and publications such as London student newspaper The Beaver, Singapore arts journal The Flying Inkpot and Singapore daily newspaper TODAY. Naeem enjoys cooking, travel and running.

Website
Naeem is an arts reviewer and commentator who has been writing critically about performance in Singapore since 2011. He runs a dedicated theatre blog, Crystalwords (crystalwords.blogspot.com), has contributed theatre reviews to publications such as arts journal The Flying Inkpot and Singapore newspaper TODAY and participated in workshops and panel discussions for organisations like Centre 42. He currently sits on the Board of Directors of Arts Equator and co-hosts the theatre podcast for the site.