A family left stranded in the aftermath of a father’s seemingly irresponsible, selfish suicide, must learn to navigate its way through the nooks of grief and crannies of letting go and letting be, all whilst holding to semblances of hope through a widow’s grief, a mother’s denial, and the celebration of a daughter’s life. In its third staging, Poop! returned with a perfect blend of heartbreak and hilarity that blurs the fine line between life and death, and bringing life once again to Chong’s beloved characters Emily, Mummy, Granny, and Daddy.

In Daddy’s (Julius Foo) reincarnations, manifesting in NTUC plastic bags, NEWater, talking toilet bowls, in the far reaches of Emily’s unlimited child-like imagination, Chong’s direction fleshed out the pure ingenuity of his script, portraying the limitless ways in which our loved ones live on in the most insignificant daily objects and things even after death. Riddled by these symbols for death and decay, life and healing, Granny (Neo Swee Lin) and Mummy (Janice Koh) find themselves struggling to straddle the fine line between holding on and letting go, finding every way possible trying to explain the concept of death to Emily (Jean Ng), a little girl who seems to understand death and accept its inevitability more intimately and easily than her adult companions could.

Bridging the divide between the play’s realms of reality and fantasy was Poop!’s clever puppetry, complemented by precise lighting direction and stage design that kept the puppeteers completely out of sight and enhancing the believability of absurd impossible scenes that included Daddy’s disembodied limbs, a floating leaf, the iconic NTUC plastic bag, a pair of shoes ambling by themselves. Credit certainly goes to the puppeteers, Zee Wong, Ang Hui Bin, and Darren Guo who integrated both excellent puppetry and physicality throughout the play with seamless fluidity.

With a raised platform upstage, the new dimension of a vertical plane (instead of the 2-dimensional floor-plan staging of previous stagings) created clear demarcations of spaces for individual characters who ascended this plane into a fantastic realm, cleverly complementing the temporal and spatial limits of reality on the ground – evidently, the living (Grandma, Mother, Daughter) were confined to these earthbound limits, while Daddy’s spirit, Emily in her imaginative states, and other ghostly beings could easily traverse between one realm and another.

This season’s Poop! delivered a comically tragic and important narrative of life and death that was nothing short of shattering, compelling audiences to confront the harrowing fears that surround the concept of mortality in both truth and honesty.

A terrifying tale of paralysis, horror, and trauma, The Spirits Play tells the stories of five spirits stuck in spiritual limbo in the aftermath of war: specifically, World War 2.

This iteration of Kuo Pao Kun’s play has gone through a restructuring of the spirits’ individual monologues, which were originally split into five separate portions. Instead, director Oliver Chong interweaves the monologues of the Man, Woman, Girl, Poet, and General, as they take turns to deliver parts of their stories, effectively accentuating the blend of their personal narratives. This eventually culminates in the realisation of the one thing that binds them together despite having experienced different facets of the war: the excruciating pain of lost loves, hopes, and lives.

Opening to disconcerting sounds of gasping followed by scattered, piercing silences, The Spirits Play is a tale of enslavement to the horror and trauma specifically in contexts of war, made manifest in physical expressions of absolute terror, raspy gasps, monotonous chanting, and haunting laughter throughout the play that enveloped a very quiet audience.

Audience members grew restless due to the play’s slightly draggy trajectory, but all was objectively well until the rather shocking and obvious script prompts that had to be shouted across the stage to the General from a prompter stationed backstage. Almost like a reversed echo that could have been taken for a stylistic choice, the very inconsistency of these backstage prompts was what gave it away as the audience could clearly hear which parts of the script was memorised and which were not, with chunks of monologue or dialogue delivered only after prompting and some delivered without.

Resurrecting the very real paralysing terror that comes with the aftermath of war, The Spirits Play was a excellent achievement on the part of theatrical lighting (by Lim Woan Wen) in vibrant shades of blue, green, and purple, as well as set design that was defined by fluttery white pieces of paper that covered the ground resembling ashes, and commendable use of shadow puppetry. Ending at the height of terror by use of very disturbing sound design (by Darren Ng) inducing a suffocating atmosphere enclosing in on a full red moon that hung above upstage centre, the play’s brilliant conclusion unfortunately felt largely unearned by its overall progression. 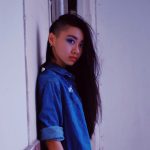 Cheryl is a multi-disciplinary performance and visual artist based in Singapore, with a background in theatre and performance. She creates experiential and experimental works across various mediums especially inspired by astronomy, astrophysics, spiritual ecology, and the natural world. She also trains in circus arts and acrobatics.

Current artistic and research projects include exploring exploring the concept of Time and all its possibilities on a cosmic scale and the relationship we have with it as human beings, Hawaiian and Polynesian traditions of sea voyages and wayfinding by reading the stars, as well as how personal journeys with spiritual and deep ecology can be expressed through art. Past projects have explored death, trauma, and the afterlife, Southeast Asian folklore and the supernatural, and Buddhist philosophy on mortality and death, temporality, and impermanence.