This essay is the first in a new series where artists and writers reflect on artworks that were personally important to them.

Syria, climate change, Brexit, Trump, the loss of beloved public figures from Prince to Muhammad Ali — my friends and I couldn’t wait for 2016 to end. But the sense of renewal that a new year brings isn’t just bolstered by the hope that the passing of time will bring better fortunes. No, the troubles of yesterday are today’s inheritance. What the occasion requires is will. As it always has. New year’s resolutions are exercises in optimism: a wager that a serving of self-determination might lead to self-improvement; and that, in the mix, we might do something of value in the following three-hundred-and-sixty-odd days. My dear friend Len and I have this running joke: every holiday season, we make absurd pledges like becoming five times better in the next year. As time has gone by, we’ve gotten less ambitious, aiming for only two times better. Currently, we’ve set our sights at five percent.

I don’t mean to be gloomy. But it took a day into 2017 before more sad news arrived: John Berger died. Famous for his 1970s book and BBC TV series, Ways of Seeing, Berger is a role model for anyone who aspires to write compassionately about art, culture and society. As I mourn his passing, I am also beset with fond remembrance and a sense of responsibility to return to his work. And isn’t that the point in reflecting on art that made an impact on you back in the day? To try and reconnect with that experience of inspiration, and in doing so, more fully learn the lessons of it. 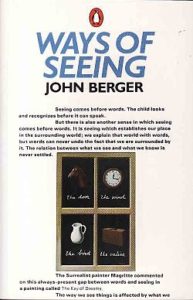 However, rather than “inspiration”, my title says “tuition”. It’s a word I’ve rarely used in conversation, and possibly never in print, or online for that matter. In the U.S., the word typically refers to college fees. In Singapore, I think of after-school private lessons — as in, “sorry, can’t play this afternoon, got tuition”. Something that’s good for you, but hardly pleasurable is not how I want to cast “learning” in general, nor how I would contrast art against entertainment. Nevertheless, the word sticks in mind. Perhaps because, up until my late twenties, learning from art has always been extra to the curriculum of life. One of the major public policy problems of our time concerns greater access to culture; art should be a bigger part of everyone’s lives. Yet I also feel that we shouldn’t be reluctant to recognise that art has its costs, not only to society, but also to the individual audience member, and not only in material terms — like funding and education — but also emotionally. To see a good play is to do at least a bit of work, even when it is thoroughly enjoyable.

While I haven’t been to the theatre in a while, I can readily recall a few stand out performances from the past which have made lasting impressions. Jo Kukathas in Samuel Beckett’s Happy Days is one of them. It’s been, what, more than five years since I saw it in Kuala Lumpur? Well, actually, it was staged by Instant Café in the summer of 2006 — how quickly a decade has gone by!

Like most Beckett plays, this one is about the passing of time, where nothing much happens. Beckett’s universe is one where life is stripped bare, where speech and memory are not a given, but are struggles and compulsions. He famously wrote (for the ending of his novel The Unnamable): “You must go on. I can’t go on. I’ll go on.” In Happy Days, a middle-aged woman, Winnie, rambles at her taciturn husband, Willie. In the first act, she’s buried waist deep. Among her rituals is the inspection of the items in her bag, which include a comb, toothbrush, bottle of medicine, lipstick and a revolver. Each object triggers a reminiscence about a specific incident associated with it. In the second act, she’s buried up to her neck. 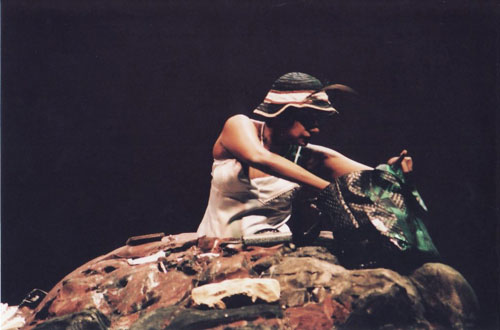 Winnie presents a lot of challenges for the actor. The absurdist play may be far from naturalistic, yet it is full of genuine pathos. Its basic themes may be clear, but its meaning is opaque. “What’s my motivation?” really isn’t the question a performer should be asking of Beckett. For the author, playwright and sometime director, there is nothing else but the text, which includes his spare and strict directorial instructions. His favourite for the role was Billie Whitelaw, who gave him what he wanted: “no interpretation, just perfection” — a pure vessel for his words.

It’s hard to imagine Jo Kukathas signing up for anything like that. An actor of range and virtuosity, Jo has had her fair share of parts, from Shakespeare to more contemporary regional fare, like Asian Boys Vol. 1 by Alfian Sa’at, or Huzir Suliaman’s one-woman show Occupation. In her body of work as an actor as well as director, she has demonstrated depth, complexity and a restless emotional intelligence. I was not privy to her process and preparation for Winnie, but I can’t help but picture her continually quizzing herself about the character, trying to understand, trying to make her her own — and isn’t that interpretation? Like any accomplished theatre player, Jo knows how to convincingly perform feeling deeply on stage. The character of Winnie could easily turn into a showcase for a star turn, for ACTING in all caps. Yet, for me at least, Jo did indeed deliver a certain “perfection” with her Winnie. Let me try to explain. 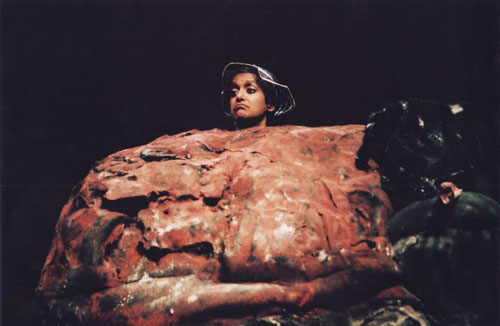 In my twenties, I read so much Beckett, that I feel his oeuvre has become part of the deep make-up of who I am as a writer and a person. Before the turn of this century, I had a dream: I was on a university campus, going to see Beckett for a tutorial about my writing. He was encouraging, but also showed me precisely the fault in what I was doing. I was so excited and soon woke up. But I could never recall what it was that he told me. Only now, in thinking about what was so spot on about Jo’s Winnie, do I realise what this secret might have been. I’ve only seen a few live presentations of Beckett in addition to some recorded ones. More than any other, Jo’s performance confirmed why he is such an important author for me, and, for that, I’ll be forever grateful to her. Jo’s carefully crafted portrayal is like a parable of the writer’s struggle. Toil over every word, but in the end, don’t be afraid to cut and let go. Don’t be precious about words, even if they are all that you have.

We already know that there are challenging times ahead in 2017, let’s hope there will also be some happy days. 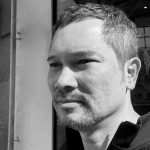