“I finally felt that being an artist was a meaningful vocation,” Chua Mia Tee says towards the end of a career-spanning interview.[1] Best known for his 1950s oil paintings Epic Poem of Malaya, National Language Class, and Portrait of Lee Boon Ngan (depicting his wife, also an oil painter, who passed away in April), the 85-year-old live-represented Malaya through his cast of immortally young characters, who point and gaze towards their goal of an independent, integrated nation with steely resolve and idealism, tinged with existential uncertainty (“Siapa nama kamu?” “Di mana awak tinggal?”).

This formative generation and its artistic and spiritual heirs come to life in Nine Years Theatre’s Art Studio, an adaptation of Yeng Pway Ngon’s eponymous Chinese-language novel from 2011, which, with intimate and pointillist brushstrokes, painted a sprawling picture of love and loss in a time of crushing progress. Opening the Singapore International Festival of Arts 2017, this three-hour production boasts faultless performances and adds tentative notes of fiction’s falsity and freedom, but hews too reverently to its source text, creating a formalistically admirable Art Studio that is unnecessarily difficult to gain entry to, let alone love.

Opening in 1979 Singapore, divorcé Yan Pei (understatedly played by a presence-filled Tay Kong Hui) is a purist painter in the mould of Van Gogh, who barely supports himself by teaching figure drawing. His students don’t stick around for long: Jian Xiong (Neo Hai Bin) is forced to flee to Malaysia to fight for the Malayan Communist Party, deserting his devoted fiancée Mei Feng (Jodi Chan); Ning Fang (Ellison Tan Yuyang) jets off to Madras to study Hindu devotional singing under her charismatic teacher, leaving Yan Pei’s other pupil, the quietly talented Si Xian (Timothy Wan), to pine for his childhood sweetheart over decades and seas. In a converted bungalow, rented from a retired physician, their nude model of the day is the pubescent Ji Zong (in an inspired casting, also played by Neo)—all elbows and knees, sketched by pairs of eyes that even by the 2000s are still watching, still waiting for their youthful loves’ return, their creative or political dreams’ realisation.

Remarkably, director-scriptwriter Nelson Chia has chosen to reflect a large majority of Yeng’s more than 240,000 words and intersecting storylines on stage. While the slow accretion of prosaic to poetic details found a cosy home in the epic novel, when almost ceaselessly read in the live form of theatre—albeit in turns by a fine ensemble trained in the Suzuki method—these words, words, words come across as so much exposition, especially as the characters in question sometimes stand as stock still as life models. After a cheeky and punchy start, featuring a self-aware dig at Singapore theatre’s age-rating system (Advisory 16 here for “mature content[:] sexual references and references to violence…[plus] political ideologies”, by the way) and a scene-stealing mynah bird, Art Studio’s energy and promise of a bold interpretation wanes. Before long, I am wondering why we should care about Yan Pei’s former marital woes, Jian Xiong’s exile, Mei Feng’s brain-tumour diagnosis, Si Xian’s artistic growth, Ji Zong’s sexual awakening—just some plot points—when they are largely not shown, but told.

After the intermission, in day-to-night contrast, Art Studio lets us care by letting up on the chorus narration. Rather magically, the pace speeds up from largely interior to outward action in this last hour even as the coterie of dreamers is haunted at every turn by mortality and a generation’s worth of memories—some are even granted second chances.

Returning from Hong Kong as an academic, Ji Zong bumps into his fellow dropout-made-good friend, Ah Gui (Hang Qian Chou), who had inducted Ji Zong into posing at the art studio for a quick buck. A reformed samseng (gangster), Ah Gui has settled down drunkenly with Xiu Zhen (Jean Toh, serving Ah Lian realness), but is still trailed by hovering flies—an initially comic, but gradually moving detail given sufficient time and independent space to illuminate life-shaping friendships and the everyday tragedy of perpetually deferred promises to meet “another day, perhaps.” Their youth touchingly portrayed by another set of actors, neither party wants to leave their potentially last meeting, for fear that “once we parted, these teenagers would vanish.”

Even when the ensemble returns in the last third, it is with a lighter touch. The dozen actors collectively blaze with their acerbic, satirical portrayal of Ye Chao Qun, a fame-hungry and litigious “multidisciplinary artist,” who serves as Yan Pei’s foil. Ye’s segments are stylised as a sort of group xiangsheng (Chinese comedic crosstalk), in which every punchline lands effectively in swift succession, topped off here with a clincher on the verge of his career’s eclipse: “It took him 20 minutes to finish an art piece but more than an hour to clear his bowels.”

The chorus is even more grippingly directed in the Paris portion, our penultimate location after dizzying stints in Hong Kong and Taipei too. Effectively collapsing Si Xian and Ning Fang’s fortuitous reunion trip from Paris to Barcelona to Lyon in the novel into just the City of Light and Love, the raucous, red parade of French stereotypes (baguettes, berets, poodles, mimes!) picks up on the opening scenes’ undermining of the willing suspension of disbelief. Constantly reminded that we are watching a performance, the ending’s self-conscious sequence of wondrous coincidences makes a case for art’s power to stop time. As opposed to Chua’s sanguine backwards glance, when being an artist and freedom fighter finally becomes futile here, even if ambitions are posthumously achieved, Art Studio seems to suggest that fiction and the imagination exist as the salve for wish fulfilment and some sort of eternity.

“Don’t let this second chance slip away,” Si Xian is told in the play, without understanding it. In the novel, on the verge of leaving Ning Fang for perhaps the last time, Si Xian is struck by how “the expanse of green [out of the railway carriage] reminded him of time passing … he wished the window could keep it in place. But the train kept moving, pulling itself forward …”. In its journey from a solitary and self-paced medium, to a communal, collaborative, and transient one, Art Studio the play did justice to the anecdotal quality of the rapidly embraced novel (ranked by Asia Weekly as one of the 10 Best Chinese Novels of 2011, it won the Singapore Literature Prize 2012; a spotty English translation appeared in 2014, and Liao Jiekai directed a trio of 2016–7 short films based on it) in its straightforwardly dramatised sequences. The production was less successful, if more original, when it intermittently took liberties with the tale and storytelling. For instance, from a combined block, Wong Chee Wai’s inventive, modular set of translucent screens on wheels—shifted by stagehands and actors themselves into a train tunnel, bus, cave, rooms, portals—became reminiscent of a painting frame slowly taken apart, perhaps never to be united again, tying in with the play’s bittersweet, ambiguous ending.

All things considered, it was a privilege to witness a Singapore company expand its repertoire and its scale by such leaps and bounds, and its ensemble performing as one cohesive whole. But the real homage to Yeng—a giant of a writer who has battled political detention, a lawsuit by a fellow artist, and who keeps on writing despite two advanced forms of cancer—happened at the curtain call’s garlanding. His body of work deserves to stand on its own, or be truly adapted without his long, shimmering shadow hovering over it.

“Capturing history with passion” by Akshita Nanda (The Straits Times)

Adapted from the novel of the same title by Yeng Pway Ngon, Art Studio (画室 / Huà Shì) was written and directed by Nelson Chia and produced by Mia Chee. Commissioned by and opening the Singapore International Festival of Arts 2017, the Nine Years Theatre play ran from 17 to 19 August 2017 at the Victoria Theatre. This review is based on the 16 August 2017 gala performance.

Guest Contributor Dan Koh is an independent writer, editor, and film producer. The KADIST Research Fellow in Collections 2017–18, Dan’s latest chapbook, Jurong, My Love, has just been published by The Substation. 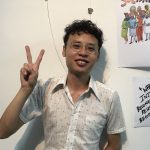 Dan Koh is a writer, book editor, and film producer from Singapore. He is the author of chapbook Jurong, My Love (2017), and an editor of art and history books like Shubigi Rao's Pulp III (2022). In film, he was one of the producers of Yeo Siew Hua's A Land Imagined (2018), which he also script consulted. With Siew Hua, Dan runs the production company Incantation Films. damnkohl.com