Goethe Institut Jakarta’s Art House Cinema screens Teddy Soeriaatmadja’s film titled About A Woman. The film is a story of two strangers that are made to live under one roof. One is a 64-year-old widower. The other is a 17-year-old housemaid. How do the two navigate their awkwardness, uncertainty and tension? Catch the film this Tuesday at the Goethehaus. For more information, click here. 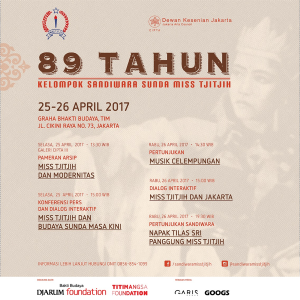 The Sundanese style of play, Miss Tjitjih, has been around in Indonesia’s theater industry since 1928. The Theater Committee of Jakarta’s Art Council celebrates Miss Tjitjih’s 89th anniversary with a series of events including a performance, interactive dialogue, and showcase of archives related to Miss Tjitjih. To learn more about Miss Tjitjih, join the series of free events this coming Wednesday and Thursday at Taman Ismail Marzuki. For more information, click here. 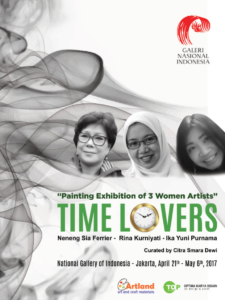 Time Lovers is a painting exhibition by 3 female painters. The exhibition has a sub-theme of “Kreativitas Ibu Sepanjang Masa” or a mother’s everlasting creativity. A mother’s creativity begins when she creates a child. The creativity continues to other things that a mother can create, such as these paintings, while she continues to perform all her activities as a mother. There are a small number of female visual artists in Indonesia as compared to their male counterparts. Show your support for female visual artists by visiting this exhibition! For more information, click here. 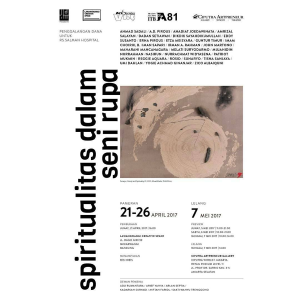 40 of Indonesia’s prominent artists are exhibiting their work at Lawangwangi in the exhibition Spiritualitas Dalam Seni Rupa (Spirituality within Visual Art). This exhibition is a collaboration between Lawangwangi and PT Salman Rasidi Semesta and is held to raise funds to build the Salman Hospital. Artists whose works are exhibited include Melati Suryodarmo, Nasirun, Tisna Sanjaya, Sunaryo, A.D Pirous. These works will later be auctioned in Jakarta on 7th May 2017 at Ciputra Artpreneur Gallery and all proceeds will go towards the development of the hospital. For more information, contact Lawangwangi at http://www.lawangwangi.com. 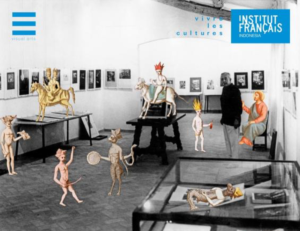 As an homage to France’s most popular poet of the 20th century, Institut Francais Indonesia – Bandung presents an exhibition of Jacques Prevert’s collages. Prevert, a poet, songwriter, playwright, and screenwriter, is most famous for his film Les Enfants du paradis (The Children of Paradise). Through his works, Prevert makes commentary of the state of the world. Prevert collages were produced circa 1950s and 1960s and are beautifully surreal. Don’t miss this chance to see some of his works. For more information, click here.

In conjunction with Jacques Prevert’s collage exhibition, Mediatek of Institut Francais Indonesia – Bandung, together with SemAta children gallery holds a Pop Art Workshop for all ages, young and old. With a fee of 80,000 IDR, you can join this workshop and make your own fun Pop Art. Groups and schools can coordinate for a private session. For more information, click here. 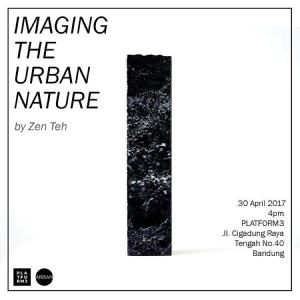 PLATFORM3, In collaboration with the ARISAN project presents an artist talk with Singapore-based Zen Teh. Zen explores the relationship between humans and nature and highlights situations where the two collide. Due to the varied differences between one site of nature to another and one human to another, Zen’s artworks is site-specific and are respectful of these differences. This artist talk will be moderated by Roy Voragen. For more information, check PLATFORM3 Facebook page here.