Skip to content
While acknowledging the value of art in addressing national trauma, Pristine de Leon raises questions about the limits, and ethics of representation on stage.

In Manila last June, live theatre returned in a black box holding half its capacity. The small crowd at the Cultural Center of the Philippines’ Tanghalang Huseng Batute makes the 17th year of the Virgin Labfest (VLF) feel like an intimate reunion—but at its heaviest moments, it also seems to invite an unburdening, even a reckoning. A recitation of names and a cry to stop the killings conclude one play. A gunshot ends another, which cues a very discomforting applause. Being billed as a festival of untried, untested, and unstaged plays has, for years, allowed VLF to engage the social under the wide banner of the experimental. But to what extent can a festival be a holding place for emergencies?

Co-directors Tess Jamias and Marco Viaña have put together 12 one-act plays, several of which show an insistence, not just an ambition, to absorb crisis and collective trauma, from sexual harassment to extrajudicial killings. There’s an interesting tension happening between their approaches, which makes me wonder how we attend to collective wounds. Do we tend to bodily injuries by naming the structures that inflict them? Or do we approach trauma as something more unwieldy, like a thick, corrosive coil in the belly that can’t be named, much less teased out?

I’ve been drawn to the kind of evasiveness that runs throughout Ryan Machado’s Huling Haraya nina Ischia at Emeteria. Set at a residence in provincial Looc, Emeteria (Kiki Baento) and her daughter Ischia (Jovy Vieja) keep their small store of sundry goods open as they prepare for the daughter departing for college. When Ischia considers moving in with her father’s new family, the two gradually circle this old sore spot, joking around as they fold clothes and pack away. The chatty Ischia wants to draw out a raw emotion from the stiff, resigned, and for the most part grumpy Emeteria through a swig of Emperador brandy. It might be their last evening together, the synopsis tells us, but the play itself never makes it clear why. Like Emeteria, the story detains its revelations.

Why do the characters let their male neighbour bully them into handing over a bottle? Who was the man who strangled Ischia, whom we only know through the girl’s reflexive shrieking? Director Regina de Vera harnesses the heft of these narrative silences, and overlays the performance with atmospheric sound. Bird sounds, streaks of green light, a rumbling, and a gentle hissing repeatedly stall the action. Mother and daughter recognise the spectral presence that the sound announces but recognition never defers to verbal explanation. What menacing vitality does Ischia address as she forcefully snaps the leaves from the vines, the same incandescent force that enchants Emeteria at the end? In his notes, Machado wonders why we forget certain injuries so easily, to which de Vera responds by foregrounding “the complexity of the feminine wound.” The work gestures to these injuries but never fleshes them out. I imagine that this evasiveness keeps the wound from turning into fetish. It lets us dwell instead in silences and shifting weathers.

The wound marks many characters in this festival. There is the girl, with sadly little agency carrying the dead weight of a wound, in Jerry O’Hara’s Liberation. It stages the conflict between three invading Japanese soldiers as they fight over her fate and contend with their own deaths. There is Hija, the violated researcher in Eljay Castro Deldoc’s Walang Bago sa Dulang Ito. She ventures to study a millipede’s ecosystem and falls into a web of sexual violence and discrimination. And there’s Alex confronting long-buried hurts in Dustin Celestino’s Fermata. While healing is always a tall order for theatre, I think of the possible connections between liveness and repair.  How might theatre’s immediacies enkindle modes of feeling with and working through?

Alvin Joseph Cledera, who watched VLF for the first time with his partner Dan Fetizanan, relays his impression that the festival is where “creativity and politics coincide. It helps in the discussion of present issues, such as the pandemic, the government, history, minorities (LGBT+), and society in general.” Meanwhile Fetizanan, a regular festival-goer, describes this year’s line-up as “experimental, fresh, and provocative as the previous ones.”

Maybe it’s this promised crossing between the topical and the experimental that attracts audiences each year, offering a context, an ever-tentative location to sit through thorny issues. Fermata, in particular, takes on what Cledera describes as a difficult topic that warrants discussion: “It was macho, which was dragging at first—but [against this first impression, it] made a conclusion of how fragile masculinity really is and how men ultimately suffer because of it…A realistic scenario such as a ‘play’ would really help tackle this difficult topic especially between men.” 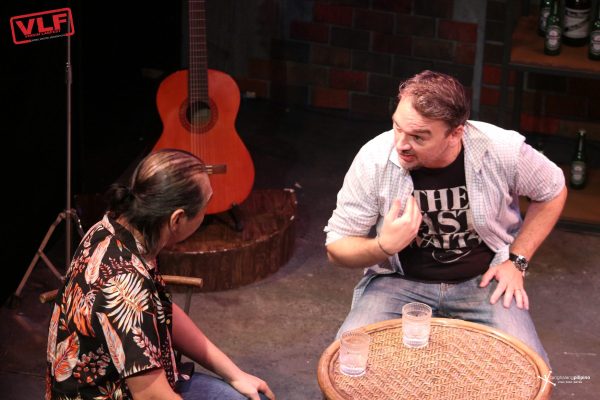 An ethical dilemma is at the nervous heart of Fermata. Ben (Xander Soriano) visits his old friend Alex (Basti Artadi) in a jazz bar closing for the night. Their meeting comes after the passing of Ben’s father, a celebrated music teacher who, we’d learn, had molested his young male students. Much of Fermata’s dialogue is a battle of reasons and justifications. Alex is the macho, mellowed-down family man who poses the difficult question of what exposure might do to victims like him. Ben is the guilt-ridden son, desperate for answers, and a moral anchor. We watch them stalk each other onstage, confide closely on a table, and dwell in pregnant pauses. There’s so much restraint and tentativeness in Luarca’s direction; he doesn’t thrust upon us the full weight of that wound. While music provides Celestino his shining metaphor—‘fermata’ here is the prolonged note, the impossible durations—in Luarca’s hands, music grants a leavening between intensities: the hesitant strumming and strained singing that prompt a turn in the conversation; the song crackling through a phone speaker, which coaxes Alex back onstage and repairs the silence.

Admittedly, it’s difficult to get past Fermata’s topicality, especially when one is aware that local theatre itself has been grappling with news of harassment that broke out last year. I was looking for how Celestino might complicate the question, and not simply latch onto given resonances and parallelisms. Perhaps it’s when the play takes us to the murky limbo of trauma, forgetting and false memory that the text achieves more of its thematic complexity. What if there’s a reality where no one was molested, Alex asks. He tries to flip the facts, attempting a magic trick of a logic where abuse isn’t all it appears to be. Negotiation is laborious—but is it also, along with forgetting and evasion, a knotty kind of not-knowing that is particular to trauma’s victims? It’s interesting how Huling Haraya and Fermata suggest these. The feminist Griselda Pollock describes trauma as “beyond representation; it hovers at the limits of both our consciousness and remembrance.”¹  Perhaps in art, the wound is a gap in the telling, not always a violation to be re-enacted, but a silence to be stretched. 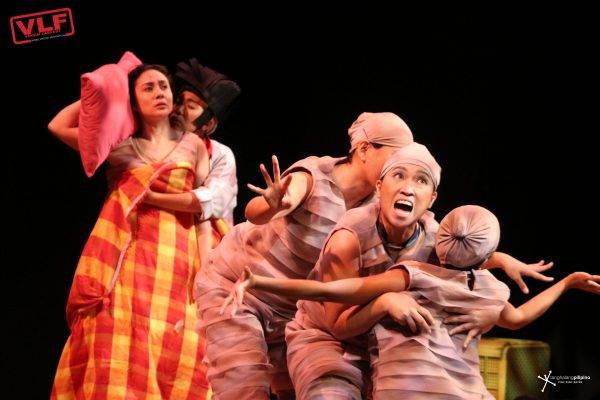 It’s these silences that I was missing in the other plays. Works such as Walang Bago sa Dulang Ito, Anthony Kim Vergara’s Student’s Handbook, and Andrew Bonifacio Clete’s Punks Not Dead rely on depicting how the personal is structural. But there’s also something intensely physical in all of these. In Student’s Handbook, where Foucault’s disciplinary eye is hard at work, four student-characters perform penance for the body’s violations. Punks Not Dead translates the times’ frustrations and anxieties into exaggerated gags around the tattooed body. In Walang Bago, trauma surfaces as shame that is disconcertingly physical and verbal: groping; an undressing that appears like an outer skin shedding; attached nipples and body hair that inflate the shame of exposure; and the humiliations of testimony imagined as a loud, overbearing boxing match.

What’s striking in Walang Bago is how it transposes the drama of the shamed body into a millipede’s world, a continuous shuttling that was wonderfully sustained by an all-woman cast. But the very structure of the text, which asks the character Hija—and hence, us—to re-enact her rape, and go through the motions of trauma’s mess, inadvertently subjects women to re-shaming. At the end, there’s a video of theatre-makers parroting anti-woman sentiments that dismiss the gravity of harassment. Why this faith in mimicry? I’m reminded of how queer theorist Eve Sedgwick describes paranoid reading, an angle of critique that is habitually mimetic². It performs what it condemns.

The applause at the end of Punks Not Dead haunts me more than Huling Haraya’s ambiguous ending. Whereas the latter crafts an opening, an opportunity for imagination and social life, the former signals a deadening finality. Its critique is a cop-out: The hypermasculine policeman shoots the tattooed mother and teacher, a kind of reverse punchline in a work that recycles today’s topical issues. VLF 17 tells me there might be more of these in the coming years. In a climate of disinformation, I get the palpable sense that theatre would consider topicality as its ethical responsibility. But how might we approach the ethics of representation? I’m trying to question the currency of shock and the certainties of narrative. When death and harassment are real wounds, there’s so much promise for experimental theatre to create a gap in the telling, to leave more room for silence in all its provocations.

The Virgin Labfest was established in 2005 and is a festival of plays from emerging playwrights. It is held annually at the Cultural Center of the Philippines (CCP). This year’s festival took place from 15 – 26 June 2022. 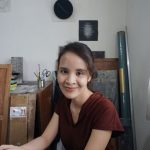 Pristine L. de Leon is an art critic, researcher, and educator based in Manila. She lectures on art, writing, and collaboration at the Fine Arts Department of the Ateneo de Manila University. Since receiving the Purita Kalaw-Ledesma prize for art criticism in 2016, she has written reviews and features on visual art and theatre for The Philippine Star. Her research on public art in the Philippines was published in the journal Southeast of Now and was supported by the Emerging Writers Fellowship program. Currently working towards a master’s degree in Art Studies at the University of the Philippines, she researches and writes around space, site, tactility, and participatory practices.