Garden Uprooted is a performance work drawing from nature as the source, a collaboration with The Philharmonic Orchestra Singapore and The Arts Fission Company.

Subtle tonalities slowly seep into the theatre, and contradicting erratic yet fluid movements in space and time. Throughout Garden Uprooted is nature-inspired music by acclaimed Japanese composer Toru Takemitsu. His compositions transform elements of the Japanese garden, his primary influence, drawing from the belief that humans are inextricably linked to their surroundings.

Each composition is a different garden; the corresponding musical elements interweave with physical characteristics of rhythmical patterns and principles of nature. Takemitsu’s process transforms the clusters of sand, the weight of rocks and time-cycles of the growth of grass and flowers into musical notations.

As Dr. Ruth Rodrigues writes in The Necessary Paradox of Takemitsu’s Music, “Takemitsu dedicated many works to the subject of trees and perceived them to be graceful and dauntless, where their growth from within develops in two directions: roots below, branches and leaves above. Takemitsu felt that trees transformed time into space. Works such as Tree Line and Rain Tree are examples Takemitsu’s dedication to trees.” Both songs are played in the last two scenes of Garden Uprooted. 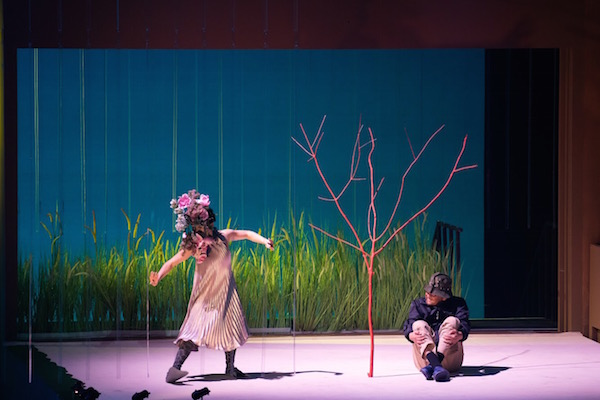 An enchanted garden is created within the Esplanade Theatre through the multi-sensory. A garden that cannot be touched or seen, yet permeates through skin as the orchestra holds and fills the space to create a delicate introduction as the sound softly rises; one would barely notice it if they were not listening. The dancers slowly float their way through, activating the empty spaces on stage with large pieces of silk cloth that ebb and flow, creating a spatial expression that amplifies the soft strength of the subtle soundscape of Takemitsu’s Between Tides.

In between scenes, a gardener in search of the perfect soil comes in and out in a pedestrian stride. He seems to symbolise the migratory path, with the specific imagery of the gardener carrying a large red bare tree on his shoulder, depicting struggle, slowness, travel, direction, and pathway by the simple daily gestures of walking and passing through.

In scene two, on an elevated area at the top of the steps is a domestic setting with a couple in communication, dressed casually, contrasting the grandeur of the orchestra within the frame. Dancers Edwin Wee and Rachel Lum give the sense of a living room conversation, as articulated through sharp yet supple movements as they dance to Nostalghia by Takemitsu. Our eyes are drawn towards the left, as a row of sweepers come in, performed by an intergenerational cast, continuing the sense of a domestic space.

In scene three, a dreamy and fantasised aesthetic utopia is depicted as dancer Yau Ka Hei wears a mask of ornate flowers, her legs and feet with gills and scales, almost like she belongs in the ocean. She penetrates the space with sharp-edged, dynamic and quick movements.

Fellow flower genies come into the space; the personas of each dancer dissolve, as they wear headpieces of flamboyant flowers. Hues that catch – a contrast to the composition throughout the piece. The dancers call the attention and distraction of the audience. Similarly, in our urban pace, we are filled with sensorial overload, requiring information to regularly pass through the nervous system.

In the enchantment of eternity that nature offers, Takemitsu’s music demands a slow and sleepy sense of deep silence. Quick and cutting interruptions by the dancers are almost a reminder of responsibility and upheaval that feels familiar. 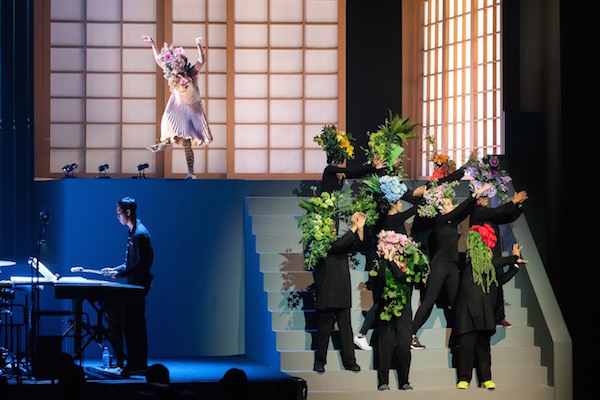 Arts Fission worked with an intergenerational cast of both vivacious young contemporary dancers from LASALLE College of the Arts as well as expressive and creative senior performers from various Senior Activity Centers around Singapore such as TOUCH@Geylang Bahru and AMKFSC COMNET@Rivervale Crescent.

Some of the senior performers are active gardeners who are given the platform to express their creativity through dance. Jahrah Bte Wahab, one of the performers from COMNET Senior Services said, “When we dance we become the flowers in the garden.” They translate their affinity with plants and the solace and serenity that nature provides, through the sensitivity of movement that allows oneself to find nature on an embodied level: nature as found from within. Inevitably, the scenes being performed did require one to be slow and patient, which is vital when working in the garden.

Having been given a voice on a platform such as the Esplanade not only helps to develop social skills by working on an inter-generational spectrum that bridges gaps, but also creates transformative psychological effects for senior performers, young dance artists and audiences, allowing expression to take different forms and aesthetics, rippling a conversation on crossing generations and abilities.

At any given moment, the spatial composition is in balance: the orchestra creating the structural base that fills the theatre, the dancers that move through the textures of tonality, the senior performers collectively energising the stage in a dignified yet gentle manner.

As choreographer and artistic director of The Arts Fission Company, Angela Liong expresses, “The drawn tempo of the music peppered with silent intervals that seem to linger to no end. I imagine that his way of showing us what eternity would have sounded like.”

The narrative interrogates disruptions of the diaspora, confronting migratory responses, cloudy nostalgia and ephemeral ideas of origin as a felt sense, as sound, as connection, or a relationship, rather than a physical and tangible place.

It is difficult in contemporary times to accept a slow and quiet stride as seen and felt within Garden Uprooted, being, as we are, faced with constant stimulation, distraction, and information. Takemitsu’s compositions hold spaces of nothing as the energy of time: continuous, without an end or beginning.

It is in that expanse of listening where we can hear what is not being said, the in-between spaces in sentences that allow words to flow freely. Nature requires one to be silent, to receive, and to listen, sometimes to nothing.

Guest Contributor Chloe Chotrani is a movement artist and writer based in Singapore. Her embodied research is oriented towards her ancestry, eco-feminism and the movement landscape of South/east Asia and the Diaspora. When she is not dancing or writing, she bridges art and ecology through permaculture by building and tending to garden installations around the city with Cultivate Central. 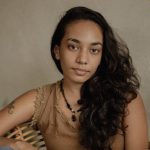