Tucked in Queenstown Residence Committee Centre is a heartfelt homage to Tanglin Halt and the nearby Rail Corridor, nexus of human and bird relationals,  collected by Railtrack Songmaps Roosting Post 1. Conceived out of a collaboration, or chorus between artist Lucy Davis, designer Zachary Chan, photographer Kee Ya Ting and sound artist Zai Tang, the exhibition spans two floors that teem with tellings and re-tellings of natureculture stories.

On the first floor is a listening-chamber of birdsongs and voices interfaced by an interactive media installation; the walls glimmer with videos from projector-nests. The second floor contains a new series, Bird People Assemblages, dedicated to the project’s three out of eight key interviewees. Refracting these stories through a prism of forms, they manifest themselves through puppets, books and shadows. Steeped into material, intimate friction of sound and tactility, each re-telling is never selfsame.

Looming over the exhibition is the imminent demolition of Tanglin Halt and redevelopment of the Rail Corridor, the now unexceptional narratives to the city’s steroidal pace of change. Plans from the Selective En-bloc Redevopment Scheme are underway to tear down one of Singapore’s oldest neighbourhoods whereas the Rail Corridor has been placed under the auspices of a masterplan that includes observation decks, light shows and F&B. A capricious give-and-take, in Singapore ministerial parlance.

Amidst these urgencies, Railtrack Songmaps endeavours towards a lightness of disposition. In Davis’ words, it steers away from the “funereal” or the “participatory”.  Aware of the embalming proclivities of natural history and heritage discourse, the project nests itself in the thick of the everyday and coeval to the living rhythms of Tanglin Halt, which inform the timeliness of its presentation, before residents begin to move out next year.

At the same time, the works offer no salvific futures in place of ossified pasts, holding no illusions to the panacea of art in situ. The modest proposal of the project is the attuning of oneself to the largely unremarked magic of birds. Surely, this would not save us—but it might provide flight paths towards imaginations capacious and complex.

Urgency finds the shortest distance between points, the straightest line that hurtles from one appointment to the next. But this was not the experience of the interactive media, carefully arranged by Tang. I was enveloped into its fold of reverberating birdcalls, pulled along a flight path of windings and detours. An avian psychogeography of the vicinity, I drifted between a taxi driver’s ominous affinity with a single owl and a biologist’s explication of bird collisions into buildings, at moments, digressing into “Field Notes” or documents on informal placemaking such as photojournalist Joseph Nair’s portraits of foragers along the Rail Corridor. I sometimes found myself taken along loops, recursively returning to certain stories. Unlike the cartographical map that avails an object of survey, I am oriented instead by mappings without destination, holding open possibilities of being visited.

Indispensible to following the “Songmap” are practices of listening. The bird-stories come together in a fugue of contradictions, drawn from residents, nature activists and biologists, alongside bird poachers and caged bird hobbyists. Listening to these polyphonic textures was to account for both the harmonies and dissonance—not all naturecultures are easy to love, and yet to impose a moral taxonomy is equally fraught.

From the practice of sounding out human and nonhuman voices comes mimicry. Examples of this interplay between the sonic repertoires of humans and birds abound: from onomatopoeic naming of birds in Malay (such as the pekaka, or kingfisher) to the Malay bird pantuns collected by playwright Alfian Sa’at. Much like birds in competitive improvisation or dialogue, they are traditionally performed back and forth between two performers. There is also much humour in these interspecies crossings. The title of one “Bird People” portraits draws from interviewee Ow Yong Sue Lin’s refrain: “how did it all Sta aaart?”, resounding the oriole’s birdcall with the rise and drag of her voice. Here, interpretation is taken on a walk, out of the fortifications of human intelligibility, through felicitous crossings into the terrains of human-bird becomings.

Throughout all of this, images of birds remain elusive. Railtrack Songmaps attempts at the visual ecology of birds beyond the predatorial overtones of colonial sovereignty and competitive machismo within the online community of local bird photographers. Rather than images of birds petrified in crystalline high-definition, the gratification of ocular capture is delayed through their present-absences and absented presences, flickering alongside the interactive media. One method in the process, Avian Web, Sunshadow Re-Wild, saw the handcutting of hundreds of printed frames from found internet videos of birds, and re-animated in situ, whereas another involved casting shadows of OHP transparency bird puppets filtered by sunlight, both practices in releasing birds from a domesticating gaze.

Ki ki ki kii, one of the Bird People Assemblages spurned out of the repository of collected bird stories, is a dream-diagram in homage to Tanglin Halt resident Esther Kamala and her effusive companionship with her nine parakeets, with dreams of her lost parrot, Rebecca, loosely threaded to contested ecological collaborations from the Malaku Islands. Gliding through the suspended profusion of puppets with their quivering shadows splayed across wall and ceiling, figures of birds coalesce into legibility, sometimes dissolving back into the ground much like optical puzzles. Before partial, perspectival and shuttering views, ways of looking at birds looked back at itself, bringing to question itself as a seamless passage of knowing.

A cluster of loose threads referencing the bird’s plumage, strands drooping like aerial roots, knotted lichen – Railtrack Songmaps and its plotlines will continue to stray, tangle and return much like a particoloured bird, which for an instant, offers a glimpse, snatches of song—how do we attend to such unconditional generosity?

Guest Contributor Marcus Yee is an artist and writer from Singapore. His artistic research takes an interest in materialisms and their contradictions. He has participated in group shows in LUMA Westbau, Zürich; BANK Gallery, Shanghai; and in Singapore. He is a regular contributor to ArtAsiaPacfic and ArtsEquator and maintains an art-writing blog, Right Afters. 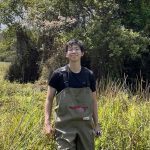