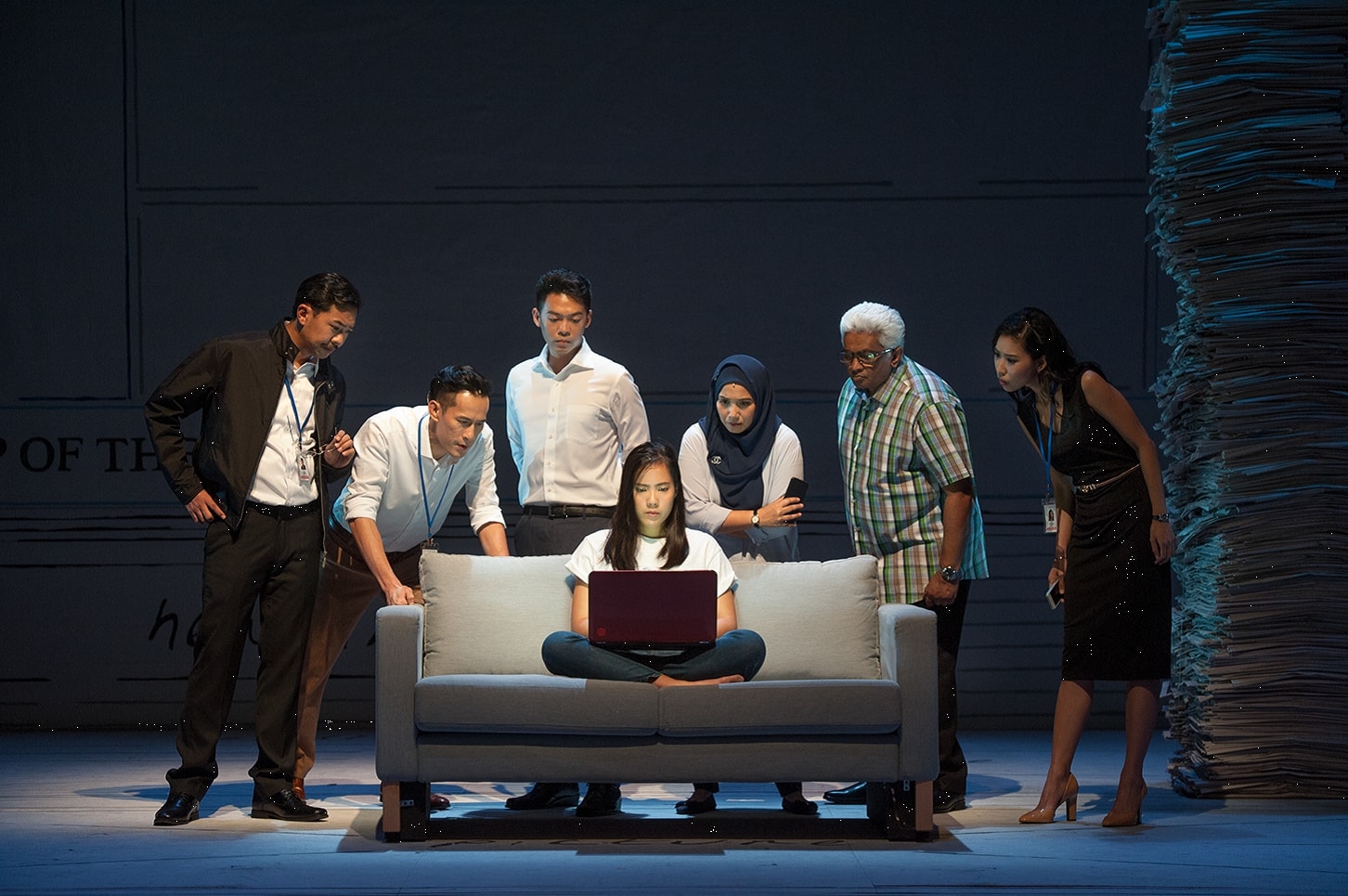 “My concern now is how to nurture the critical sensitivity of the playwright, and for that matter theatre and literature and all the other arts. Because I think we have a way of life that somehow massages you in a way so comfortable that you tend to forget that before they started to massage you, you had some ideas, some observations, and after some massaging you somehow forget things.

I left The Straits Times in 2016, but some people still think I’m with the newspaper. The name sticks to you. It becomes synonymous with everything you do. Unless you’re a brand name, reporters at the monolith often become interchangeable, partly because of the high turnover rate and the frequent rotations. I joined when I was 18 years old – I’d applied for an internship at the Life desk (covering lifestyle, arts and culture) shortly after my ‘A’-levels. In the intervening university years before I graduated and became a full-time reporter, I returned for internships at other desks, where my editors came to the conclusion that I was terrible at hard news and much better at features, so they sent me back to Life, my home for just over six years.

But something else lingers with you at the national broadsheet. I couldn’t quite name it at first, but the longer you stay, the larger it grows, massaging you into quiet deference and back into place as a cog in a rigid system. I recently returned to The Straits Times for the first and only time since I’d left. As I walked down Toa Payoh North towards the glass facade of my former workplace, my palms began to sweat and I could feel my heart rattling within my chest. Press Gang’s startlingly accurate production design and costuming had the same effect of painful recognition and low-grade dread. That intimidatingly long conference room desk, the black windbreakers that are a sort of uniform in the chilly office, the high-backed swivel chairs, the plastic yellow canteen ones, the gossipy late morning and late afternoon “tea breaks” where small islands of reporters exchange notes…

The Straits Times has a large open-plan office – editors are often down in the trenches with their reporters, which means communication is direct and each can find the other easily for urgent assignments, debriefs after interviews and re-angling stories. The newsroom is littered with what we call “the stacks”: stacks and stacks of neatly bound newspapers where staff can consult previous editions of the news from across Singapore Press Holdings’ multilingual stable of papers – not unlike set designer Chris Chua’s newspaper tower of Pisa arranged on the stage of Lasalle’s Singapore Airlines theatre. Press Gang introduces a stripped down but deeply evocative version of the newsroom, where in real life there’s a mezzanine level where the senior editors have their own private offices. They’re rarely up there unless they desire some sort of privacy, or need to discuss issues with their staff away from hundreds of pricked ears on the ground. You get to these offices via prominent spiral staircases, and a reporter ascending and descending the stairs often means one of three things has happened: (a) they’ve been promoted, (b) they’ve been let go, or (c) they possess some work-related information too juicy to reveal in public.

Press Gang opens with (c). An alleged slap has transpired between the Prime Minister’s son and the Deputy Prime Minister in alt-universe Singapore, and the upper rungs of the Singapore Times are panicking over what to conceal and what to reveal. There’s newcomer Chua Kin Jek (Benjamin Chow), a political desk journalist freshly parachuted in from a high-flying career at the Ministry of Foreign Affairs, stodgy political desk editor Christopher Rozario (Shane Mardjuki) who is squarely pro-establishment, and sharp, long-suffering news desk editor Aminah Sulaiman (Oniatta Effendi) who seems to have run up against the newspaper’s glass ceiling. The newspaper’s editor in chief, Francis, is put on indefinite suspension after an article walking the thin line of criticism and defamation, and these three characters find themselves in the centre of both a professional and political power struggle, orbited by a chorus of other characters: the abrasive Tan Tong Soon (Rei Poh), who might be a spy; the newsroom Kardashian and popular columnist Kerin Khoo (Amanda Tee) who revels in her flock of “hate-reading” readers; the rockstar independent journalist Mariam Wong (Yap Yi Kai) who left to join “the dark side”; and Bhavan Muthu (T. Sasitharan, also a former ST journalist), a veteran on the brink of retirement who may have a little more spark in him yet.

Press Gang is a talky, declamatory news drama that reveals the inner workings of the news machinery, and also attempts to dramatise static portions of the news day that, in real life, would probably have taken place over instant messaging or email. The heart of the play is the protracted editorial indecision to publish something that, amusingly, everyone already knows. (As an analogy, one can only imagine how The Straits Times made decisions in its coverage of the Oxley Road saga.) Unfortunately, portraying media paralysis on stage can also be very dramatically inert. Films such as Spotlight (2015) or The Post (2017) have also presented surgical examinations of a newspaper’s decision to go to print, but Press Gang isn’t exposing decades of pedophilic priests or Vietnam War state secrets. It’s also set against Singapore’s complicated press history, which in itself requires some explaining. While a slap carries gleeful satirical weight, the sting doesn’t last beyond a few seconds and can’t sustain the more serious, analytical half of the drama’s momentum – as much as director Ivan Heng tries to prop up the action. Then again, it’s hard to think of which other political scenario the production might have gotten away with under current licensing and funding guidelines unless it was so deliberately far-fetched.

It feels as though Heng might have borrowed some staging devices from other wildly successful Wild Rice productions, including the the flashy final scene reveals from socio-political documentary plays Cooling Off Day (2011) and Cook a Pot of Curry (2013), and the movement interludes of Hotel (2015). In Press Gang, however, these segments functioned more as a literal way to liven the stage with action in-between long scenes of people sitting and talking. The performers also mostly speak to each other in a stilted, formal English (including the exclamation “nary a squeak!”) – which produced in me a sort of disorienting cognitive dissonance where the environs of the newsroom and the staging and content of each encounter are blindingly accurate, but the stiff language is entirely removed from how anyone in the Singaporean news industry might actually speak, or how my colleagues and editors have ever spoken to one another. Then there’s some contradictory character development that drastically lowers the emotional stakes: a journalist presented as an intelligent, careful worker makes an unbelievable rookie mistake in order for a key plot point to take place; I understand the need for a blank-slate Kin Jek as a conduit to introduce audiences to the newsroom, but this is swallowed up by his puzzling naivete, uncharacteristic of a seasoned civil servant accustomed to dealing with the state.

Press Gang has so much to say that it tries to say everything, and shout it incredibly loudly – as if every line were a headline and a nut graf. But, but. Despite these structural and dramatic problems, I couldn’t help but feel a deep admiration at Press Gang as a tell-all that marries Tan’s love of satire with his real-life experiences. Even if these two elements are roughly sutured together, the play is stuffed with urgent and necessary discussions. Tan pulls back the veil on the truths and assumptions made about what’s often been referred to as the “government mouthpiece” in a play that’s deeply faithful to its source, if a little too pleased with its satirised composite characters, drawn from actual people. Press Gang works as a sort of ST 101, slipping in reveals about advertising revenue, the murk of OB markers, the codependent relationship between the state and an ostensibly private news corporation, and the newsroom territorialism as beat reporters, younger upstarts and long-time editors scuffle over scoops. I found myself yanked back in time, reliving arguments with editors over “sensitive” op-eds. I recalled whispers of high-level phone calls to editors, or rumours about lines mysteriously excised from articles in print the morning after.

What Press Gang pinpoints is the more chilling fact that censorship often isn’t brutal – it’s banal. At Life, I was more insulated from the newspaper’s political machinations, but the climate of quiet pressure and mounting burnout seeped into every corner of the newsroom. The paper’s reputation for toeing the line was often accepted with shrugged resignation – and this often became a crutch, putting a lid on reporters who may have started out wanting to colour outside the lines. Journalists and middle-management editors would sometimes self-police before a supposedly ‘sensitive’ article even began to move up the rungs to be evaluated by higher-level staff. The institution became an easy target of blame, which meant that reporters (myself included) could more easily absolve themselves of responsibility for continued self-censorship.

Press Gang asks – does journalism even matter any more? Particularly in a country where this sort of media paralysis is absurdly commonplace, courtesy of the the Newspaper and Printing Presses Act of 1974 which has defanged the mainstream media and deeply handicapped the independent media. Can change ever take place in a newsroom where troublemakers are shunted off the staff or quickly reshuffled to more benign positions, like “chief marketing officer”? Can Singapore ever regain its fourth estate – or perhaps the theatre has taken its place?

This isn’t the first time that Tan, a researcher and writer, has commented on the insidious nature of censorship in Singapore or critiqued its dehumanising bureaucracy, something he’s tackled potently with Fear of Writing (2011) and satirised in The Lady of Soul and Her Ultimate ‘S’ Machine (1993). Tan has had plenty of time to observe The Straits Times; he was on staff in various roles throughout the late 1980s to the early 2000s. Social media arrived shortly after, as did the demand for print journalists to become round-the-clock Swiss Army knives who could chase their stories, write a first-cut online story, write a print story, live tweet, and take photographs and videos all at once. It has become almost impossible for careful and conscientious editing to sustain itself in an impossibly fast and relentless news cycle. An emotionally charged retrenchment exercise last year, described by my former colleagues as a “bloodbath” and “massacre”, is also endemic of a larger decline of the industry worldwide.

When I was in primary school, I read a book that offered a fun personality quiz to shortlist the professions its young readership might most enjoy. The book proclaimed that I ought to be a journalist. My eleven-year-old self was deliriously excited by the prospect. Over the following years and throughout secondary school, I began to cut out newspaper articles I thought were well written, including many by a respected arts writer who would eventually become my supervisor. We’re both no longer with the newspaper, although I often wonder, with a guilty pang, what might have been if both of us had stayed. In the final moments of Press Gang, a character lingers on stage carrying a cardboard box, an initial flash of confidence fading to uncertainty on their face. I still carry that guilt in my cardboard box, the guilt of every Singaporean reporter afraid of a defamation suit, afraid of authority, afraid that before the system massaged them they had some ideas, some observations, afraid that they’ve forgotten.

Press Gang by Wild Rice ran from 5 to 15 July as part of the Singapore Theatre Festival. This response is based on the performance on 13 July, 7.30pm.