Halfway through The Finger Players’ trippy, darkly comic Citizen Dog, I pause to consider the philosopher Zhuangzi’s anecdote on how we construct our realities:

There’s metempsychosis aplenty in the horrifically funny Citizen Dog, that supposed transmigration of the soul into a new body (whether animal or human) upon death, and on waking these characters are never quite sure which world they’re inhabiting – the surreal world of Kafkaesque bureaucracy above, or the supernatural world of ghosts and spirits below. The two symbiotic narrative arcs of Citizen Dog, unfolding in tandem with each other, are both man and butterfly. How does the writer create his universe as he writes it? How does his universe then begin to shape him?

Oliver Chong, who directed and co-wrote Citizen Dog, has conjured up an extraordinarily sharp and textured work inspired by Pu Songling’s Liaozhai Zhiyi, the 18th-century collection of more than five hundred tales of the supernatural also known as Strange Stories from a Chinese Studio. The Chinese-language play cleverly maps Pu’s critique of Qing Dynasty feudalism, imperial examinations and social class onto contemporary issues of bureaucracy, displacement and land ownership in Singapore. There’s an echo of Chong’s first collaboration with peer practitioner Liu Xiaoyi (who co-wrote and also stars in Citizen Dog) in 2013’s Citizen Pig, where the duo took on rental issues in Singapore. But Citizen Pig is a wisp of a tale compared to the ambition and stacked commentary of Citizen Dog – possibly Chong’s most polished production to date and one of those instant repertory classics worth repeating.

Citizen Dog tells two ouroboric stories occupying the same apartment – “same same but different” the way in which the floor plans of flats in Singapore tend to be exactly alike. The same tessellated floor tiles extend to the flat’s furniture, and the characters are boxed in by the skeleton of the flat. Chong drew from current public housing lease expiry fears, particularly this story of almost 200 terrace houses in Geylang approaching their lease expiry date in 2020, a situation that looks set to become more frequent as more public housing estates in Singapore hurtle towards the end of their 99-year leases and return to the state. A depleting moon is suspended above the set, marking the passage of time. Centre stage in the apartment is the small statue of a fox fairy, a source of superstition and intrigue throughout the play.

In the first story, the girlish ingenue Xiaocui (Jo Kwek) is forced to leave the home her late father bequeathed her after a corrupt official from the “Land Authority Bureau”, Wang Tai Chang (Alvin Chiam), arrives at her door to inform her that the lease for the house is expiring. He offers a sketchy solution to her homelessness – move into his flat and tutor his intellectually-challenged 30-something son, Wang Yuan Feng (Liu Xiaoyi), who hasn’t managed to pass his high school examinations in decades. A giggly Xiaocui agrees – she only finds out a little later that sexual favours are involved – on the condition that her White Dog comes along too. The large dog is puppeteered bunraku-style by three performers (Ann Lek, Trey Ho and Darren Guo, who all masterfully convey the dog’s personality), bringing to mind the three furies of Ancient Greek theatre who sometimes act as a play’s chorus. The endearing White Dog straddles both stories as observer and narrator, commenting on the action and trotting around the set, barking at and sniffing people inappropriately, eating anything it can get its paws on and, at one point, swearing enough to make even the saltiest sailor blush.

Like a series of nested dolls, the second story swallows the first – we realise that Xiaocui’s tale has been conjured up in the mind of the old literary hermit Mr Pu (a proxy for Liaozhai writer Pu Songling, also played by Liu Xiaoyi) as he works on writing a series of stories in his home, which bears an uncanny resemblance to Xiaocui’s flat. We begin to feel a creeping sense of deja vu. A corrupt land authority official (also Alvin Chiam) raps on Mr Pu’s door, forcing him to sign eviction papers, which are once again destroyed by the White Dog as they were in Xiaocui’s tale. Conversations and snippets of dialogue from the first story are repeated with small adjustments for this new context. This time, however, the situation is interrupted by a jezebel of a masseuse, Ah Xiu (a delightful Li Xie playing it up to the hilt), who proposes that she rent out Mr Pu’s extra bedroom for a month to give her customers their “happy endings” so that he can make some money before he’s evicted.

As the two stories intertwine, slipping between Mr Pu’s reality and his literary imagination, the churning undertow of the supernatural begins to make its way to the surface in the form of the two women, Xiaocui and Ah Xiu, even if the fuzzy aura of magic around them is never fully explained. Both women have a vaguely southwestern Chinese accent, the sort of thick, coarsely accented Mandarin that is often stereotypically associated with blue-collar migrants from mainland China. This is played for laughs, but there’s a purposefulness behind the women’s linguistic caricaturisation. They’re immediately marked as the aliens in the play’s alt-Singapore universe: mysterious, sensual and unattainable. Through them, Chong subtly examines the local-foreigner divide and the kinds of implicit biases we enact between the two. Citizen Dog is rife with hilariously stylised sex scenes – sex that is often contractual or wielded as part of a power play as the disenfranchised Xiaocui and Ah Xiu attempt to control their own destinies. Even as men try to write or dream women in and out of existence in Citizen Dog, the women fight back, matching sexual violence with other kinds of violence in order to elevate their futures.

Citizen Dog is full of deliciously grotesque casual violence played for maximum comic effect: chests are ripped open, flesh is carved from limbs, intestines unspool from a disembowelment: whether in the dream world or the real world, the threat of violence and dark humour hangs heavy over the stage. It’s a violence that is relentless and never resolved, and the White Dog travels through each scene like a sort of canine id – zero filter, all animal instinct – nagging at the other characters’ egos and super-egos. Are we the dog moving through the murk between the dream world and the real one, helpless to intervene? It’s a wonderful narrative conceit, and through the White Dog’s eyes we see cycles of seduction, violence and attempts to escape the drudgery of everyday life repeat and repeat. The tragedy in one story gives birth to the tragedy in the other, regardless of which story seems to have come first in the linear march of time.

Liu and Chong’s sinuous script, so rich in puns and wordplay, walks the knife’s edge of humour and tragedy: to have a heart-to-heart conversation, or 交心 (jiao xin), could also literally mean “to exchange hearts”, and there’s a morbidly funny scene in which hearts are in fact exchanged. Their lyrical text is matched by sound designer and composer Darren Ng’s astonishing live soundtrack to the play. He plays a homemade electroacoustic instrument that provides a musical stream of burbling unease, the sense that something misshapen and terrifying lurks beneath the surface of these seemingly benign domestic spaces.

By the end of the production, as the rictus of the waning moon grins down on the set, a show that was deliriously funny turns terribly sad. It’s a gradual transformation, a shift in mood so stealthy, that you only feel the ache after the lights go down. What does this country demand that we surrender of our families and of ourselves? When we’ve emptied ourselves of promises, what remains? I’m sad that this production suffered poor box office sales despite a brief three-day run, and I hope that The Finger Players might be able to resurrect it as an excellent addition to the company’s solid repertoire of plays that combine whimsical charm with a dark underbelly, such as the heartrending Poop or the sumptuous The Book of Living and Dying. Citizen Dog feels like a parable and a cautionary tale for the modern age, delightful and devastating all at once, a world in which a human being may be more fragile than his butterfly counterpart, trapped in a cruel dream of desperation and despair.

Citizen Dog by The Finger Players ran from 8 to 10 June at the Victoria Theatre. This review is based on the performance on 8 June, 8pm. 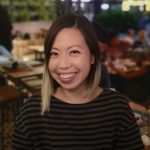