Pichet Klunchun was invited to create an outdoor performance at Minami Ikebukuro Park, a popular hang-out place for families and young people in Tokyo, by the Festival Tokyo 2017. It was an ‘odd’ commission given that Pichet Klunchun is known internationally, as a choreographer and dancer, for his deconstruction of classical Thai dance, the khon, rather than for site-specific work.

But that was perhaps the point. It became a platform for him to break out of everything he had done and been known for. He took on the role of director, for the first time, to produce a pop dance drama with a big cast of 20 professionally-trained dancers and 20 untrained actors recruited from the community, titled Toky Toki Saru (“Tokyo Time Monkeys”). He had seemingly abandoned the traditional by using untrained performers, popular culture and everyday life, including having a DJ, Rory Breaker-Morant, to spin club music live. Only seemingly, because his use of the traditional was embedded in the fibre of the performance. It was present in the use of choreography and the body for story-telling, together with music, costumes and full head masks. 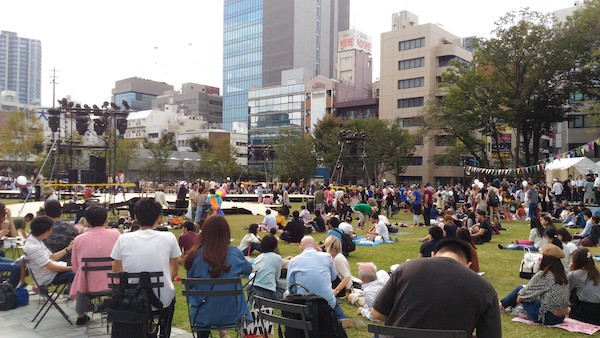 Like the khon’s Ramakien repertoire, Toky Toki Saru treated the age-old ‘good prevailing over bad’ theme but in a way that made it feel cool and hip. It also referenced the Buddhist concept of the ‘monkey’ mind, the restless and harmful nature of the untrained, unskilful human mind, in telling a compelling story of a strange encounter between Humans and Monkeys. When the Monkeys tried to infect and transform the Humans by giving them their Monkey heads, the Humans were saved by a woman symbolically dressed in white who had been giving out white balloons to people. So beyond capturing the feel-good mood required of a festival opening show, the performance was simultaneously an entertaining show for all ages, a social drama with a commentary about society (which is as relevant to Tokyo as to other cities), a pop parable, and also a kind of public ritual to invoke and quell the Monkeys in our midst through a rite of enactment.

The show started casually with the 20 dancers, dressed in gorgeous, fantastic Monkey costumes and full head masks (designed by Piyaporn Bhongse-Tong), appearing in the park to play with the people there, dancing, posturing, posing for shots, and breaking white balloons. In groups of 5, the dancers also took turns on the stage to show off their distinctive moves (created by choreographers from Thailand, Cambodia, Indonesia and Hong Kong: Padung Jumpan, Rady Nget, Alisa Soelaeman, Janet Wu Wing Yan.) 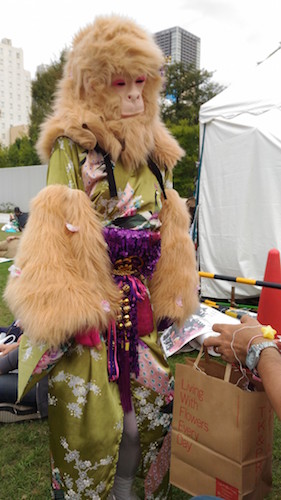 This low-key Monkey business went on for about 30 or 40 minutes. There was a sense of amusement when the Monkeys (seemingly) managed to coax some people to go onstage as their partners, including a policeman who had to put away his walkie-talkie. The Monkeys got them to play with ropes as dance-inducing club music blared and the people watched in between conversations, minding kids, drinking beer and eating, etc.

Amusement turned to suspense when the Monkeys transferred their head masks onto their Human partners and ran off to cavort happily offstage. From here, a chain of events unfolded which were riveting in their development and unexpected turns, beginning with the dramatic transformation of ordinary people (chosen for their inclusive representation of Tokyo society) into actors and characters whose actions onstage took on a larger symbolic function. 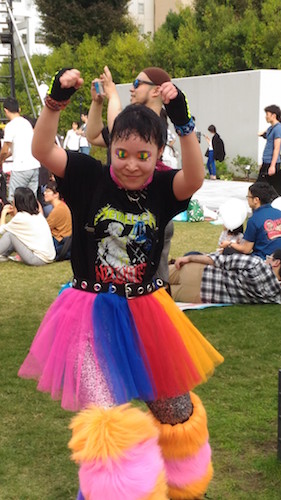 The sight of Monkey heads on people wearing such familiar clothing as a business suit, dress, kimono and police uniform looked bizarre, ‘wrong’ and disturbing. The masks began to affect the Humans in getting them to lose their former restrain, and things looked like getting out of hand when the ‘white balloons’ woman appeared. Her presence drew the Monkeys back to the stage and broke the spell for the Humans who returned the masks to these “bad animals” (to use a term from one of the songs). The Monkeys and Humans separated into two groups, each headed by their own ‘Police’ leader. The Police Human subdued his aggressive Monkey counterpart and taught him how to salute and how to behave. Following his example, the other Humans began taming or training their Monkeys. For example, the Business Human taught his Monkey how to sit, kneel and bow. The Humans’ actions struck me as attempts at socialisation and this made me feel uncomfortable, especially with the actions of the Human Police, even though I knew he was supposed to be a ‘good cop’. The Humans then left to merge back with the audience from whence they had come, leaving the Monkeys alone onstage as a song came on with a melody and lyrics that were aptly ‘emo’: “You know, I can’t take away your pain / And I know it’ll never be the same / All I want to do is explain / That I wouldn’t change a thing / If we did it all again…” 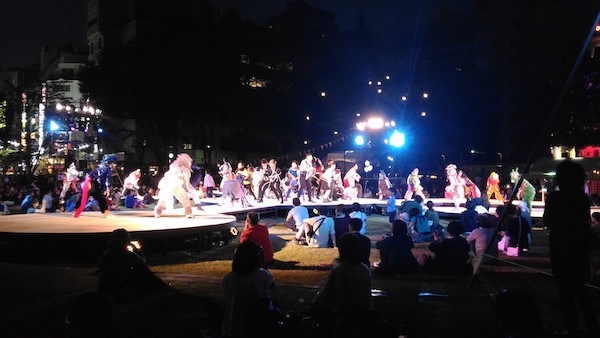 Toky Toki Saru was outstanding as a site-specific performance which was made to suit and withstand the natural conditions of the site. Since it was happening in ‘their’ park, the audience was allowed to do whatever they liked during the performance. This included children climbing onto the stage to stare, touch, sit, or walk about, while one woman got up to dance. The show ran as one long sustained performance for nearly 90 minutes, unperturbed by any and all distractions. And it was as gripping in broad daylight as it was under special stage lighting in the evening.

Toky Toki Saru was a performance conceived and directed by Pichet Klunchun as part of Festival Tokyo 2017 that took place at Minami Ikebukuro Park on 30 September at 5pm and 1 October at 1pm.

Leow Puay Tin is a playwright and text curator who collaborates with directors, actors, and other practitioners in making reality-based performance works, besides creating her own texts for performance. She also teaches at the School of Arts in Sunway University in Malaysia.