Pathey Nimidam 2017 opens up to a simple bare-bones theatre, plunged in darkness with a few blocks embellished with light, waiting for creativity and spark to bring them alive. From here stemmed eight different plays each unfolding within ten minutes. These offerings ran over a three-day period toward the end of September as a “celebration of the Tamil language”, and opened with host company Ravindran Drama Group’s Kadal Karai.

Kadal Karai was about a mother battling the grief from the loss of her child. The story in itself was heartwrenching, and the narrative was beautifully written with rich imagery and poetic wisdom. While the text sounded rich and poetic, the actors’ choices did not embody the depth of the words. The child actress was very cute, but she mumbled over a fair bit of her lines. There’s something to be said about the charm of child actors, where everything they say or do can elicit an instinctive protective and affirmative response of laughter or “aww”. However, cute is not enough. She has to be heard for her words to make impact. 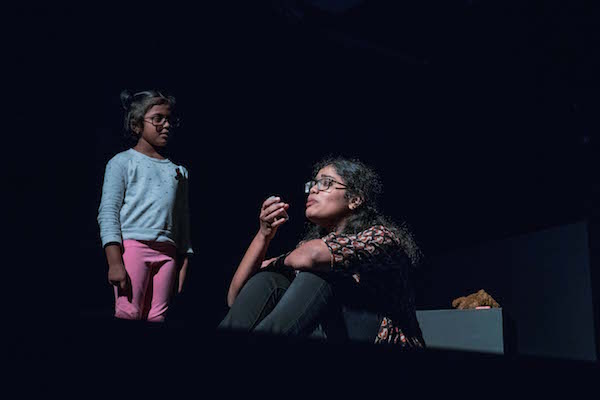 When I could hear her though, it made for interesting conversation between herself and her Mother. It was a quiet play that cycled through a mother’s grief, coming back full circle when the spirit of the girl returns to blame the mother for her death. Such is grief, and perhaps that is why it is named Kadal Karai (“seashore”): it reminds you of what you had, what you’ve lost and what will never return. Another portion of the play I found amusing was the young girl displaying her skilled use of Facebook, at just eight years old! It makes one wonder how much harder the Mother would have had to grieve considering her daughter continues to live on through an internet profile she was so prolific in upkeeping. Grief compounded by the presence of imperishable biodata means your loss is recorded forever, and should the Facebook Memory feature strike, you will relive your loss all over again.

The errant and notorious Taxi Driver returns for a second installment in this year’s Change Shift 2! I rather liked the congruent and careful palette in various shades of red that tied in rather wonderfully with the predominantly black set. Careful attention was also paid to lighting design, which complemented the tight space and the actors’ restricted movements within the setting of a small taxi cab. The one thing I had a real issue with was Drake Lim’s attempt at speaking Tamil. While it is commendable for a speaker to attempt an entire one act play in a language that is not his native tongue, it made me wonder: is Tamil still Tamil if it isn’t spoken properly? Granted, broken English is still English, but the premise of that lies within the perimeters that the words recognisably belong to a language, even if its syntax or grammar structure is lost. It has to be, at the very least, intelligible and identifiable. For example, if I spoke the words “you ham sex”, it can mean a thousand different things. Ham could’ve been a broken substitution for the word ‘have’ or ‘had’. Or, I could’ve just been raving in my own way about a really sexy leg of ham. The point is, even if you can’t figure out what that meant, you could easily identify that the language I used was English (also, I’m really hungry for that ham right now.) 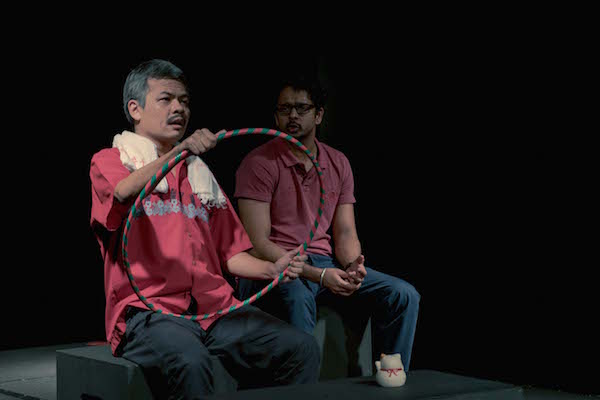 In this case, I felt like Drake Lim’s use of the language barely sounded like Tamil for a significant portion of the play. Identification is one the key markers of language, and if I heard him outside of those doors, I wouldn’t have been able to identify what language he was speaking in. I relied very heavily on the surtitles, and in moments where the surtitles were late to catch up to him or failed to show, I completely lost track of the play. I admire Lim’s attempt, and his characterisation of his Taxi Driver was sweet and likeable. However, his use of the Tamil language was exceedingly less than perfect. For a festival that markets itself as “an invitation to share in the richness and beauty of the Tamil Language”, I was disappointed that not enough attention was paid to the use of the language itself.

In the same vein, what struck me in Rainclouds was also the use of the Tamil language – but in a different manner. I wonder if it was a deliberate choice by the director, or simply the normal speaking habits of the actors. Either way, I really liked the contrasting use of colloquial Tamil and well-spoken Tamil. The back and forth between two different kinds of Tamil sounded like music to my ears. However, the performers’ energy dwindled towards the end of the play and I was unable to hear them towards the end. I preferred last year’s play by the same company, in which the leading male (Aditya Mazumdar) was hilarious and exemplary. As for Aruna Govid, her characterisation left much to be desired and her performance was one-note throughout the play.

Moved by Kaizen was a physical take on divorce. The play began with a less than subtle opener: a resounding voiceover with firm instruction, “Ten things not to say to someone going through a divorce.” The two-person ensemble cycled through all ten reasons manifested in physical movements and dance choreography. While the male performer (Kaykay Nizam) was less than ordinary and bland with his choices, his female counterpart (Karishma Nair) was stunning. She executed every movement with dexterity and alacrity, and at certain times it felt like she bore the weight of the entire play.

A marked complement to her performance was the brilliantly voiced soundscape reminding us of the impending countdown. Pramila Pam’s voiceover was full of emotional nuance and complexity. The penultimate moment was when Nair took off her shackles right before she stared, immovable, at the audience. After all that physical exertion she had poured into the work, it was a still and stirring moment that was well-earned, and my eyes were transfixed on her. I am always a fan of women breaking free from any shackles that inhibit them from reaching anything they desire, and this moment gave me reason to internally cheer. Nair’s strong performance and her beautifully quiet vulnerability echoed this mantra in my head: women need women. Women are more powerful than they realise. Women can take control and not be controlled. 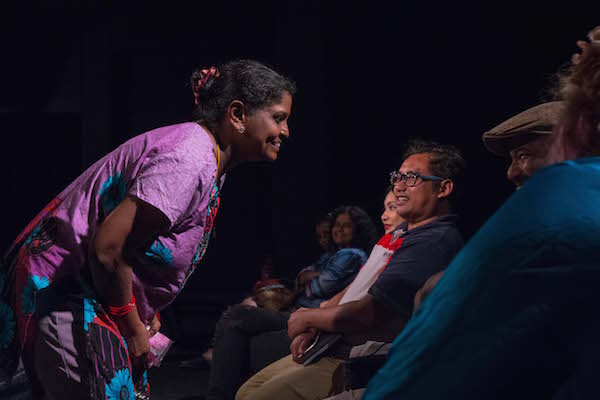 Ulagam Pora Pohke Paary by VER Theatre was the highlight of Pathey Nimidam. Grace Kalaiselvi was absolutely marvelous as a deaf woman (well, for the first two minutes, at least) peddling ready packets of tissues to an unsuspecting audience. Selling her wares, she laments the quality of life and the difficulties of her day. Her attention to detail and interactions with the audience made her one-woman show truly memorable. Kalaiselvi’s main gag was going into the audience from time to time to ask if they would like to purchase packets of tissue from her. In one instance, one man refused politely; when asked why, he just said he had no money. Grace hilariously turned that refusal into a job proposal and got him to sell tissue paper with her. It was an interesting display of psychology, as every other person approached after that gave in to buy something because there was an inherent ‘fear’ that if you didn’t buy something, you might have to risk being asked to help peddle. Kalaiselvi showed an innate ability to keep the audience entertained with her sharp wit and spot-on comedic timing. Ulagam Pora Pohke Paary is definitely a small play with big portability, and I think Kalaiselvi afshould consider the possibility of turning this into a travelling show. I can definitely see this play happening in infinite site specific environments and travelling to other festivals.

It is no easy feat presenting after the high of Kalaiselvi’s piece, but the cast of Refresh held their own, at least for a little while. Raghu Narayanan returns in this piece as one of two lovers sharing a space through technology. The catch? One of them is already attached, and is having an affair. It was a bold storyline, but I felt that the couple did not quite display the heft and gravitas of their situation. I thought that Narayanan really shone in this play as compared to his performance in Change Shift 2. However, the pairing of Narayanan and Ponnamma Devaiah seemed rather odd, and I could not feel any chemistry between them. Their choices of spacing also left me confused at times: I was not sure who or what to focus on because they seemed to be in their own spaces. 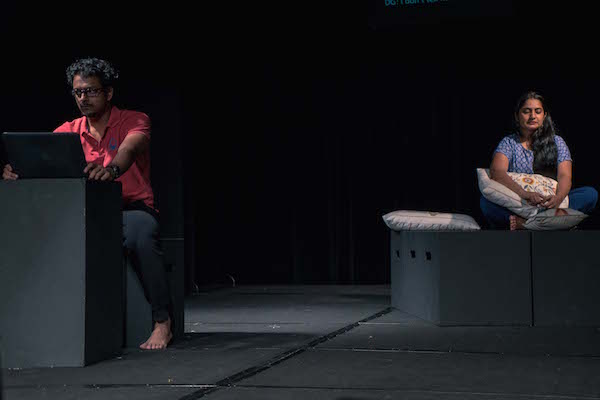 The concept of Susuk by ADI Concept simply puzzled me from beginning to end. It painted the story of someone chasing their desires through dangerous means, only to face dire consequences when she couldn’t follow the rules of engagement. While I understood the text, I could not wrap my head around the staging. The physical montages raced through so fast and left the show feeling unanchored. One moment, I thought I was in a seminar about plastic surgery. Then it jumped to beauty standards, then tests passed on from one generation to the next, and then black magic. Confused? So am I. While I appreciated the conscious efforts made to embrace the text and project it in an almost otherworldly manner, the execution was idealistic and distancing at best.

The finale performance Junkfood by Underground Theatre was a wonderful smack on the lips with burgers, fries, and mayhem on the side. Filled with hilarious stock characters, slapstick comedy and unbelievable situations, the play about a woman who finds a human finger in her food was a wonderful end to the night. The women simply shone in this one, with clever lines by Dew M. Chaiyanara, Sajini’s strong performance, and Pramila Pam’s accentuation, with side splitting punchlines and rap routines. Sasi Kumar complemented the two ladies as the manager, delivering the final punchline that begs the question: what was in the food that got the customer so upset? Was it really a finger? As the manager peers into the food one last time, he reveals a horrified look of realisation and immediately clutches his groin, sending the audience erupting into laughter and concluding the festival. 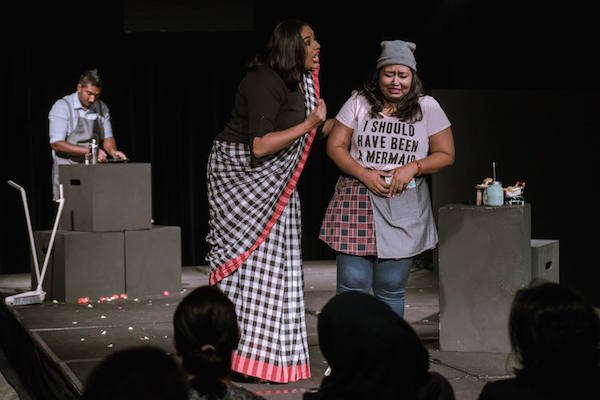 Overall, the festival succeeded in giving the audience a night of variety. I was miffed that we started slightly late and grossly overran. Yes, we have to live a little once in a while, but ending 20 minutes beyond the stipulated time is a bit of a problem. But with the exception of time, this year’s Pathey Nimidam was better than the last. There was a marked improvement with regard to organisation, seating, surtitling, stage structure all the way down to the nifty programme booklets. It is always heartening to see theatre groups working hard to improve the quality of the work they produce, and RDG succeeded in this one.

The offerings in this year’s festival were decent, with some just about alright and some truly exceptional. It is important that theatre has both sides: the bad to improve, reflect upon and grow, and the good, to inspire and celebrate. It was a successful festival that saw some substantial Singaporean Tamil theatre on display, while leaving room for artists emerging and experimenting.

Pathey Nimidam 2017 was presented at Aliwal Arts Centre from 21 – 23 September 2017. Pathey Nimidam began in 2012 as a Tamil theatre competition of short, ten-minute plays and has evolved to become a festival celebrating Tamil theatre.

Guest Contributor Rebekah Sangeetha Dorai is an actor, singer, and voiceover artist based in Singapore. She was last seen in W!ld Rice’s Boeing Boeing (2017), and will perform in Absence Makes the Heart… presented as part of The Vault series by Centre 42, from 28 – 29 October 2017.