If you have ever felt that classical Indian dance is too melodramatic – if you have ever rolled your eyes at a dancer’s fervid abhinaya, or a poem narrator’s extravagant diction – or if you think all the bright drapery, clashing saris, and coloured lights are unbearably gaudy, then Padmini Chettur’s Varnam is the corrective you have been waiting for. By stripping out all the excess of costume, music, movement, and facial expression, this work deconstructs bharatanatyam and returns it in a barely recognisable form. A hand gesture here, a snatch of rhythm there – this minimalist Varnam might make you long for the overstuffed original.

In the duet version of Varnam, performed as part of Jejak Tabi Exchange, curated by Lim How Ngean, Helly Minarty and Akane Nakamura, at Damansara Performing Arts Centre (DPAC) last week, Chettur and her dancer Aditi Sharad Bheda begin, seated on two chairs, clad in monochrome cropped pants and sleeveless tunics. Facing front, they begin to move very slowly. The movements seem inconsequential – pressing a palm to the floor, or arching back, elbows akimbo – but exact. Gradually, in precise synchrony, they introduce recognisable forms – fingertips pursed in the mukula mudra, for example, or splayed in hamsasye.

A phrase emerges: bud hands pull away from each other, splayed fingertips sweep out to the front, then one straight arm reaches out to the right, as the shins in parallel angle to the left. For a moment, the work becomes almost dancey, as the two performers repeat and enrich their phrase, layering it with clever juxtapositions which ricochet between them. But mostly the work proceeds in a sternly minimalist key. Through slow awkward-looking sequences, with a shoulder pressed up to an ear, knees knocking, or hyperextended elbows, the dancers flout the classical aesthetics of shape and line.

A woman’s voice sings the classical Mohamana Varnam text the background; although her voice quavers and sobs with emotion, she seems far away. More immediate is the performers’ flat rendition of the main phrase: “Completely hot for you now am I, my Lord.”

There is an almost comedic mismatch between the slangy choice of words, like a teenager’s first bid at dirty talk, and the deadpan tone of their delivery. But this is clearly no laughing matter; everything in Varnam is deadly serious, and nothing is left to chance. Every look, breath, shift, and word has been scrutinised and arranged to within an inch of its life. Or perhaps beyond life.

There is the sense of a cool, dissecting mind at work in Varnam, but it is missing a beating heart. This makes the work seem merely instrumental, a conceptual stepping stone on the way to something else. The work premiered in 2016 as a film and as a longer version for a larger group of dancers, which may have had greater urgency. Programmed here to precede the second work of the evening, Pichet Klunchun’s I Am A Demon, which is also a deconstruction of a classical Asian dance form, Varnam functions rather as a palate cleanser, an instructive contrast.

The opening invocation of I Am A Demon, in which Pichet stands centrestage, ceremonially twisting and entwining his hands, feels luxurious after Varnam’s restraint. Then he poses in the centre of a vast sun-shaped light: first as the Vitruvian man, then in the basic wide-legged high-chinned posture of the demon role – his role in the Thai classical dance form khon.

This is an old work, premiered in 2005, but it retains its life-giving force as a tribute from Pichet to his guru Chaiyot Khummanee, who died in 2002. Now Pichet himself has risen to the rank of master. Today, he might be closer in age to his guru as shown in the projected video – gap-toothed and gaunt but similarly high-cheekboned – than to his cocky young self on the brink of his career in the same video. As Pichet watches, the nostalgia is not just for his guru but also for his lost youth. But Pichet’s body today – lithe, muscled, well-proportioned – is still beautiful, and his classical demonstrations, though they leave him sweaty, have lost none of their elegant appeal.

First he shows us the hard road to mastery, through some of the interminable exercises his guru decreed. The notorious noisiness of the DPAC Theatre stage becomes an asset here: Pichet’s stamping feet transform it into a pounding drum. Then, in a remarkable show of virtuosity, he continues to stamp with the same high-lifted knees and strongly-flexed feet, but this time in total silence.

A bottle of water upstage, from which Pichet takes occasional swigs in full view, underlines the postmodern framing of this work. I first saw Pichet in Jérôme Bel’s Pichet Klunchun and Myself in 2006, which was structured as a lecture demonstration, and I Am Demon attracts irresistible comparisons with that work. Here also he is dressed informally: shirtless and in bike shorts, muscles on display. There is a deliberate roughness, too, in the audio accompaniment of the old interview between impresario Low Kee Hong and Pichet’s guru – you can hear people coughing and dogs barking in the background, a lovely reminder of the local context of the work.

The most satisfying moment in this performance came for me when the format of lecture demonstration merged with old-fashioned stage magic. Pichet brings forth a long piece of fabric, and through a sequence of stretching, rolling and tucking movements – compelling both in their meticulousness and their practised ritualism – he transforms the fabric into the traditional chong kraben pants that khon dancers wear. With this sequence, he wordlessly teaches us how being a dancer is not just about learning movements, but about being part of culture: learning how to dress, how to listen to your guru, how to remember. Now he is really ready to dance.

Jejak Tabi Exchange 2018 in Malaysia took place 20–23 Sept at the National Academy for Arts and Heritage, and 25–30 Sept at Damansara Performing Arts Centre. This review is from the performance on 28 September. 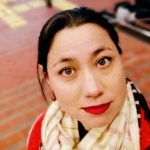 Bilqis Hijjas writes about dance, produces, organizes and teaches in Malaysia. For ten years, she was President of MyDance Alliance, an organisation supporting dance in Malaysia, where she produced the popular Dancebox performance series, MyDance Festivals 2011 and 2013, Tepak Tari in 2015, and Dancebox Festival in 2019. She also spent a decade lecturing part-time in dance criticism, performance studies, and dance history and culture at Universiti Malaya.

Bilqis currently directs the cultural program at private arts centre Rimbun Dahan, offering residencies for artists, as well as outdoor dance event Dancing in Place, and the annual Southeast Asian Choreolab for emerging dance choreographers. Bilqis is founder-editor of Critics Republic, an online platform to encourage critical discourse about the arts in Malaysia.