In post-colonial Southeast Asia, the constraint of politically-engaged artworks is not uncommon. One can see the spatial and temporal struggles through telling cases from the region: last July, Seven Decades was a retrospective of political prisoners’ narratives in and out of Myanmar that was aptly shown at the Pyinsa Rasa Art Space in the Secretariat building. In the same month of 1947, the building was the site for the political killings just before the British transferred power to the local government. It was curated by Htein Lin who was also a political prisoner for nine years (he was released in 2004). Myanmar artists usually participate in regional exhibitions to create politically-engaged artworks. Until recently, they were not able to do so in Myanmar.

Singapore has its fair share of state censure of outspoken citizens – from journalists, cartoonists, film-makers, performance artists, to hypereducated teenage YouTubers, and more. Two weeks ago, an artist-activist was adjudicated two weeks in prison after he refused to pay a USD1800 fine (which is unheard of) for his walking performance in Singapore’s central district, performed a year ago. 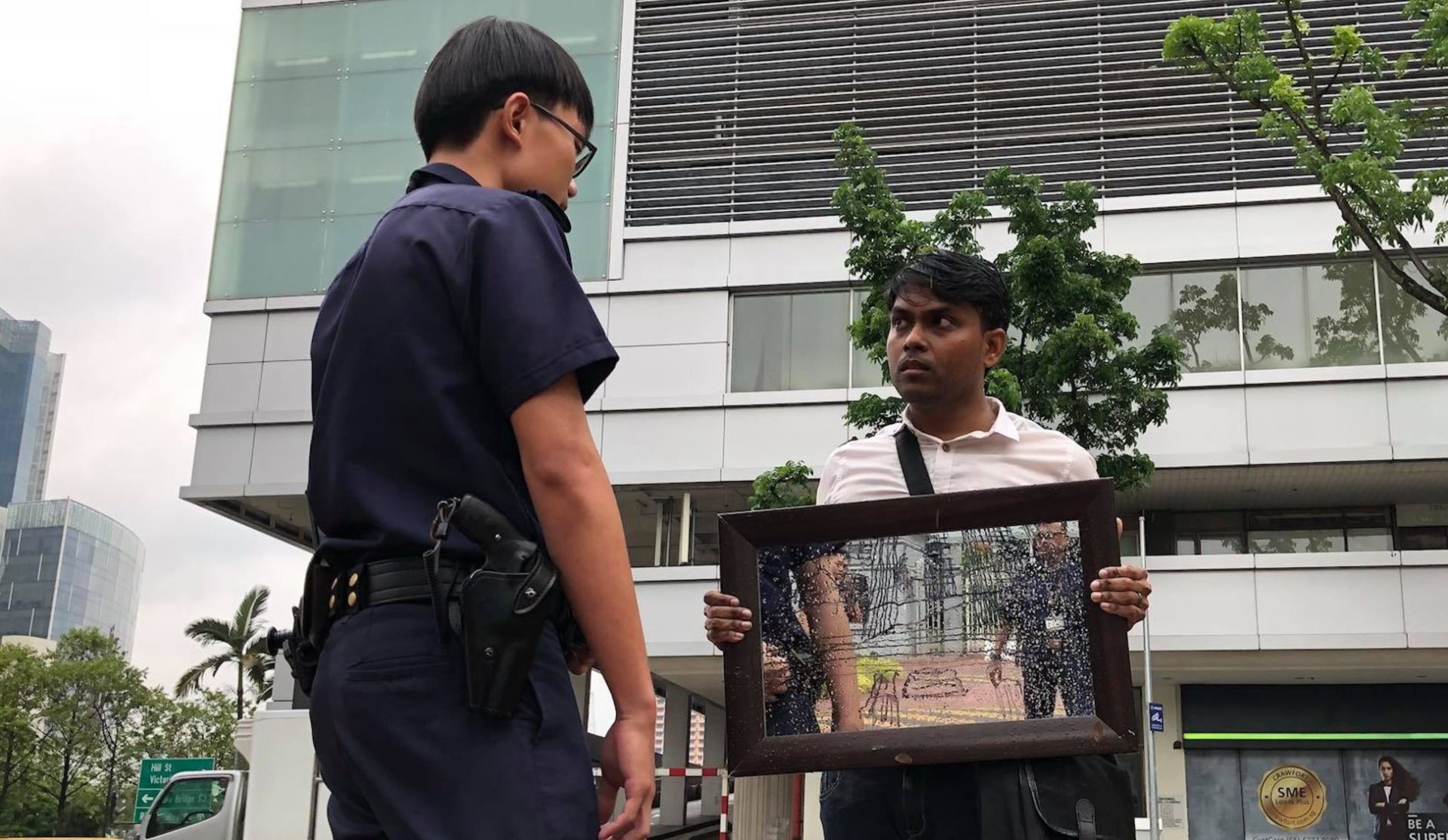 In October 2017, Seelan Palay walked alone while holding a mirror from Hong Lim Park to the Parliament House as he performed his work, 32 years: The Interrogation of a Mirror. The subject of this performance was Dr Chia Thye Poh, a political detainee who was charged with pro-communist activities and detained for a total of 32 years – 23 years in prison, and 9 under house arrest.[i] Palay’s work was primarily to give meaning to the fact that Chia upheld his ideals despite being  criminalised and denied his basic rights for three decades without any trial. In turn, Palay was arrested on the day of his “one-man procession” and a year later, was tried in court.

Palay asked during his performance, “Can a liberated work of art be contained in a state-sanctioned space?”[ii] To echo this question, one can look at how parallel cultural works of artist-activists (that inclusively engaged outside the art discipline) are denied “free space” in the Philippines.[iii] In Manila, the Red October alert was allegedly engineered to allow the Armed Forces of The Philippines (AFP) an avenue to ostracise cultural, social, and academic workers through extrajudicial proceedings. At the start of October 2018, the AFP warned of oppositional efforts to overthrow President Rodrigo Duterte’s government by the opposition parties, ballparking the Communist Party of the Philippines and the Liberal Party Philippines.[iv]

Extending from this, public universities (as a democratic space for the exchange of cultural works) were being red-tagged as a compound for cultural activists. Independent films such as Liway and Tu Pug Imatuy (2018) that were being screened within the universities’ premises were discredited as “deceptive.”[v] A considerable number of Duterte-supporters sympathised with its government’s claim that students enrol in public universities only to be recruited to communist movements, wasting away state resources. Public universities were branded as recruitment centres for social activism, allegedly exporting students from academic classes and directing them to processions (in the more loyal definition of the term) on the streets. Most Philippine civilians, blinded by the Red October warnings, found it difficult to separate different modes of activism: from editorial cartoons to ousting the government, as the AFP contained the spectrum to the “opposition.”

Liway (2018) was a film about a lady commander of a rebel army during the Martial Law in the 1970s who was imprisoned for four years with three of her children and her husband. This film was an autobiography of its director and writer Kip Oebanda. He said that he did not intend to oppose the government but only to narrate his experiences during Marcos’ dictatorship that were almost entirely different from the official narratives taught in schools.[vi] Similarly, one cannot conclude that Palay was necessarily opposing the Singapore government. Palay walked from Hong Lim Complex to the Parliament, and then to State Court where he continued his ‘Interrogation of the Mirror.’ As he was questioned in court with his mirror present as evidence, it seemed that the questions were reflected back to the examiner – a mode of interrogating oneself in self-reflexivity.

These dismissals of artistic actions are concurrent in different geographies, but it also rhymes with history. June Yap, Director of Curatorial Programmes and Publications at Singapore Art Museum, said in 2011[vii],

“Through the years, theatrical productions, artworks, performances and films by artists have been banned, cut, prevented through denial of venue, have had funding withheld, content and titles changed, and have been restricted and closed. All this in the name of the protection of faceless individuals, who if identified, incidentally are not forced to view these works… often artists fail to speak up for fear of being stigmatised and blacklisted by organisations, venues, and funding agencies. But in allowing for the normalisation of censorship of the arts to pervade society, have we failed to understand art’s capacity for promoting social cohesion and understanding, by providing a space where we can civilly disagree?”

Yap also referenced Catherine Lim, a fiction writer, who posted her opinions on a local newspaper regarding Singapore’s political climate.[viii] Afterwards, Lim was challenged by politicians to step into the political arena if she should want to engage in politics. How Lim was deemed to be “out of bounds” back in 1994 resonated with Palay’s question again, “Can a liberated human mind be constrained by a state-sanctioned space?”[ix] This enclosure of discourse was refracted by what Neri Colmenares, a Philippine attorney, said recently for the International Peoples Tribunal Philippines[x],

“The streets are owned by the common people. Throughout our history, we did not win the most important demands in the courts or Congress. We won it in the streets. Here, artists and other cultural workers have a big role to play: because the street is the arena of knowledge and direct contestations for the people.” (translated by the author)

Looking at Myanmar artists who were restricted from making politically-engaged art within their own country until recently, Oebanda’s narrative about political imprisonment being red-tagged by the government, Palay’s question about constraint and containment cannot be more apt. However, unlike other politically-engaged works, it seemed that his performance expected to include the judicial system in the conversation all along. From its performance at Hong Lim Park, to the time he was arrested, when he was at court, and after his release, all was part of his performance. Where others were deterred, Palay’s interrogation carried on.

[ii] The Online Citizen, “Activist arrested by Police outside of Parliament House after standing alone with artpiece.” (Singapore: October 2017)

[iii] Palay spoke of creating a “free space” for the artists of the next generation by establishing is art space, Coda Culture. See Akanksha Raja, “Coda Culture: A Space for Freedom.” ArtsEquator (Singapore: 11 October 2018).

Eunice Lacaste is an emerging art practitioner based in Singapore. She was born in Manila in 1989 where she took her art studies at the University of the Philippines. Recently, Eunice completed her postgraduate degree in Asian Art History at Lasalle College of the Arts Singapore. Her practice ranges from writing, painting, to installation that includes the public. She is directed towards social engagement with the audience together with the communal space. Eunice contributes her writings to online platforms on Southeast Asian art and had conducted art projects in Singapore, South Korea, and the Philippines.