As I am waiting for the show to begin, the glint off the four silver chairs forming the basis of the set of Forked is sharp, unyielding, with a trophy rested on one of them. Forked then commences with a highly frenetic, animated monologue by protagonist Jeanette Peh, an energetic and eager to please aspiring actress hoping to showcase snippets of her life via a social media platform, “Staged Whispers”. “Staged Whispers” is introduced and thereon accompanied by a repetitive ditty, a chirpy proclamation of how Jeanette’s online persona is “live and unstaged”. Jeanette (later known as “Nettie”) picks up the trophy and launches into her love for drama beginning as a winner in her whirlwind Euphoria Junior College life, which probably cements Jeanette’s intention in almost every occurrence in the performance: She believes that as an achiever, she has to deliver exceedingly, whether in the form of overcoming an impression in her acting class in London (that Asians are inept at speaking English or for that matter, capable of delivering a stirring monologue) or constantly reinforcing to her Internet viewers that she is recognized yet relatable (documenting her struggles in her inter-racial relationship, which she has pursued via dating website Tinder).

This is where the play begins to self-sabotage in the playwright’s quest for bringing out the complexities in handling the differences she has personally faced, feeling “culturally orphaned” when participating in her actor’s training abroad amidst fellow classmates of the same descent. The characters are heavily employed with various defence mechanisms to ward off their reservations in confronting their individual issues around racial prejudice. At several instances, the scenes are interspersed with bursts of exaggerated parody, comedic stereotyping which teeter-tottered between being too delicate as a solid scathing insult yet too brash as a passing joke with a punch line, and risen conflicts bubble and burst as quickly as they surfaced. Tan seems held back in allowing her characters room to roam around and aggravate their deepest insecurities. With the added pressure of linking the entire play to a broader, political dilemma (Brexit), the characters have no leeway to formulate their relationships with one another as people who are conflicted about where they come from and where they want to take themselves to because they seem squashed by their insulated space, swathed climate and reiteration of their preordained roles. The love life of Jeanette Peh was also secondary even though it ricocheted the play in several directions that were in accordance to theme, it became a supplementary tool for muffled distraction.

Due to the unpredictable timing of the cast’s comedic placement, conflict development and terse interaction with each other, the audience was caught off-guard at how to respond to these spectrums of racial violations. However, credit goes to the actors Ethel Yap, Jamil Schulze, Chang Ting Wei and Jo Tan for pushing on with their characters, the director Chen Yingxuan for staying sensitive to the playwright’s need for expression, and lastly the playwright Jo Tan for acknowledging that as we subscribe to these stereotypes, we are in fact perpetuating our own ignorance. With a less self-conscious take on her original intention, the script could be a step to assuage us that our degrees of discrimination need to be gradually understood rather than immediately tackled and extinguished.

Forked concludes with a fork in our protagonist’s path – how is she going to continue her vocation in acting when she no longer aligns with her education institution, her peers and more importantly, faces up to her innermost qualms about her identity? As a fellow playwright alongside Tan for the Watch This Space mentorship platform (under Chong Tze Chien of the Finger Players), I want to address the meritocratic relevance she has also inputted in Forked. In Singapore lies the tempting trap of wanting to push theatre and its writing straight into the oven of production before the dough is given time to rise. This is a personal challenge I am also fraught with, be it from familial expectations, perceived competition and seemingly dwindling opportunity from a climate I have little choice but to adapt to, in which Forked has covered starkly if, unfortunately, rather downplayed in its rigour to please and ornamental in its caricatures of its characters.

This review is based on the performance on 26 January 2018 at 8pm.  Part of the M1 Singapore Fringe Festival, Forked by Jo Tan ran from 25th –  27th of January at NAFA Studio Theatre.

Euginia Tan is a Singaporean writer who writes poetry, creative non-fiction and plays. She enjoys cross-pollinating art into multidisciplinary platforms and reviving stories. Contact her at eugtan@hotmail.com. 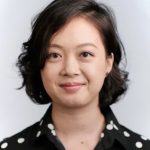 Euginia Tan is a Singaporean multidisciplinary writer with experience in poetry, fiction and playwriting. She also pens curatorial essays for visual artists in Singapore and Malaysia. She is interested in looking at how text can be re-interpreted into different mediums, and reviving/ re-adapting stories.