As with any thought-provoking installation, Latiff Mohidin’s “Langkawi” series, on show at Chan+Hori Contemporary, evokes a large range of perceptions from its audience. A cursory survey of his arca dinding will bring to mind many different things for different people. Some have compared them to rice, the life-giving grain so important to the region. Others have commented on their capsular shape, joint in their completeness and pregnant with energy. There have been associations to the lingam, the divine generative male force in Hinduism, and its counterpart the yoni, the regenerative female force within it. Others have Islamic interpretations of the work, with the semi-circles book-ending the sculptures said to reference domes of mosques, and the square in the centre placing the Divine Kaaba within the Human.

Yet, despite the trove of anthropological, theological, and art theory readings into the works, the first thing that struck me about the works was how instinctively they reminded me of the Nusantara, the Malay Archipelago I grew up in. How the deep ochre hues, reminiscent of Rothko’s work, immediately bring to mind the late sun tinging the gigantic dome of Masjid Istiqlal, a sight to behold when trapped in a three-hour traffic jam. How the colours were the same as those painted on the wooden boards that made up the stilt houses in Palembang, my mother’s hometown. The sprightly tones are content with being simple, they commingle with the smell of fish. There is a very rooted quality to these evocative works. It was obvious that Pak Latiff was very inspired by the place he dwelled in.

The exhibition title, Langkawi, seems to concur. It is a titular tribute to the Kedahan island to which Pak Latiff retreated from the ensuing noise in post-independence Malaysia. Having barely finished expelling Singapore just years after independence, the country was still promulgating its postcolonial identity. The question at hand: what is Malaysian art? The government pushed for Malaysian art to be first and foremost Muslim and Malay, but even the casual tourist will understand that Malaysia is far more cosmopolitan than that. The eminent Sinhalese-Malaysian artist Redza Piyadasa’s work paid heed to indigenous pre-Islamic mythologies and catalogued the diverse Malaysian landscape beyond that of the Melayu, posing a challenge to this conception as well. What about the myriad indigenous tribes and ethnicities? The racial minorities planted here by trade winds centuries ago? This was compounded by a restlessness that sprouted from within Pak Latiff himself, who was dealing with confusion in his practice after an international upbringing in Singapore, Malaysia, and Berlin left him dealing with a tangle of influences. Amidst the rising noise, Latiff fled for the idyllic tropical island Langkawi.

“(It was) a creative way of keeping myself balanced,” Pak Latiff reminisces, “in the old Japanese tradition, you have to empty yourself completely, then pour in whatever you gain to feel again. I was actually training myself, straining myself from overdoing and excess”. This philosophy is self-evident; the works are a departure from his previous pieces from the Pago-Pago and Mindscape series, differing both in medium and philosophy. Pak Latiff is known for conceiving his own indigenous brand of abstraction, but Langkawi takes this abstraction even further with the use of minimal, elementary forms.

A piece of canvas forms the centrepiece of the work, and the canvas is joined by two pieces of semicircular wood. The entire piece is then coloured, typically in a gradient. A square “window” usually graces the centre of the work. The result is an elongated piece, simple in form but balanced and wholesome, a testament to both Pak Latiff’s carpentry and artistry. Pak Latiff cites a sudden inspiration, culminating in a certain quietness, almost minimalist in quality, in his work. “I want the shape and form to be simple and basic,” he says, “to convey the depth, vastness, and stillness.” The square in the middle of the work is a window, an invitation to go beyond, or enter the artwork. The overall impression is a clarity, purity. “I was in the mood for minimalism,” he quips wryly.

The works look deceptively simple, but a closer examination would yield an appreciation for Pak Latiff’s detail. The paintwork is composed of Pollock-style splatters, applied by sprinkling the paint using his thumbs using a very controlled energy. The gradients featured in some of his work are achieved this way, and so are the fabric-like textures, reminiscent of tenun, the Malay world’s weaving technique. I was only made aware of this when a friend brought me closer to the work. Having enjoyed the work from a distance, it was easy to miss the detail involved in the paintwork, because the sculpture is perceived as a simplified whole. It is this play on perception that made me thoroughly appreciate the richness of Pak Latiff’s works.

The dynamism of the medium and form of the sculptures makes room for multiple perspectives. Unlike the canvas where the work ends its dimensionality in what is on the canvas itself, his wall sculptures are fiercely three-dimensional. He experiments with protrusions and cavities, different forms that cast different shadows and have multiple viewing points. This is on top of the abstract, open forms he uses, inviting the viewer to project meanings unto the works, bringing one’s personal experience into the exhibition. “The viewer has their own sensibilities,” Pak Latiff says. “They see something, and they feel something on their own. I don’t want to dictate to them what they want to see.”

“I want people to share (what they think of the exhibition). You are free to react, you are free to think. That’s the beauty of art.” Pak Latiff is a curious man. A wizened, sprightly 77-year old with a shock of salt-and-pepper hair and constantly laughing eyes, he is deeply interested in gauging the reaction of the contemporary art world to a work conceived almost 40 years ago. The last exhibition was in Penang in 1980. “I want my work to be curated by the young and viewed by the young,” he says. The curator Khairuddin Hori, one half of the founding duo of acclaimed gallery Chan+Hori, is a friend of his son, part of what Pak Latiff dubs as “the new generation of artists”. Pak Latiff is interested in how Khairuddin would curate the show to his contemporaries.

Khairuddin’s curation is deeply rooted in humanistic and anthropological traditions. His curatorial essay heavily invokes the tradition of the Minang, Pak Latiff’s ethnic group. From the adat perpatih, the Minang’s matrilineal customary laws, to the reverence for Mother Nature in the Minang male culture of merantau (journeying), Khairuddin infuses Pak Latiff’s work expertly with grounded local readings. “Pak Latiff calls my essay (solely) ‘my interpretation’,” Khairuddin says, bemused. Ultimately, it seems as if Pak Latiff would like his work to remain subjective and open to individual interpretation.

Langkawi is really quite different: no other artwork has its liminal form, part sculpture, part wall art. Though tempting our often Occidentalist mentalities to draw similarities to a mirage of European traditions, Langkawi actually remains divorced from such influence. There is no source of inspiration but ilham, what comes within the self, void of any informing Western tradition. The work is, however, somehow deeply connected with the context through which it manifests itself, imbued with a strong sense of place beyond that of the self, acutely aware of its surroundings. “A lot of things (related to tradition) are still among us,” Khai tells me. “To rid of something within history takes more than a century, even up to 300-400 years.” The culture of the pre-Islamic Melayu Pura, which he gives as an example, was supposedly eradicated by the incumbent Malay-Muslim culture, but we see it evident in the everyday lives of those who dwell within its expired geographic confines. “It’s there, it never left us,” Khairuddin ascertains.

We see it in the adat perpatih’s ancient rituals, dating back millenia, still bequeathed today. We see it in the parallels between the adat dan budaya (traditions and cultures) of the Malay and the Sanskrit world. We see it in Mahsuri, the fanciful tale of the mythical Langkawi princess, the namesake of one of Pak Latiff’s sculptures, White Langkawi. This vastness of material hides humbly within the simplicity of Pak Latiff’s sculptures, in the underplayed up-sweeps evoking the gables of the rumah bagonjong (Minang traditional houses), and in the vivid colours and the references to the various local vernaculars.

Hori’s masterful curation illuminates these whimsical readings. “(Pak Latiff) knows a lot, but he will never tell you directly (what he knows),” he says, “but he cannot be unaware of Langkawi and its context and space.” Having just only exhibited his Pago-Pago at the Centre Pompidou – the first South-East Asian artist to exhibit there – Pak Latiff is keen to hear what today’s Singaporean contemporary art scene has to say about his homecoming show, decades dormant, still discreetly full of secrets and waiting patiently for the viewer to discover what they will within.

Langkawi runs as part of the Disini Arts Festival at Block 9, 9 Lock Road, Gillman Barracks. It closes on the 22nd of July.

The writer would like to extend his thanks to the artist himself, Khairuddin Hori and Anathapindika Dai for their generous help in the writing of this article. 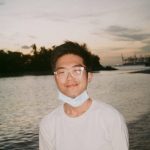 Gerald grew up in Jakarta and Singapore. He is currently pursuing an Archaeology and Anthropology degree in London and writes about urban studies, art, and film.