As I enter the Esplanade Theatre Studio to watch Extremities, I’m already on my guard. The plot synopsis and content advisory in my programme booklet have primed me for what’s to come, and so each move I make seems a tiny, if unconscious, exercise in vigilance. I pick a seat that affords me an unobstructed view, but not one so close to the stage that I’ll be in the “splash zone” of the violence. I am scared of what I might see up close.

I run my eyes slowly across the set — a cross-section of a home. I’m not alone in observing it carefully. A man is already looking through a window, his gaze unwavering, into the empty living room. I’m reminded of John Berger in Ways of Seeing: men survey women before treating them.

In this staging of William Mastrosimone’s Extremities, directed by Aarne Neeme and performed by the Intercultural Theatre Institute’s graduating class of 2018, the assertion of power, control and violence that is at the heart of sexual assault plays out swiftly and fully in front of us, leaving us with little option but to bear witness, with our eyes and our ears, unless we choose to leave the theatre. Once the initial shock of the thwarted rape attempt eases a little, we are confronted with the play’s central dilemma — there’s no evidence, just her word against his. Now what?

Dorothy Png’s set design hints at possibilities for relief and escape. Through windows we see hanging plants in bloom, next to it a white door. Doorways indicate a kitchen, and there is mention of a bedroom. In the living room, there’s a fireplace set in a red-brick wall. The innocence, warmth and elegance of these elements is dispelled in quick succession as Marjorie (played by a very capable Hau Guei Sze (Zizi) who deftly yet convincingly transitions from a lady of leisure sauntering languidly through her home, confident in her domain, to a prowling beast on edge, whose quiet fury and refusal to be comforted as she seeks to reclaim control in her home, now proven penetrable, belies the extremity of her actions) relies on her instincts to thwart intruder Raul (Lakshmana KP).

Handed the role of the obvious antagonist, Lakshmana deserves credit for the physicality of his performance; his height contributes to the chilling assault scene as he towers over Marjorie and subsequently contributes to the almost-humour of his lanky frame curled up behind the fireplace frame where she holds him hostage. Despite being blindfolded and tied up, he asserts his personality through just his voice, vacillating between sinister gaslighting threats and pathetic pleas for help, darkly childlike in his desperate and relentless need for attention. The attempted rape scene but — perhaps for some — also the subsequent torture scenes are uncomfortable to watch; such loaded interactions must have required a lot of trust and both actors appeared professionally comfortable and confident (one hopes they felt so as well), for which credit must go to the director and the rehearsal process.

It’s a plant to be watered, a distracting tussle with a pesky insect and the ensuing momentary lapse in attention that enables him to enter Marjorie’s home. She calls out to an imaginary cop husband who doesn’t come to her rescue from their supposedly shared bedroom. An overpowered Raul is held captive in the fireplace, doused with gas, and threatened with live matches and a kettle of hot water from the kitchen.

As Marjorie outlines her plan for revenge on Raul, convinced that the legal system will offer her no justice without proof of physical harm, we learn that there is a field behind the house where she buries highway roadkill, and where she intends to dig his grave. Yet, all the action will eventually unfold only in the fully visible living room we are all privy to. Even what goes on here remains hidden from the outside world, first through Raul’s design when he traps Marjorie in her own home, and then by hers when she locks her two returned housemates Terry (Caroline Chin) and Patricia (Pooja Mohanraj) in along with us, rendering the set a loaded space with a loaded secret that is now also our burden to bear. We become complicit and join the trio of women in reckoning with the dilemma of what they should do with their captive.

In fact, having witnessed the attack for ourselves, we know even more than Marjorie’s housemates who only hear about it, having literally walked into an ongoing situation and are forced to choose a side; Marjorie variously tries out “choose him or me”, “choose you or me”, and eventually not even “me” but “we”, invoking the potential threat to all of them if Raul goes free.

As they circle around each other in the tight space, guided by the director’s careful blocking, we perceive them in relation to each other even as they come to terms with how they are seen by their peers: the airheaded, easily frightened one (Terry), the idealistic one with a saviour complex (Patricia) and — the most loaded accusation of all — the show-off that is “asking for it” (Marjorie). As supporting characters, Terry and Patricia could easily have been generic and personality-less, but they are depicted realistically and relatably by Chin and Mohanraj respectively, especially through Chin’s use of nervous gestures — smoothing her skirt, downing a glass of wine, tugging at the rape whistle she wears around her neck and in Mohanraj’s scenes where she is not so focused on trying to handle the situation through her professional therapist’s lens, but when she simply tries to console Marjorie, concerned about a friend’s emotional welfare.

All this is done so subtly that a significant line near the end stands out as all the more pronounced. In a heavy-handed scene that sees Marjorie finally address the now-itchy spot she assumes is a bee’s sting, she learns from her now somewhat subdued attacker that it is a wasp’s sting, that a wasp doesn’t lose its stinger so there’s nothing to pull out — in other words, there’s again no physical evidence of an attack, only a smarting red welt. Raul, of course, is revealed to be a wasp, admitting that he’s done this to other women before. While this lack of subtlety could be attributed to Mastrosimone’s original script, in this staging it is compounded by Marilyn Chew’s sound design which has the recurring appearance of loud buzzing sounds between scene transitions, building up into a deafening crescendo obviously intended to point to Marjorie’s troubled state of mind.

Extremities started with a closed door (Marjorie was trying to keep the wasp out), but the wasp got in anyway and left its sting. Ultimately, Marjorie successfully ensures one door is closed forever, as Raul is revealed to have lost his vision. In blinding his supposed windows to the soul and depicting him as a pathetic, flawed, broken person, a shred of humanity is restored to the perpetrator, though redemption seems a stretch.

Extremities by the Intercultural Theatre Institute’s graduating class of 2018 was written by William Mastrosimone. Directed by Aarne Neeme, this staging ran at the Esplanade Theatre Studio from 29 November to 1 December 2018. This response is based on the performance on 29 November 2018, 8pm. 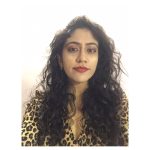