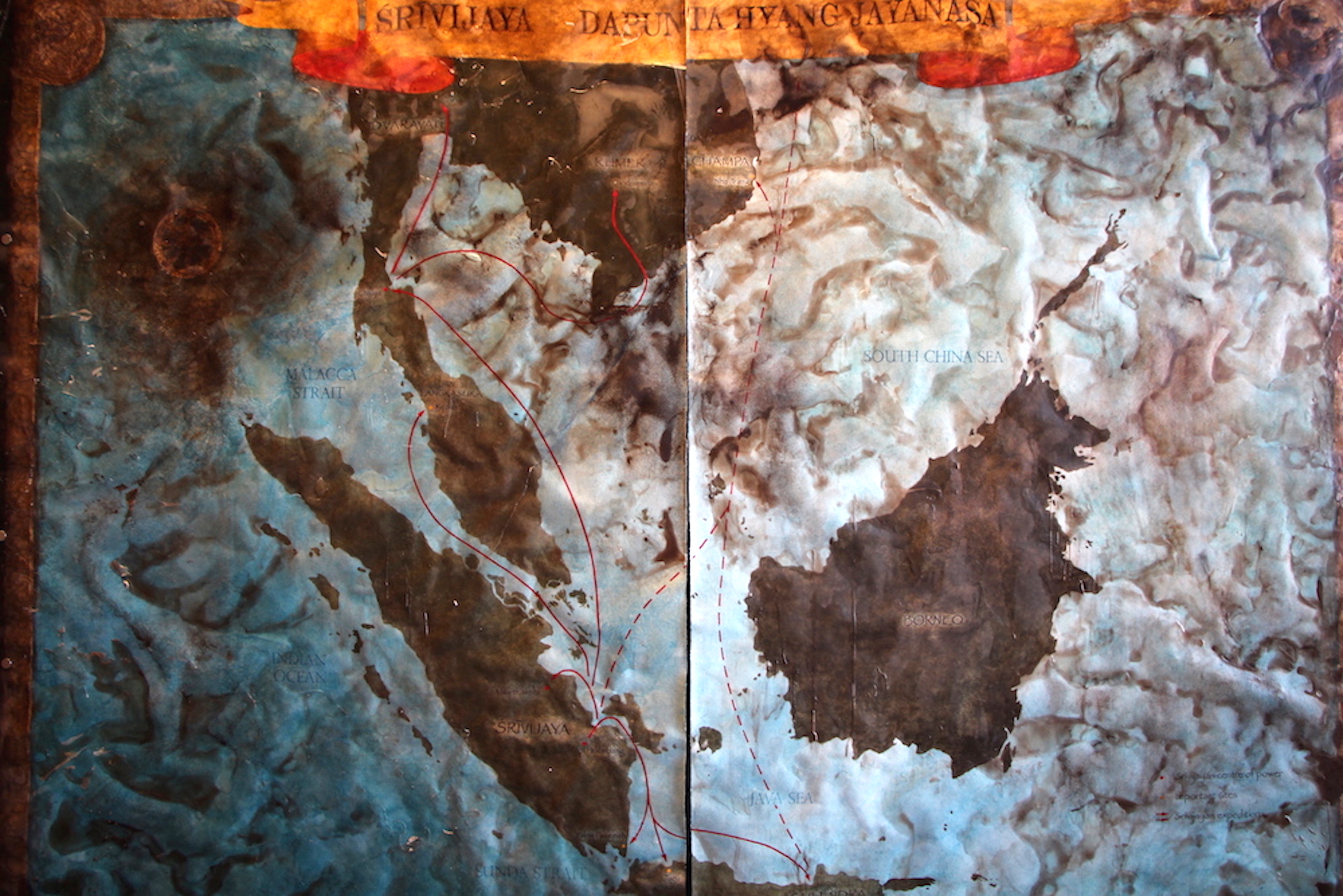 – Zai Kuning, at the launch of Dapunta Hyang: The Transmission of Knowledge, 10 May 2017

With his palms over the bow, Zai launched the ship. At the stern, however, the ship was incomplete. All this, I sense, made the vessel less a complete spectacle than a backdrop for the telling of stories. For a ship carries its passengers to a destination, but it also departs from a port of embarkation, a place of its origin. But each journey chips away a plank, loosens a knot and most of all subjects its passengers to all the risks of travel. Ships, then, are also biographical and personal for the passenger. Each individual inscribes one’s meaning to the vessel.

Zai’s speech at the launch was different from the speeches I had heard at the launch events of other national pavilions at the Venice Biennale. While the other speeches spoke to and about a ‘global audience’, Zai spoke a message of personal love— of his appreciation and affection for those who helped built the ship and for the spirits that made this work possible.

Upon hearing Zai’s words, I thought about lovers waving farewell at the airport. I also thought about the letters we send to faraway friends and the ways in which art can be a labour of love, and through its manifestation, conveys the love we have for each other and the places we belong to. These images led me to conceive of this review as a series of postcards to you, my reader.

While the Venice Biennale is a festival heavy on performance art and video art, it is also heavy on love in all its forms. The love-hate relationship artists have with the subject matter of their works could also be discerned (informed by the materials and conditions that made them possible).

The idea of the ‘nation’ dominated the Biennale, and I found that comparisons were often made along national borders. “[T]he Germans steal the show,” the headline on Guardian exclaimed, as if art is more concerned with stealing than affirming the realities affecting humanity. While many international artists mobilised the images of global crises such as migration and climate change, I noticed that Southeast Asian artists in particular asked instead for the viewer to contemplate quieter but more specific images of their country and the messages of love inscribed in their art works. Here then is my observation of the Southeast Asian works:

I was immediately made aware of an uneasy relationship that the artist has with rubber trees. A film projector projected her film Des Gestes Démesurément Constraints. De Récolte à Révolte on the wall. One screen showed images of rubber tappings, while the other showed a pair of hands sculpting clay arms. Adjacent walls, like a scroll painting, were coated with paint that consisted of a mixture of rubber and chemical pigment. Hung on those walls were three photograms with imprints of frozen leaves. Lying on wooden crates were wax cast of logs of rubber trees.

When the works were viewed together on a backdrop of pink and lilac stains (stains which had a magical dreamlike quality and yet looked like faint bruises and smeared sap), they captured the complicated relationship between nature and human industry.

Not far away was Cambodian-American Sopheap Pich’s piece—a scaled down meditative reflection of his well-known geometric and cellular rattan and bamboo sculptures. His sculptures are often woven together using a traditional basket weaving technique and are impressive in shape and size. A relatively smaller rattan sculpture lied half-buried in sandstone, like an unfinished concrete pillar. Meanwhile, the prints on the wall resonated with the sculpture by showing wavelines reminiscent of the lines on a heart rate monitor. The lines were made using a painstaking process of immersing a bamboo stick into a mixture of natural pigment and gum arabic. The stick would then be pressed repeatedly on paper, collecting its impressions, bamboo and gap.

With The Red Rubber I saw the violence rubber tappers inflicted upon the tree barks. But both works present an industry that makes possible a spectrum of human invention, including the artworks on display. They perform an unresolvable paradox between art and craft, livelihood and artistry. But most of all, they speak of the fact that what nature gives us, we often fail to give thanks for. 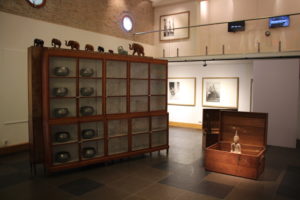 Near the main entrance of Giardini, where most of the national pavilions were, was the Thailand Pavilion. It was next to the kitchen of a restaurant and bar, Paradiso. The moment I entered the space of Somboon Hormtientong’s Krung Thep Bangkok, I saw the iconic images of elephants and Buddha clashing with lurid plastic chairs and baskets. Meanwhile, restaurant waiters weaved in and out of the kitchen to cross the pavilion and into the dining area.

Cabinets and chests of iconic images of Thailand, sitting as if in a storage room of a kitchen, intimately captured Somboon’s love and sadness when his monarch passed away. At the same time, as life went on, each chest and cabinet hoarded this love and loss into contained objects. They were now kept in a carefully composed bricolage of the commonplace and the sacred of an exhibition space.

The Philippines Pavilion similarly overwhelmed the spectator with what now seems to be a common thread of comparisons. The curator consciously proposed this perspective. Named The Spectre of Comparisons, the exhibition borrowed its title from the seminal work by the late Benedict Anderson. These art works ostensibly interrogated the hauntings and figures of Philippines’ violent colonial histories (plural because of the country’s sequential colonial rule). I saw, for instance, the mural-like large paintings of Manuel Ocampo, where religious symbols clashed with bodily mutilations, and cultural references (Shakespeare) collapsed into sacred images.

Meanwhile, Lani Maestro’s neon-light installation No Pain Like This Body invited the viewer to pose for selfies. The significance of both exhibits was shared: the body of a colonial subject is constantly subjected to a gaze that deforms and even mutilates bodies into images fit for consumption.

Speaking of gaze, Tintin Wulia’s (Indonesia) 1001 Martian Homes imagined 1001 islands, eyes, or satellites staring at passing spectators. As they walked past the installation, the images were beamed to a simulcast in Jarkata.

The thing about gazing is that you may lose your way if you stare at the map more than at the reality around you. It took me a while to find the Singapore pavilion. When I stopped looking at the map in my pamphlet, I entered through a passage and saw a vessel.

Upon entering the space, I saw a huge yet seemingly unfinished vessel made of rattan, red strings and beeswax. It was suspended from the ceiling, raising several red sandstones tied to the vessel up from the floor – except one, a solemn reminder of some burden unloaded. On the side, 31 portraits of Mak Yong practitioners and islanders from Mantang stared into the camera – except one, a Mak Yong master who I could hear speaking an archaic Malay language through an audio recording, whose face I could not see. What I can see instead, through the window, were the remains of a former shipyard at the Arsenale.

I met many Singaporeans in that space, that day, including Singapore’s Minister of Culture, Community and Youth. We were somewhat transported back to Singapore whilst we were in Venice, from one island to another island. Except one – Zai was not interested in being the representative ‘Singaporean artist’. Instead, we spoke privately about the birth, the enlightenment and the death of Buddha on Vesak Day (10 May 2017). As I listened to the speeches and stories at the launch of the Singapore Pavilion, I wondered how a transient space could serve as a vessel that circulates messages.

You could see through the vessel and find skeletal shapes hanging inside the incomplete hull, inviting the viewer to imagine a complete vessel. This vessel spoke of a pre-Islamic history and the narrative of Dapunta Hyang and the Srivijaya empire. Yet it also spoke of Zai’s biography in relation to those of his adopted family and friends on islands.

Dapunta Hyang performed a tentative soundscape, possessed by the multiple stories and displaced spirits that make up the incomplete vessel. Nevertheless, his friends painstakingly built the vessel after much sweat and labour, knot after knot joint by beeswax and burning.

‘Singapore’ might be imagined through the Biennale pavilion, but I believe it is important to recognise the spiritual forces that compelled Zai and many others to carry their messages of love to others here in Venice.

Singapore is often found not in grand spectacles but in small spaces carved out from the main facades. I found Singapore artist Sarah Choo’s work in the European Cultural Centre and Erika Tan’s video installation in the UK funded ‘Diaspora’ pavilion, where the spaces were marked out, away from those of the Biennale.

Sarah Choo and Erika Tan’s works both questioned the notion of space as contested and shared. As our entangled and interwoven identities are neatly packaged for international exhibitions, we may neglect the process (or travel) that supports our arrivals. In Choo’s video installation, Art of the Rehearsal, traditional arts performers are superimposed onto Singapore’s backstages of Little India, where they repeatedly rehearse their performance and put on makeup. By reversing our viewpoints from the façade to the behind-the-scenes where bodies rehearse traditional choreographies in the literal back-alley of Little India, Choo’s notion of identity is one that constantly rehearses itself into a loop.

Erica Tan’s The Forgotten Weaver featured actors dressed as imaginary attorneys, questioning the motives of Halimah Binti Abdullah, a weaver woman from Malaya. She was thrust into the imperialist gaze in the 1924 British Empire Exhibition in London as a representative sent by the colonial office. She was to later die from pneumonia upon her arrival. The installation echoed the weaving technique of the weaver woman – a journey short-lived as she succumbed to the English weather.

I would like to think that in those videoed repetitions the desire to proliferate stereotypical constructs is ultimately supported by our mundane activities – making a meal in a kitchen, climbing a ladder to fix a lamp, washing with a bucket of soapwater, weaving. Perhaps stereotypes (stereo- as ‘solid’, ‘three-dimensional’; and type as ‘a blow’, ‘a dent’, ‘an impression’) resonate with us when we allow those impressions to be wrought of sounds and actions that fill up the cracks.

Travel brought the artists and art makers from their countries to a constructed and imagined space in Venice, where there was a deliberate weaving of images. The ‘International’ could not be more prominently charged with a significance that is sometimes separate from the realities they were surrounded by but did not engage with. I did not really find ‘Southeast Asia’ amongst the neat Biennale catalogue of nations. But the journey was worth it, at least to recognise the shared histories we have as neighbouring nations trying to reimagine ourselves, careful not to forget the geographies, ecologies and material histories that shape us. Like lovers, sent off, sending back postcards to say ‘I am here. How are you?’

Alvin Eng Hui Lim is a performance, religion and theatre researcher. He holds a PhD in Theatre Studies from the National University of Singapore and King’s College London. He is currently Postdoctoral Fellow at the Institute for Advanced Studies in the Humanities (IASH), University of Edinburgh, and Senior Tutor at the Department of English Language and Literature at the National University of Singapore. He is also the Deputy Director and Technology and Online Editor (Mandarin) of the Asian Shakespeare Intercultural Archive (A|S|I|A), and Editor of Theatre Makers Asia.