The Human Voice at Loft 29 on the closing weekend of George Town Festival marks the first collaboration between veteran actress Susan Lankester and Joe Sidek, the festival’s founder and driving force, here in his directorial debut.

In his stage notes to La voix humaine (The Human Voice), written in 1927 and first performed in public at the Comédie française in Paris in 1930, Jean Cocteau describes a woman alone in a night shirt on a bed on a bare stage, deliberately stripping away distractions and artifice from his one-act play. She anxiously awaits a phone call, suffers the indignity of wrong numbers and crossed lines, and finally speaks to her beloved, who wants their love letters back so he can destroy them. She feigns acceptance of their break-up, but her true feelings for him and her spiraling desperation overwhelm her as she understands that her loss is irreversible.

Her bigger-than-life reaction in the throes of drama and turmoil is central to The Human Voice and to flamboyant Cocteau’s esthetic. When the play opened it was cheered for its modernity as much as it was vehemently derided for a heroine and an author who were judged to be shameless and immoral. Cocteau wrote The Human Voice the same year that he wrote Le livre blanc, a poetic tale of his early loves with young men. Though published anonymously, he left little doubt as to the paternity of the book, adding his distinctive drawings and a signed foreword to later editions.

Cocteau basked in high drama, onstage and off, magnifying characters, first and foremost himself. He projected his own defiance and non-conformity onto the heroine of The Human Voice, a quintessential camp icon in a Susan Sontag sense of the term. In creating the desperate phone calls, it’s hard to imagine that he didn’t draw upon his own mourning of Raymond Radiguet, his literary protégé who was more than two decades his junior and who had died of typhoid in 1923. But prudish Parisian society would never forgive him for flaunting such indiscretion and in later years prevented the artist from taking a seat as an Immortal in the august Académie française, an honor traditionally granted to France’s greatest writers.

In Joe Sidek’s version of The Human Voice, the  woman is given the Straits-inflected name Audrey Monteiro, a showgirl in colonial Malaya. She rings Ipoh, asks for Tuan (“Monsieur” in the original) and remembers their time in Singapore. She first appears on stage singing No Regrets, the English cover of Edith Piaf’s affirmation Non, je ne regrette rien before retiring to her cluttered dressing room to wait for her lover’s call.

Portraying her as a torch-song singer isn’t merely cosmetic. Besides hinting that social divide may be the unsurmountable obstacle to their happiness, the lyrics sung with growing gusto by Malaysian actress Susan Lankester underlines a dimension of her character that other memorable performances have steered clear of. Incomparable neorealist actress Anna Magnini directed by Roberto Rosselini is wide-eyed and uncomprehending; French legend Simone Signoret’s audio version conveys despair entirely through her distinctive throaty rasp and her poignant silences; Ingrid Bergman’s patrician portrayal is steeped in helpless pathos. All are women on the brink.

Lankester on the other hand chooses a much more difficult path and her performance confirms that her second acting career will be more memorable than her first. Beginning with Mekanik in 1983, a string of popular film and TV roles including iconic sitcom 2+1 and a requisite pop album owed more to stereotypes and shoulder pads than they did to subtly drawn characterizations. After a long hiatus, Lankester returned to stage and screen taking on decidedly more substantial projects like Eve Ensler’s The Vagina Monologues (dubbed The Good Body for Malaysian audiences) as an actress, director and producer. 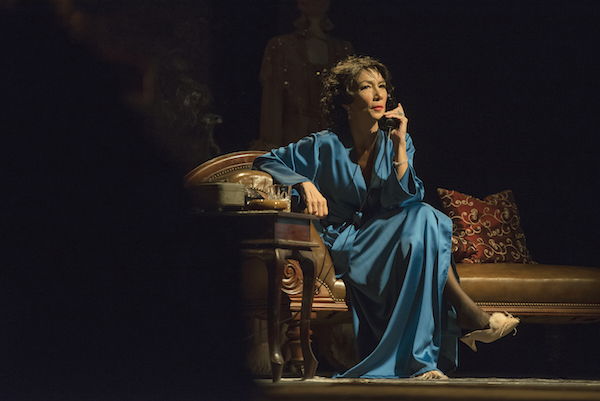 She alternates almost emotionless restraint with self-awareness (“Stupid! Stupid!” she hurls at her vanity table mirror when she realizes the extent of his betrayal). Whereas lines like “What if I said I knew you were lying” and “Darling, listen to me” are usually played as grasping at glimmers of false hope, Lankester tinges them with resistance, determination and maybe even a hint of bitchiness. She is heart-broken. But to the bitter end, her destiny remains in her own hands. She may be a jilted showgirl, but it doesn’t make her any less the diva. Some spectators may regret the hysteria that carries other performances, but what the heroine loses in pathos, she gains in depth and empathy. She takes off her wig and stares into her mirrror, à la Marisa Paredes in All about My Mother, a performance that was already an homage to Bette Davis in All about Eve, and we see straight into her unadorned soul, just as Cocteau intended.

The Human Voice isn’t as much a monologue as it is a dialogue: one between a woman and the lover she has lost; between the woman and herself, swinging between determination and delusion; and between words, spoken or unheard, and the long silences that punctuate them. 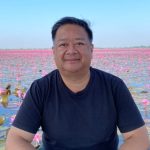 Vincent Vichit-Vadakan gave up a long career in Paris publishing to learn Italian and travel the world. Now a journalist based in Bangkok, he writes about heritage, culture, food and tourism for a variety of international publications. Chances are that he is planning his next trip, and his next meal.