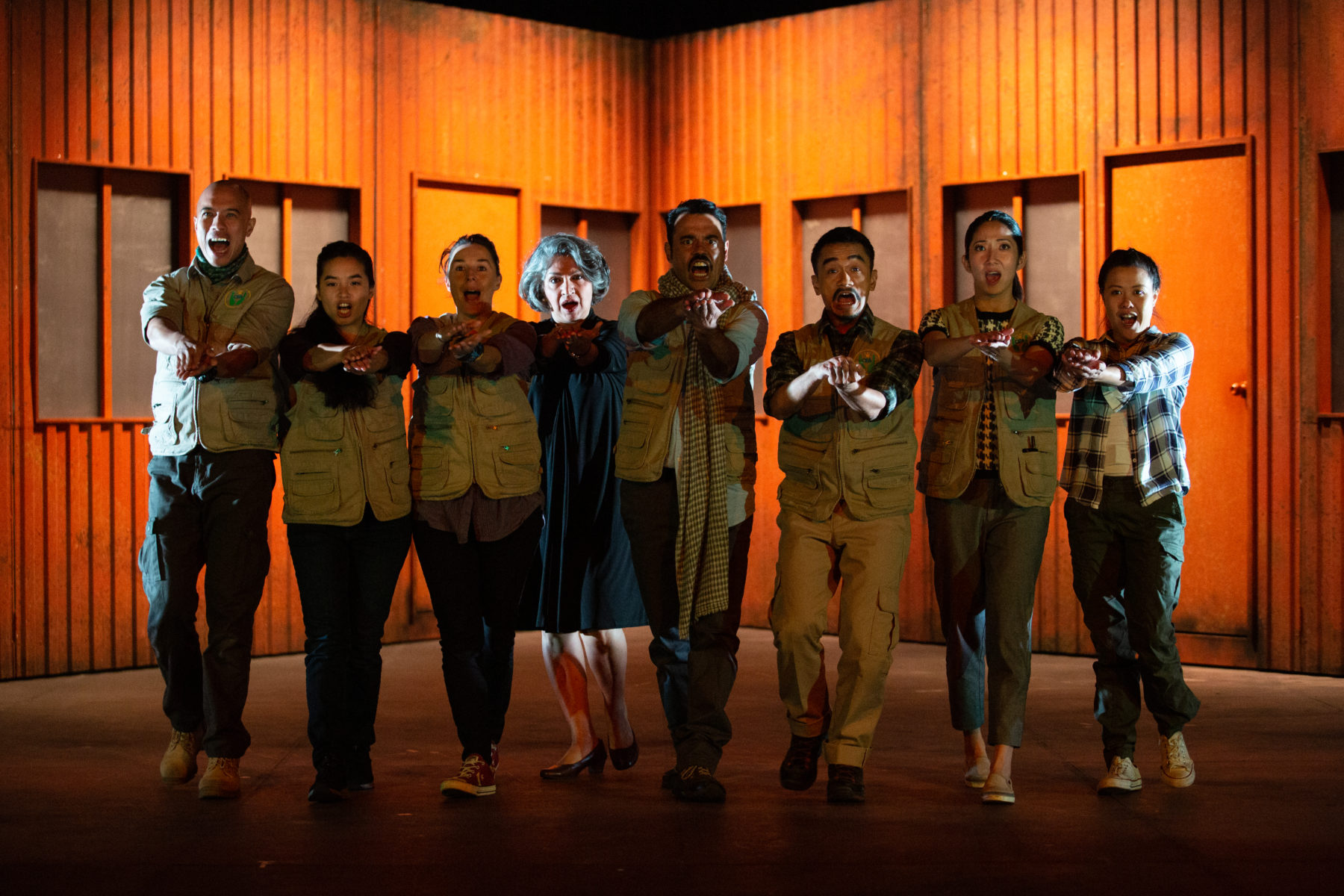 Why do people choose to go into poor, dangerous, war-torn countries to work as humanitarian workers? Do they have boundless courage, hope and kindness? Do they have a death wish? Do they believe they can make a difference? Are they simply naïve? Do they suffer from a messiah complex? Or First World guilt? Did their countries once colonise other countries? Are they cynical about humanity?

How do these women and men, who mostly come from the developed world, deal with privation – if not quite experiencing it directly, then at least witnessing it firsthand? At what point does their idealism get crushed by bureaucracy, the constraints of their organisations, their own limitations?

As a participant of the inaugural Asian Arts Media Roundtable organised by ArtsEquator, I got to watch and share my thoughts with over 20 arts critics and members of the public at Critics Live, a post-show dialogue of Checkpoint Theatre’s Displaced Persons’ Welcome Dinner, a play that sheds light on the fallibility of humanitarian aid workers. It was staged in Victoria Theatre in late May as a commissioned production of the Singapore International Festival of Arts 2019.

A few non-Singaporean critics remarked at the dialogue and later to me that this wasn’t a play they’d expect to come out of this country. Singapore, a secure and affluent country, has been relatively unaffected by the worst disasters to have struck this region. When the 2004 Boxing Day tsunami hit our nearest neighbours Indonesia, Malaysia and Thailand, Singapore was sheltered by the Indonesian archipelago. When the Asian Financial Crisis brought down a few economies in the region, Singapore only dipped into a brief recession. It’s easy to become complacent when you live in Singapore, and forget that parts of the world are on fire.

So for a play like Displaced Persons’ Welcome Dinner to emerge from this island feels like an anomaly to a lot of people, Singaporeans and non-Singaporeans alike. Even though there have been Singapore plays that tackle the subject of war, they mostly draw material from the Japanese Occupation of Singapore in the 1940s – not from the concrete, contemporary realities of war-torn regions.

Of course, those who are familiar with Checkpoint Theatre would know that its two artistic directors are not Singapore-born to start with. Huzir Sulaiman, who wrote the play, is the son of well-known Malaysian lawyers and human rights activists. If there’s anyone in Malaysia or Singapore who was born to write this play, it’s probably Huzir. The play’s director Claire Wong is also Malaysian-born; she studied and practised law in Singapore before turning to theatre full-time. The pair, who are married, established Checkpoint Theatre in Singapore in 2002.

Displaced Persons’ Welcome Dinner is compelling but flawed – as ambitious, high-concept art often is – and the gathering of almost two dozen critics from 10 Asian countries critiquing one play ensures many divergent views. I, for one, was utterly captivated by much of it. For the most part, Huzir has written a razor-sharp naturalistic script which Wong has both honoured and wrung surreal moments from, the combined effect of which I found fascinating.

Displaced Persons’ Welcome Dinner revolves around four female and three male humanitarian workers in a refugee camp. With limited resources to tackle an unlimited tragedy, the women and men work overtime to rescue lives and rebuild communities – even as they struggle to stay hopeful, energised and sane. A shocking incident on the camp’s grounds, however, shatters this precarious balance and unravels the lives of key characters.

Not all the critics agree with me on this, but I found the script exceptionally well-written, peppered with mordant jokes, au courant ironies and a zinger to close almost every scene. It was brisk and economical, rhythmic and elegant. The direction was very sharp too, with unexpected forays into surreal moments of physical expression almost at odds with the naturalistic dialogue, yet emotionally germane to the moment.

At one point, for instance, logistics coordinator Hamid (Yazid Jalil) is trying to convince securities expert Tim Rodriguez (Brendon Fernandez) to countersign a dubious contract, only because it would help them save on costs that could then go into feeding more mouths. All of a sudden, Hamid’s eyes glaze over, his body goes slack, and he slides to the ground like a slippery sheet of paper – only to get up and continue the conversation as if nothing happened. It’s a silly surreal moment expressing his inner frustrations with the absurdity of wartime bureaucracy, given only seconds to perform before he re-assumes his professional demeanour – but it is executed brilliantly.

In fact, there are many such surreal moments. And they heighten the drama in ways the hyper-articulate script cannot. As someone who’s grown partially numb to the 24-hour news cycle, I found my sympathies for the victims of war crimes reactivated by a story centred on humanitarian workers, whose own tragedies hint at the vast and unimaginable scale of violence, brutality and mayhem experienced by the refugees they help. In contrast, Thai theatre critic Pawit Mahasarinand said in the post-show  dialogue that he would have preferred the entire drama to be played straight, rightly noting that not every cast member appeared comfortable performing these surreal physical interludes. Perhaps it’s a question of taste – a straight play, for me, would remove much of the production’s multi-dimensional appeal.

But this “straight versus occasionally surreal” question becomes especially fraught later in the play, where three humanitarian female workers (played by Dawn Cheong, Rayanna Dibs and Cheryl Chitty Tan) break into a short synchronised dance to express a horror so deep for them that words cannot do it justice. I found this moment to be moving and remarkable – but a few critics I spoke to found it disturbing that the play should resort to wordless physical expression at the moment when precise words are needed to describe the brutality. They did not want this moment, which addresses sexual assault, to be aestheticised in this manner.

Isn’t much of art tragedy transfigured? Hasn’t there been a lot of art that sensitively depict war, brutality and sexual violence? It may be so. But perhaps as a man who’s never experienced the reality or threat of sexual harassment or assault, I don’t have the capacity to judge if the scene was sensitively transfigured. (ArtsEquator editor Nabilah Said weighs in on the issue of #MeToo depictions in recent theatre in this piece.)

In terms of production design, Wong Chee Wai’s infinitely creative arrangement of corrugated container walls work well with Lim Woan Wen’s angular lighting. They evoke a certain claustrophobia on stage – the irony here, of course, is that the humanitarian workers are also displaced and trapped in these confines. Meanwhile, the ethereal electronic music by the duo .gif (Chew Wei Shan and Nurudin Sadali) augments many of the play’s surreal interludes.

As much as I loved the first four-fifths of play, though, I was dismayed by its final act. The penultimate scene comprises a lengthy series of naturalistic conversations between characters in which backstories are revealed, enmities are resolved, a mystery is explained and narrative threads are tied up. It’s so clunky and contrived, it’s as if the playwright had to hand these pages at the eleventh hour, and the director had no to time to devise the surreal parts with her actors. The play loses its balance between naturalistic storytelling and interpretive physicality, and becomes expositional and blustery when it had been so elegant and sure of itself before.

Endings are hard, as anyone in the business of storytelling would tell you. There is so much that’s good and great in Displaced Persons’ Welcome Dinner that I personally feel it’d be a missed opportunity not to rethink the ending. But, as it is, I’d still recommend it to anyone who’d ask me if it was worth watching. It struck me that Checkpoint Theatre has always taken the “International” in the “Singapore International Festival of Arts commission” very seriously. Its 2016 SIFA production The Last Bull: A Life In Flamenco led audience on a globe-trotting journey with real-life flamenco star Antonio Vargas. Displaced Persons’ Welcome Dinner is similarly global in its scope and ambition.

When a roomful of critics say the play looks nothing like what you’d expect to come out of Singapore, that’s praise.

Displaced Persons’ Welcome Dinner by Checkpoint Theatre ran from 24 – 26 May 2019 at Victoria Theatre as part of the Singapore International Festival of Arts.

Guest contributor Helmi Yusof is the deputy editor (lifestyle) of Singapore’s leading financial daily The Business Times. He contributed this review as a participant of the inaugural Asian Arts Media Roundtable (24 – 25 May 2019) organised by ArtsEquator.