As a resident of Yishun, I do not usually expect any sort of art exhibition to come to my town. As a town notorious for cat killing and the occasional murder, you wouldn’t expect any cultural experience to rank high on the list of places to go in Yishun, which was why I was pleasantly surprised to hear that SAFRA Yishun was a pit stop for The Arts House’s Textures 2021: The Bottled City installation.

From the outset, the installation, a small orange trailer, seemed quite odd at first – juxtaposed against the steel and glass surroundings of SAFRA Yishun. The image on the rear of the trailer, an array of bottles filled with different types of food in an almost crest-like design, conjured up expectations of a literal moveable feast’s worth of re-imaginings of local literary works. And I was not disappointed. 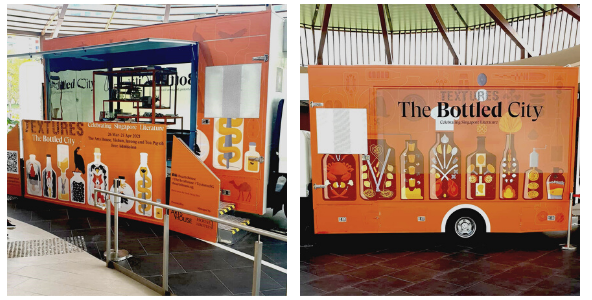 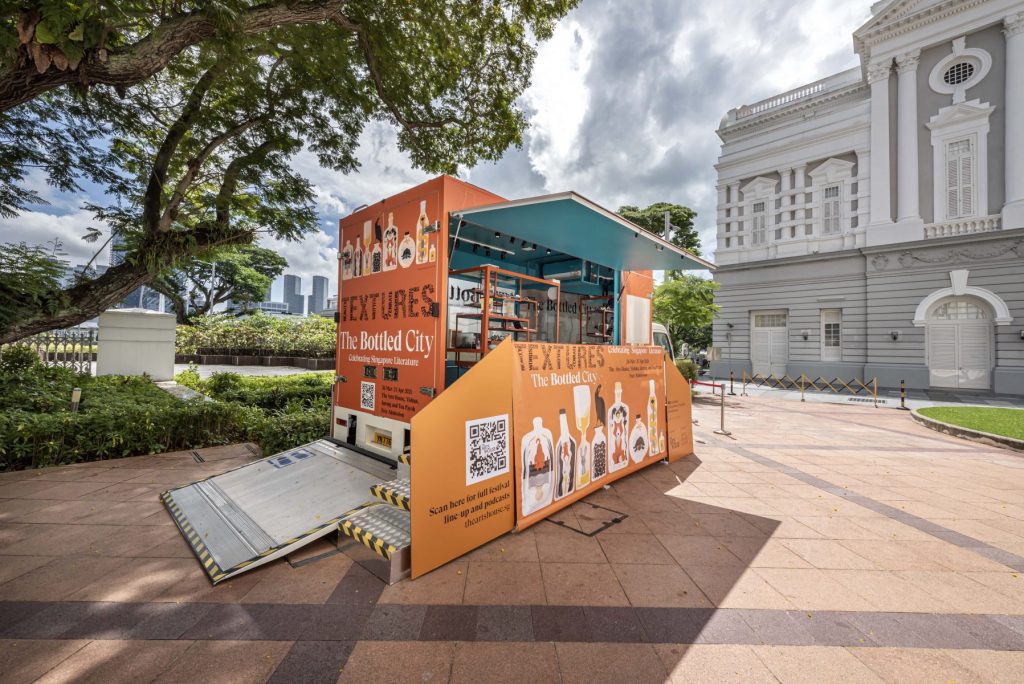 Perhaps the most interesting thing about the installation was the tight space. Practically, it was because the organisers were trying to fit in as many books and art pieces as they could (I’m told they are 60-70 books!), but it also reminded me of going through mountains of books amongst semi-claustrophobic shelves of second-hand bookstores that once dotted both Yishun and Sembawang as a child, which have all but disappeared in the wake of online bookstores. I really like the organic feel of the place – how the books seem strewn all over the place even if you knew they had been curated to look like it, and the way it responded to the theme of The Bottled City, because it captured so much nostalgia in a really small space. 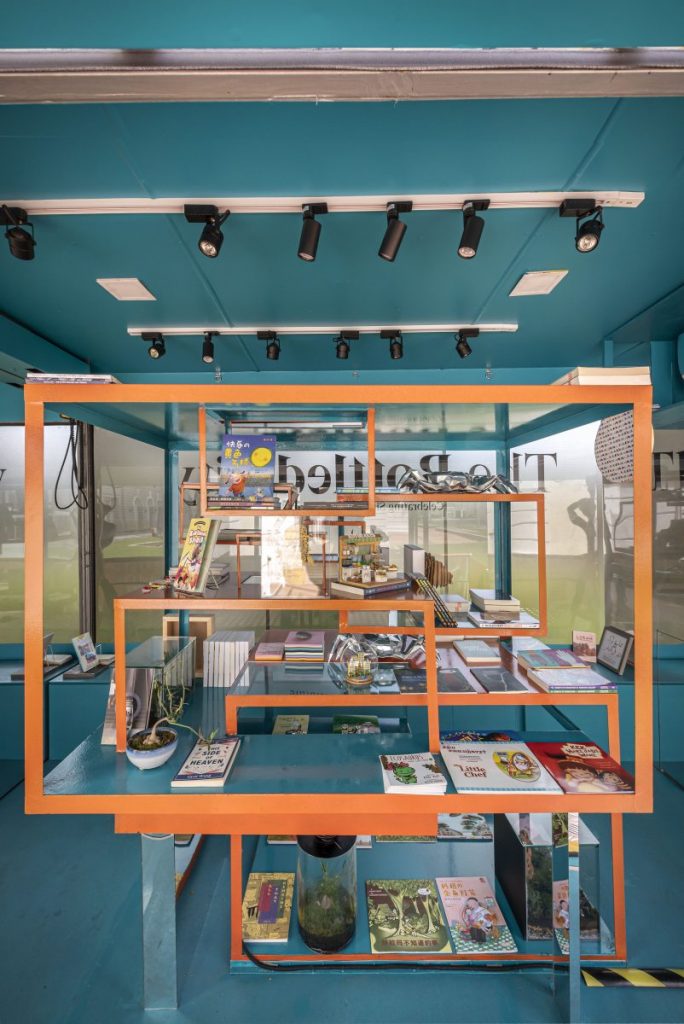 The inside of The Bottled City. Photo courtesy of The Arts House.

One of the most enjoyable parts of the installation was a chance to make my own origami “juvenile crab” as part of an interactive activity by Justin Noah Chua, made in response to the anthology Eating Chilli Crab in the Anthropocene. I was reminded of one of my earliest published poems, which happened to be about Yishun/Sembawang, entitled “The Last Mudcrab of Sembawang Park”. In that poem, I wrote about the changing landscape of the area and the loss of wildlife habitats as seen through the perspective of a mudcrab who was losing its home due to overfishing. 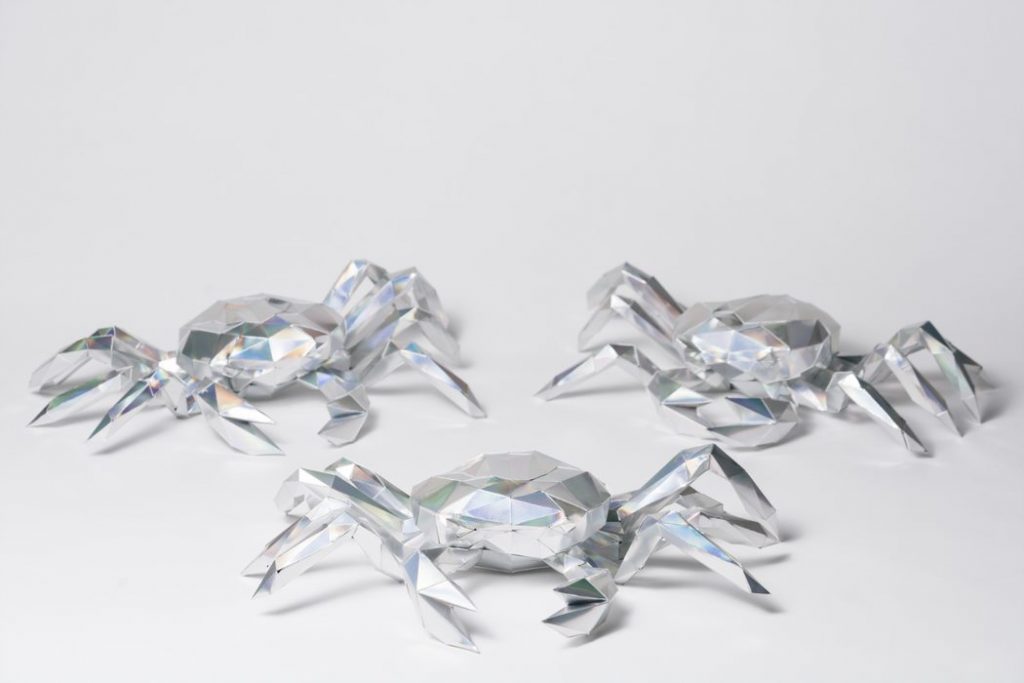 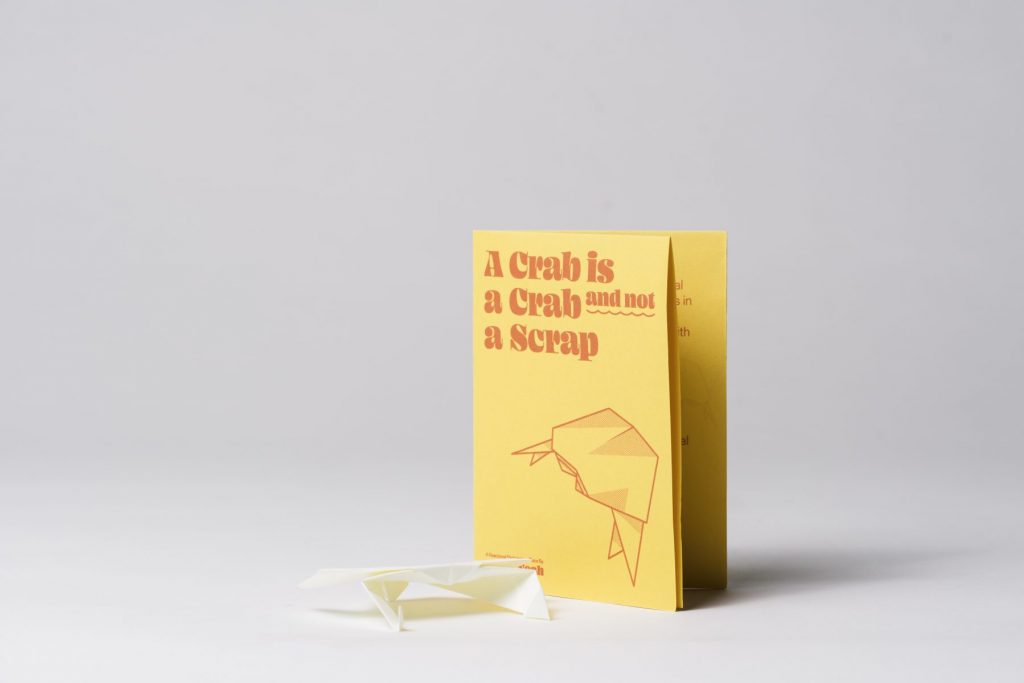 3D-printed crabs by Justin Noah Chua and instructions for how to fold your own juvenile crab. Photo courtesy of The Arts House.

Crafting the origami crab allowed me to recall the changes in my town since my childhood, for example, how much wooded area has been converted to new HDB flats, to the point that I sometimes do not recognise certain parts of Yishun anymore. Throughout the installation, I saw quite a number of origami crabs (proof of other visitors earlier in the day) along with Chua’s gem of a crab, and wondered if this was a commentary on how the imagination can create possibilities for these endangered species to exist in new forms to raise awareness of the dangers of urbanisation. 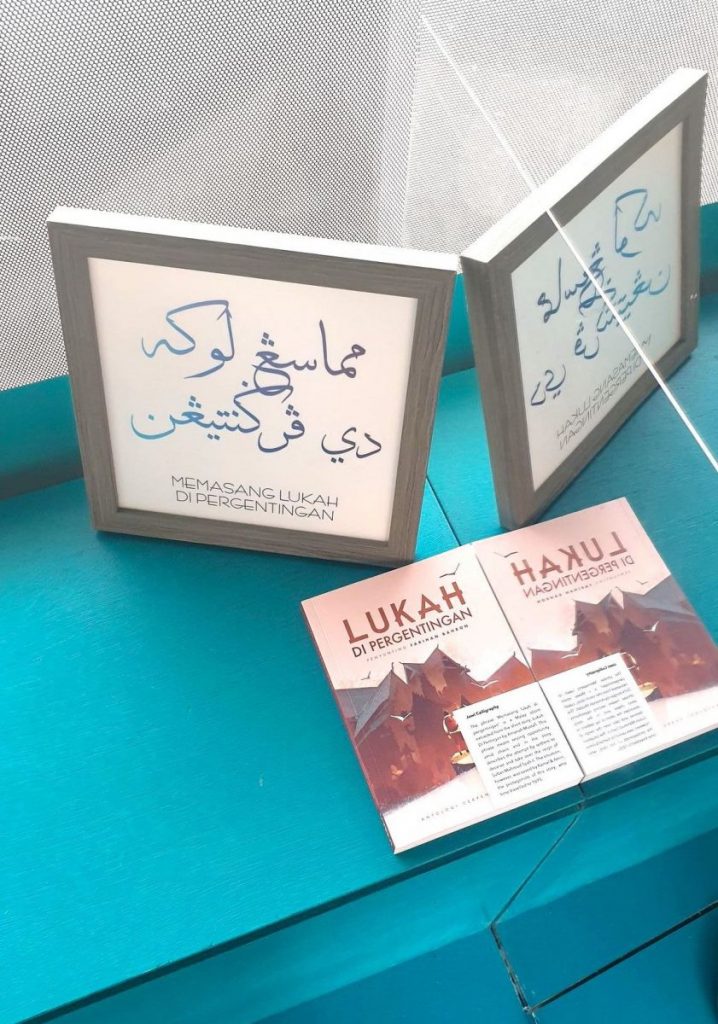 Another interesting exhibit in the installation was Print a Print’s Jawi calligraphy of the Malay idiom “Memasang lukah di pergentingan”, meaning “to seize opportunity amid chaos”, taken from the title of the time travelling tale Lukah Di Pergentingan by Amanah Mustafi. The placement of the exhibit, partially facing the mirror, brought to mind advice I had received over the years by family, friends, neighbours and teachers. As someone who has spent over three decades living in, and studying in schools located in Yishun, I found this moment exceptionally reflective (no pun intended).

When I was a child, Yishun was not a focal point for anything – not a town haunted by the relentless news proving that there was a devil’s ring around Yishun Pond, or a place that needed to defend itself against haters who defamed it on social media. Instead, it has taken these comments in its stride.

In a way, both this neighbourhood and I have found our way by taking advantage of opportunities. I had come from neighbourhood schools, where writing was never really a recommended career. It was a sticking point for me, especially since I was not one to think of art as an esoteric ideal but more grounded in the reality of coming from a small town. I was fortunate to get my break thanks to people who were willing to give me a chance. I was struck by how much my quiet sojourn to The Bottled City resonated with me, at a time when I am considering my next step in my journey as a writer. 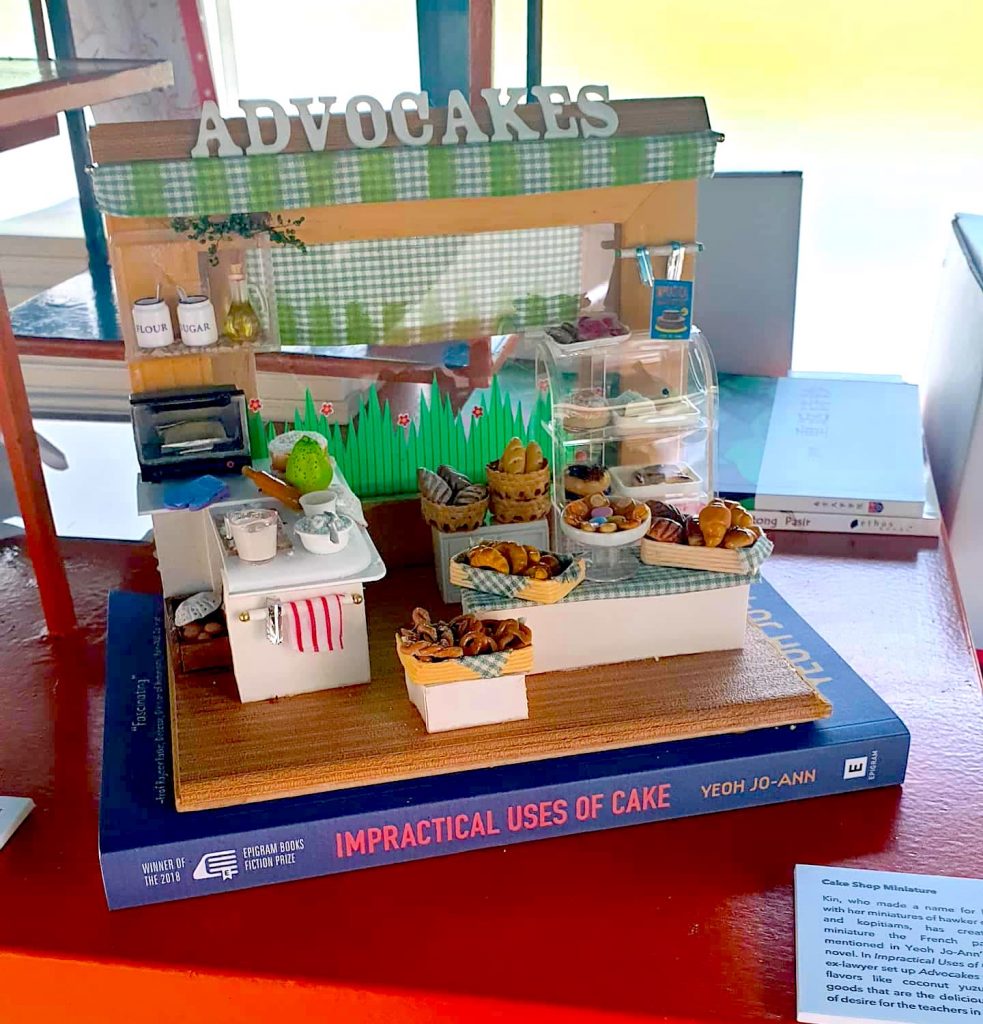 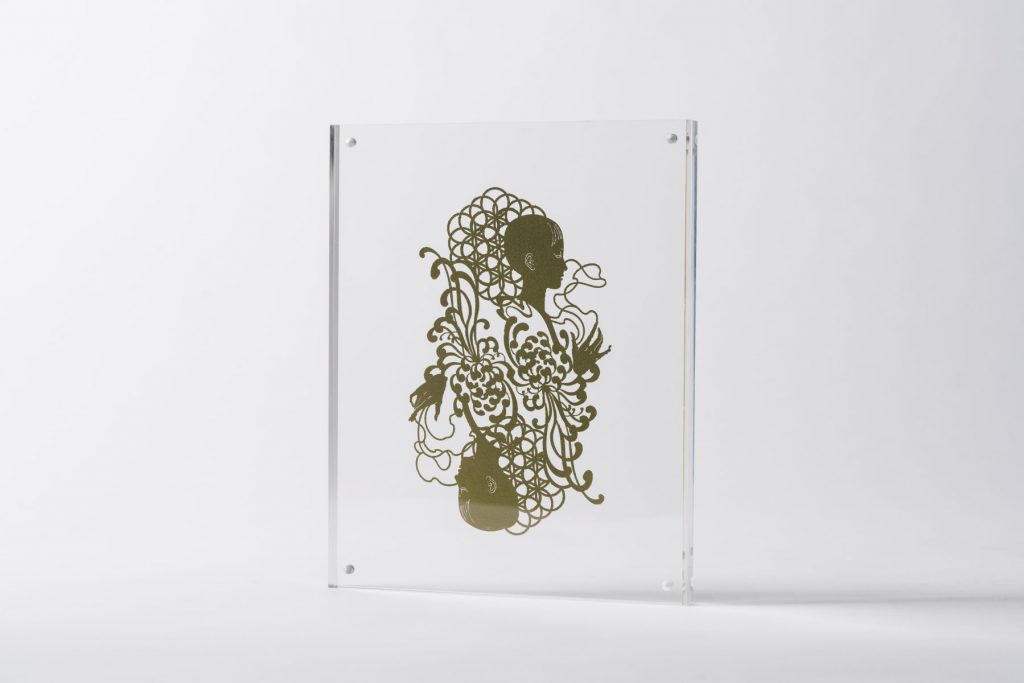 There were other exhibits featured that caught my attention, like a miniature cake shop by Kin’s Miniatures which responded to Yeoh Jo-Ann’s Impractical Uses of Cake, a book that captures the current zeitgeist of professionals increasingly quitting their day jobs to start their own baking and food businesses. Another artwork, Ashley Yeo’s intricate papercut book plates, responded directly to JY Yang’s Tensorate series, which was a crucial milestone in Asian literature in the way they helped to establish the silkpunk genre that is built on East Asian motifs and landscapes. These exhibits were really apt for a town like Yishun, which already has a rich history but is rethinking its identity and counter-constructing negative narratives of its environs.

A year ago, poet Marc Nair and I had organised Uncanny Yishun, a literary tour of Yishun which gained traction amongst residents because they had never seen literary art through the lens of their town. Our participants, many of whom were first-timers to the neighbourhood, commented positively about the space, acknowledging that Yishun had pockets of quiet green spaces amidst its concrete backdrop, surprised by how it felt exceedingly normal.

I visited the exhibition on a quiet weekend afternoon. While I would have liked to have come when there were more people, it was also the perfect setting for a moment of introspection. A young couple that came after me were also intrigued by moments of memory – folding origami and talking about their first experience reading Russell Lee’s True Singapore Ghost Stories. The installation is truly a bottled city, a nostalgia machine, and in a place like Yishun where the landscape has gained mythological proportions for all the wrong reasons, I understand why I continue to write stories to defend the sanctity of this place.

While The Bottled City has left Yishun, you can follow its journey in these locations:

You can also experience a 360° virtual tour here.

Textures 2021: The Bottled City runs till 25 April. You can also check out Textures online, with components such as an interactive murder mystery game, podcasts and more.

Crispin Rodrigues is the co-editor of a poetry anthology and the author of two collections of poetry. His poetry focused on his mixed race heritage and Catholicism, as well as his hometown of Yishun. He works full-time as an educator.