The artistic intention to merge histories and futures is almost always poised as a double-edged sword. One mounts the impossible task of adhering to an imaginary time that is not re-presentable; the other conjures the multitude of never-ending possibilities that are only constrained by the material world. The perfect marriage lies in how the creators extrapolate from their tools of the trade and embrace themselves with the elements, that is, the forces of traditions and the thresholds of creativity. These are what I think the artists in the production of Anticipation of One have set themselves against.

Two musical bands – SA and NADA – come together in collaboration with visual artist Brandon Tay for the first time to create a kaleidoscopic sonic-ocular display. The programme notes express the objectives of ‘interpretance’ and being ‘inventive’, whatever these signify lie in the audiences’ own onsite experience. The artists are placed in a ritual circle with the audiences standing freely in a mosh-pit set up, below a concave screen projection. It is, however, unclear to this reviewer why only the male performers were costumed in ethnic garb – changshan (long robe) and baju melayu with songkok (cap) – while the two ladies remained hidden behind black dresses and mild make-up. The space is fully-packed and darkened; the musicians are cast under a spotlight only when they are heard, thereby foregrounding the synaesthetic continuum.

Untypical of their avant-garde style, especially that of SA, the liminality of improvisation is thwarted by a teleological exposition, introducing each musician one by one. The problem here, whether we are socio-politically accustomed to it or otherwise, is that ethnic musical material becomes aurally represented. Non-tapered strands of Chinese, Indian, Malay, and European harmonies and timbre unfold systematically over an ethnologic backdrop of contorted faces and bodies. Such a categorical showcase is nonetheless balanced by the virtuosities of each interpreter, all of whom partook in a pre-planned directive of motivic acceleration. One highlight for this reviewer is the dexterous prowess of SA member, Natalie Alexandra Tse, on electric guzheng. Opening the show, she punctuated each of her elongated strokes with ephemeral strums, setting a persuasive rhetoric to buttress the momentum of the performance. One wishes that she had used her voice and body in tandem.

The experimental nature of the preliminary half was liquidated by the onset of rhythmic riffs and pop beats, an aesthetic more acquainted with the NADA pair, alongside the passionate energy generated from Cheryl Ong’s drumming. With the microphone now in his hands, Rizman Putra belted out a lagu klasik melayu (Malay song) while rocking to the atmospheric pulsation. Some youngsters in the audiences had by now loosened up, swaying and bopping to the poetic melody. The mesmerising epilogue was delivered by Rizman who chanted “manifestasi imajinasi” (manifestation of imagination) repeatedly as if instructing the audiences to let their imagination run wild based on what had happened in the past hour.

The visual accompaniment furnished by Brandon Tay inevitably took centre stage for being the most animated and vibrant throughout. He skilfully manipulated each of the performers’ visages with an oscillator and coordinated the corporeal distortions with stroboscopic effects. One of the wittier chromatic schemas Tay displayed was reserving all shades of blue till the very height of the showcase. Such a subtractive technique enhances the ocular consciousness of the centripetal sequences. With such a cacophony of sights and sounds, no wonder the audiences are kept in anticipation of one united sound. Devotees of these young talents will have to keep their ears and eyes tuned for the future. 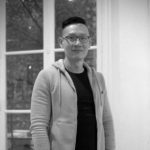 I am a cultural historian and music scholar specialising in gender, media and technology in twentieth-century Indonesia, Malaya and Western Europe. I studied for a BMus (Hons) at the University of Birmingham, and then moved to King’s College London, where I completed an MA (Distinction) in French Critical Theory and subsequently a PhD in Historical Musicology with a dissertation using psychoanalysis to frame Beethoven reception history. I was appointed Research Fellow in Asian Heritages/Digital History at the University of Leiden, the National Library Singapore and the National Museum of Singapore from 2019 to 2022. My research focuses on gender and performing arts mostly in the Malay world, but also of the Indonesian diaspora in Europe and the Caribbean.