Despite the flash of contemporary retail – some garish, some tasteful – Yangon’s old-world charms prevail. Today, walking past the crumbling moss-covered walls that advertise the pleasures of late 20th century globalisation – unlimited wireless connectivity – are slipper-wearing, lungi-wrapped, betel-nut chewing millennials generating unlimited images in a city that only a decade ago still ached to join the global story of democratisation.

Thirty years ago the city gifted the world a spectacle of political upheaval, generating in its wake a genuine global icon in the person of Aung San Suu Kyi. Along with her, a cast of hundreds of thousands whose bodies, like the people of the Filipino Edsa Revolution a few years before, were the canvas on which competing histories would be written.

The 8888 Uprising – named for the date of the outbreak of protests – marks yet another moment in the recurring narrative of popular discontent in the region. Unlike the colour-coded protests of more recent times – Bangkok’s red and yellow shirt clashes, Kuala Lumpur’s yellow Bersih rallies – this exhibition by Htein Win at Beik Thano Art Gallery in Bahan Township, Yangon, reminds us of the work of representation in protests. 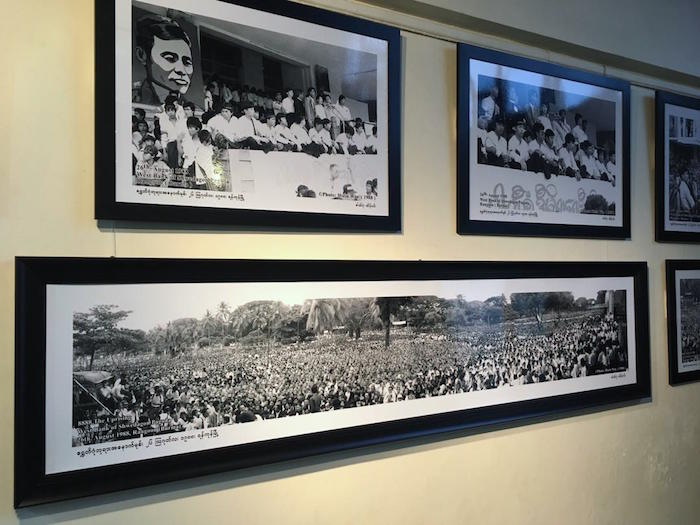 The exhibition of 100 photos, some seen for the first time, is dominated by two modes of protest – the occupation and the procession. Htein Win’s decision to inscribe the location and date of protests as well as the identities of his subjects on the works themselves make the question of where and who explicit to the viewer. 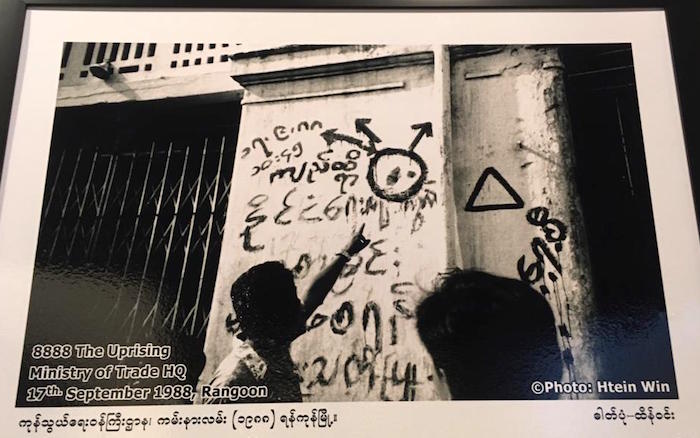 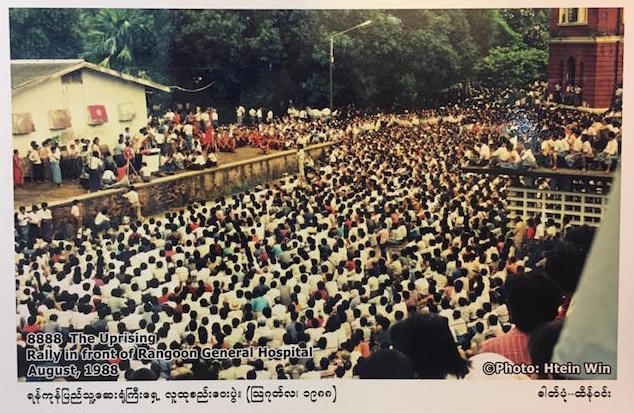 City Hall, the Ministry of Trade, west bank of Shwedagon Pagoda, Rangoon General Hospital and the Rangoon Arts and Sciences University feature prominently as sites of various occupations, where ‘the people’ are seen undifferentiated.

Leaders speaking to the crowds do feature, but less prominently, with just one photo that I could identify of Daw Aung San Suu Kyi.

When the people move, the exhibition names them (as might they have identified themselves in banners) as staff of the New Light of Myanmar newspaper, or high school students, make-up artists [image], writers and artists, lawyers, Christians, nuns, “soldiers of 502 Air Force”. Along with images from Mandalay taken by then student activist Ma Thanda, the exhibition is a sample of people and events of a single emotional register.

As a result, a few quieter, more contemplative images stand out: the barricades on “Pyay Road, Myae Ni Gon” and “the corner of Bogyoke Aung San Street and Sule Pagoda Street” where there is a palpable sense of foreboding, of potential violence. [images] 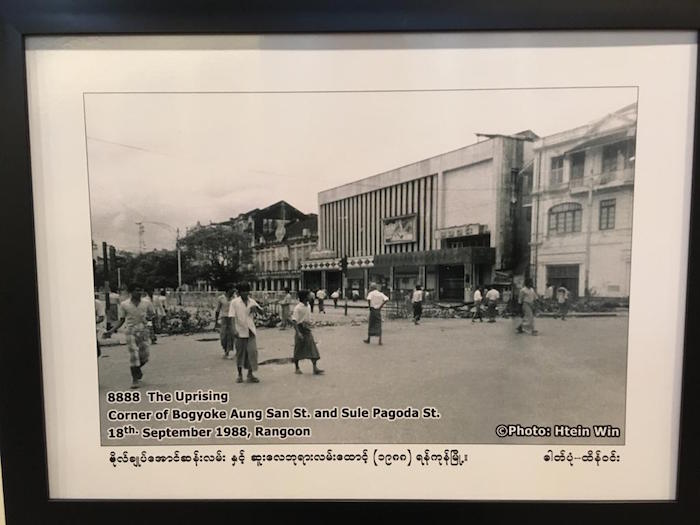 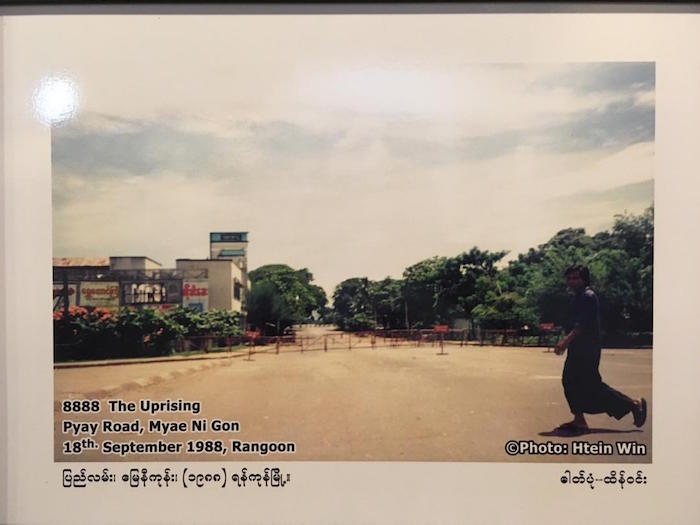 Despite dates available on some of the photos, the exhibition provides no explicit chronology for the story, that’s perhaps all too familiar to local audiences. There is little in fact that ‘leads’ me as a viewer except perhaps what I had read before.

A review of the exhibition in the Myanmar Times reported how taking photographs made Htein Win an object of suspicion for some. And so I looked for ‘hostility’ in the faces of people and stumbled on one particularly interesting instance in which two men look towards the camera.

One had a familiar face – gentle, inquiring – while the other was much more tense. Later when I asked Htein Win if he ever placed himself in his photos, he took me to the same photo. It was him staring back placidly into his own camera lens then in the hands of someone else.

Indeed there are stories to be told about this set of images – Ma Thanda, the woman photographer, Htien Win’s friend who first kept, then destroyed rolls of film – that the exhibit does not take up as its task. Neither does it present a narrative to tease out the competing frames through which we can understand the making of the 8888 uprising and its aspirations.

We are left to draw our own conclusions. 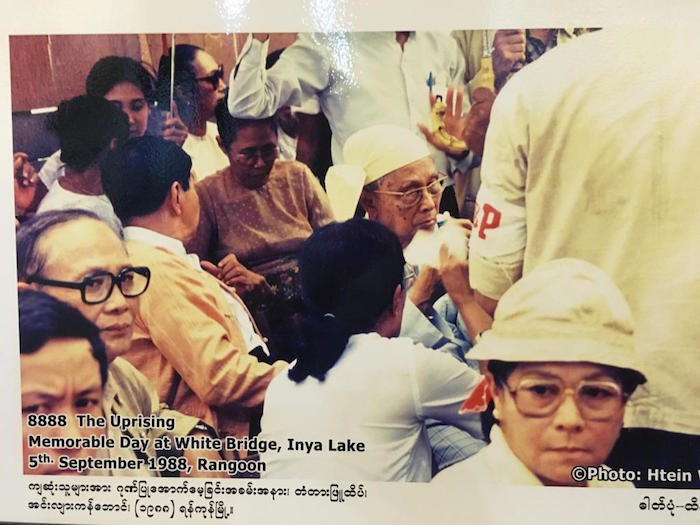 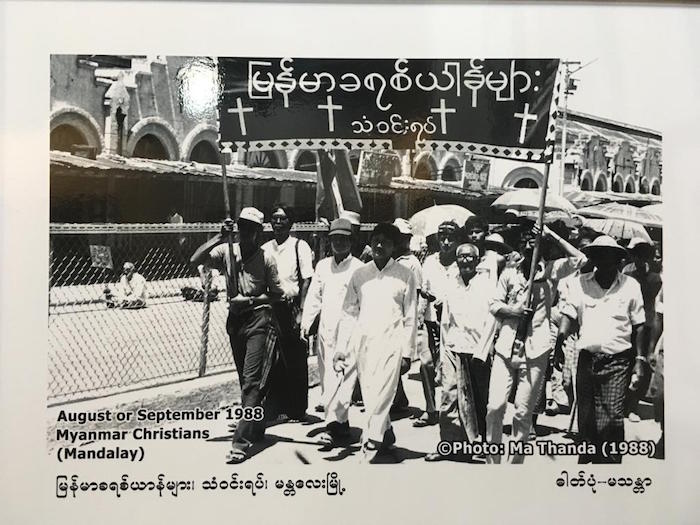 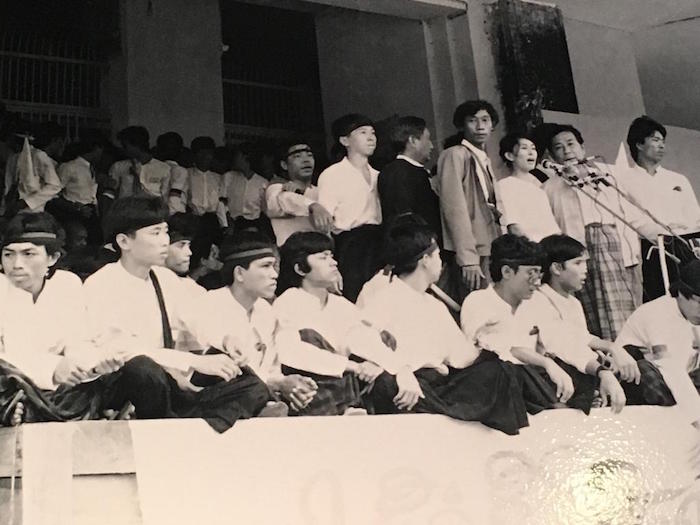 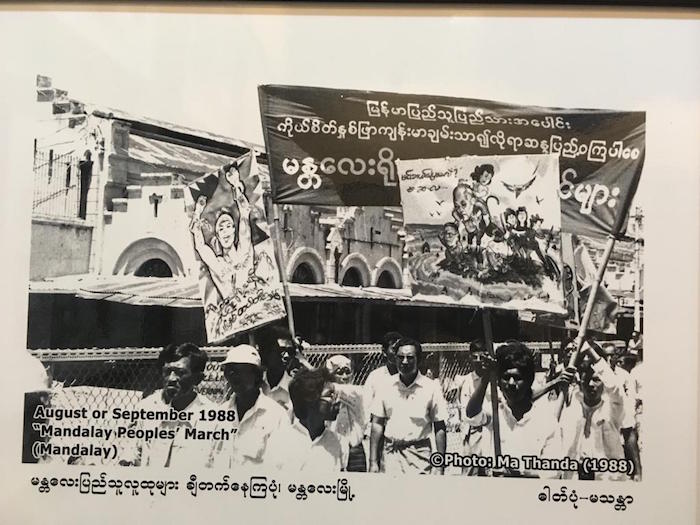 The photography exhibition “8888 The Uprising” was on show from 8 – 12 August at Beik Thano Art Gallery in Bahan Township, Yangon. 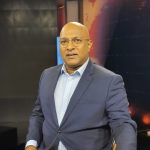