Mutual Unknown is an exhibition resulted from Goethe Institut Indonesia’s CuratorsLAB, a 2-year program dedicated to support a contemporary curatorial practice in Southeast Asia. 14 curators were selected and guided by Agung Hujatnikajennong, independent curator and part of the faculty at Institut Teknologi Bandung, as well as Fabian Schöneich, a curator of Frankurt am Main’s Institute of Contemporary Art, Portikus. Mutual Unknown is a term given by CuratorsLAB to refer to the fact that we still have a lot to learn from each other. The exhibition aims to facilitate certain questions in relation to Southeast Asia. Questions such as whether we have a regional thinking pattern and whether there can be a continuous collaborative creation process despite the region’s cultural differences. Mutual Unknown is exhibited at Galeri Nasional Indonesia from now until 15 June 2017. For more information, click here. 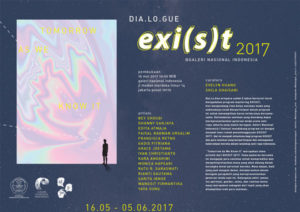 A program of dia.lo.gue Artspace, EXI(S)T started in 2011 by FX Harsono to be an incubator program for recently graduated young adults to develop their artistic potential through a main process of critical discussions between participants, mentors, and curators. EXI(S)T was created to invite these young adults to exit the paths they have taken in order to exist in the visual art map in Indonesia, especially Jakarta. Supported by Galeri Nasional Indonesia, EXI(S)T 2017 invites 15 of the previous EXI(S)T participants to exhibit their new works. Titled “Tomorrow As We Know It”, the exhibition invites participants to predict and interpret the future within the frame of their personal interest. Join the Artist Talk on the 3rd of June to listen to their creation process. EXI(S)T is exhibited until 5 June 2017. For more information, visit dialogue-artspace.com.

Under the Planar series, Goethe Institut initiates a series of site-specific exhibitions. Kudapan Petang, which translates to afternoon snacks is an exhibition by Fajar Abadi, who is interested in the details and layers of the everyday lives. Kudapan Petang is a large, ephemeral installation that explores bulk-unbranded snacks that can easily be found at many markets and shopping centers in Indonesia. Fajar is also exploring how these unbranded snacks are affected by capitalism and slowly mimicking their branded counterparts. Join the artist talk and discussion this Saturday, 3 June 2017 at 4:30 PM. The exhibition runs from now till 10th of June at the Goethe Institut Bandung. For more information, click here.

ArtJog10 is in full swing! Running from 19 May to 19 June, the festival is filled with many exhibitions, fringe events, as well as various performances. One of the performances this week is an art performance by Bambang Besur. A choreographer and dancer who had danced for Solo’s Royal Palace Pura Mangkunegaran and Kasunanan Palance, Bambang Besur is a veteran artist who continues to explore and grow his movement craft that has a basis in traditional Javanese dance. Don’t miss his performance this Thursday at 9:30 PM at Jogja Nasional Museum. To see the other ArtJog10 activities and agenda, visit artjog.co.id. 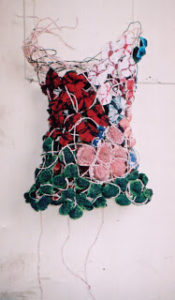 Caroline Rika Winata is a textile artist based in Yogyakarta. Her foray into textile art began with her interest and curiosity of the little surprises found in various motifs and colors in cloths. In 2006, Rika launched a collection for the public tilted WIRU. This exhibition celebrates 10 years of Rika creative process with WIRU. Focusing on tie die and batik, WIRU is a manifestation of experimentations on motives that previously was only done in the Studio. Through WIRU, Rika hopes to express the love, passion, and wonder that she experienced in the creation process. Join the opening on 3rd of June 2017. The exhibition runs from 4 to 11 June at Bentara Budaya Yogyakarta. For more information, click here.