What are the sounds of Singapore? It’s hard to pin down, given that Singapore is the site of a number of different musical influences, many of them rooted in the different ethnic communities that make up the country.  We often hear the term “melting pot” when discussing Singapore – but how does the local music scene echo the essence of its rich mix of culture?

For some time now, a growing group of local musicians have been making music that distinguishes them from the Western pop music that has so influenced and dominated the local music scene. Nadi Singapura, Kulcha, Flame of the Forest, and SA, are all examples of homegrown bands creating contemporary pieces, but with traditional flavour. Out of the need to explore these bands’ personal histories and identities grew “Sounds of Singapore: Conversations with Local Musicians”, an event that was part of an ongoing project funded by the National Institute of Education, and organized by the UNESCO-NIE Centre for Arts Research in Education. The project explores how the musicians’ personal identities make their way into their work, and also examines their views on the notions of culture, tradition, and collaboration.

Each band had been selected for their ability to use Asian traditional instruments to create contemporary music while embodying a cultural hybridity unique to Singapore. Performances by the local bands were held nightly from the 9th to the 12th of January 2017 at the Aliwal Arts Centre. The center is known for championing not just contemporary but also traditional arts groups, which is significant given that it is situated within Kampong Glam, a culturally and historically rich district.

The performances by the four bands each lasted about an hour, during which they delighted the audience with a selection of about four of their best pieces. These performances were then followed by informal question and answer sessions and a screening of a documentary, also titled “Sounds of Singapore”, in which the musicians discussed their music, personal identities, influences and histories. 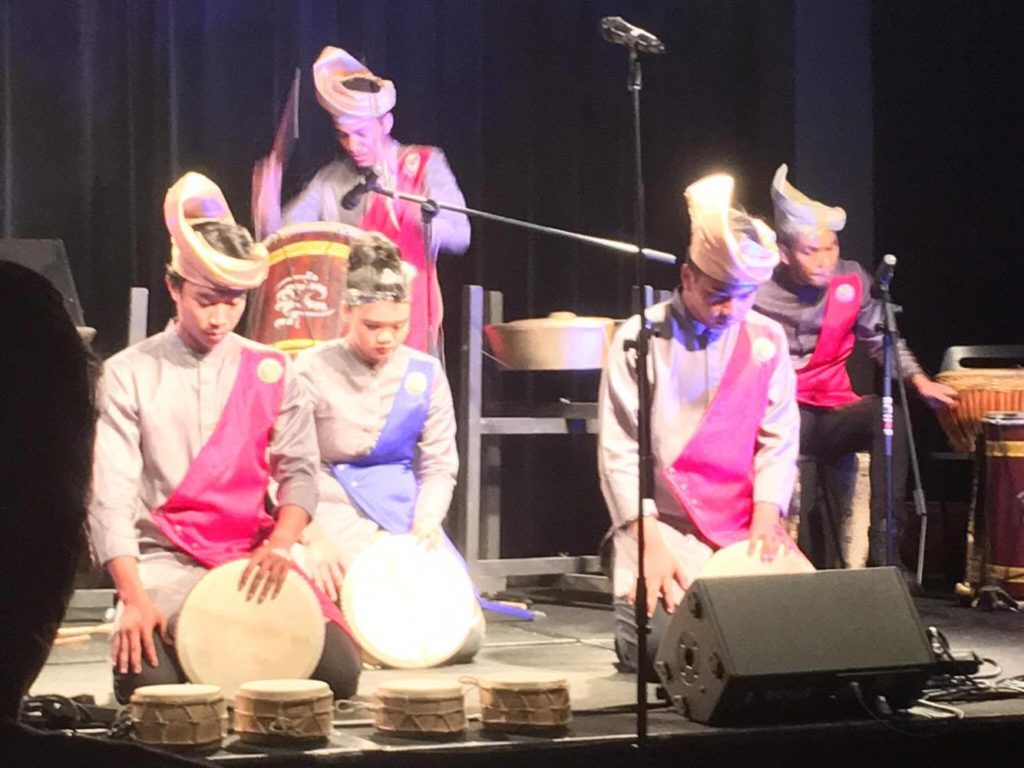 The series of events commenced with an energetic performance by about 10 members of the 44-strong local percussive band, Nadi Singapura. Using various traditional Malay drums such as the rebana, kompang, jidur and gendang, the performers were constantly in motion, weaving an extraordinary sensory experience that immersed the audience in the ‘flow of consciousness’ suggested by the term ‘Nadi’.  The band engaged the audience by encouraging participation in songs such as “Ketipak Dangkong”, right through “The Migration”, which visually and sonically told the story of Arab migrants to South East Asia. The performance ended triumphantly with “Kata Kita Kota”, which roughly translates to “we do what we say”.

In the discussion that followed, co-founder and composer Riduan Zalani talked about the band’s evolution over the past five years. Zalani also offered a peek into the composition process of individual pieces, by revealing that most pieces are composed based on the band members’ individual abilities, as many of them are young and fresh with little to no traditional background. Yet while most pieces are generally not too hard to play for the musicians, they still remain a sonic treat for the audience. 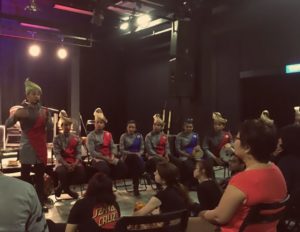 In terms of their own identity, Nadi Singapura is proud to promote the values of the Malay community in contrast to Western ideologies inherent in much of music today. The band talked at length about their instruments and their history; from the goblet-shaped Egyptian table to the rebana, made of goat-skin. With their knowledge and dexterity of the instruments, the band’s appeal extends to anyone who appreciates live performance and music. Rather than holding too fast to traditional sounds, Nadi Singapura uses their music to win the hearts of their audiences. Where strict adherence to tradition is missing, this band leverages instead on the power of their relatable compositions, dynamic performance and palpable positive energy; to this end, they have proved extremely successful. The fact that the members performed in locations as diverse as Russia, Uzbekistan and Korea is testament to the universality of their appeal. 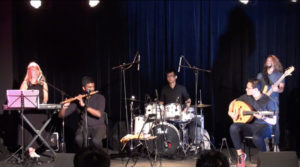 Kulcha creates fusion music out of an eclectic mix of traditional instruments such as the bansuri (Indian flute), the gambus (Middle Eastern lute), the angklung (Indonesian string instrument) and the pipa (Chinese string instrument). The band comprises six members – Gildon Choo, Ismahairie Putra Ishak, Ragha (Raghavendran Rajasekaran), Yazeid Rahman, Stan (Serene Tan) and Soap (Joseph Chian) but only five of them took the stage at this event. Their set featured Yazeid on the bass, Soap on drums and Stan on the keyboard; highlights of their showcase included Ragha’s performance on the bansuri and Ismahairie on the gambus. Keyboardist Stan led the audience in guessing whether the ‘mood’ of different scales played on the bansuri were ‘happy’ or ‘sad’, and also introduced the audience to the gambus, a string instrument with no frets; Stan pointed out that the absence of frets enable the performer to play microtones and slides. The band played original compositions such as “Om Shanti”, engaging audience participation, as well as crowd-pleasing covers such as Sia’s “Chandelier” and versions of well-loved national songs such as the Malay song “Rasa Sayang”, and the Tamil one “Munnaeru Vaalibaa”, which are both commonly associated with National Day celebrations.

When questioned about their identity as a band, the members talked at length about the creative processes behind the composition of their songs. Ragha, the composer of the song “Om Shanti”, revealed that he sought feedback on the piece from many other bands as well as his own friends. As a group, Kulcha prioritizes the sharing of experiences; for example, they travel extensively, and visit each other’s houses during festivals such as Hari Raya and Deepavali. These practices, many of which are characteristically Singaporean, contribute and find their way into their music. Stan revealed that the more the members get to know each other, the stronger the rapport among the members. In discussing how they composed their pieces, Stan revealed that riffs and melodies came first, that different melodies could sound vastly different; and yet “melodies are so important in bringing instruments together.” As with most world music, most of their work is not written.

As to whether they see themselves as a Singaporean band, the members were unanimous in their agreement. Ismahairie pointed out that by having a variety of instruments together playing one sound, listeners wouldn’t categorize it as music characteristic of just one particular culture or race; their music is firmly within the realms of new world music.

Flame of the Forest

The fusion band Flame of the Forest has been around since the 1980s and currently consists of Ksna and Govin Tan on the sitar (Indian string instrument) and tabla (Indian drums) respectively, Christopher Clarke on the guitar, Caleb Koa on the keyboard and Jeffery Tan on the violin. Now into its second generation, the band originally belonged to Kenny Tan, father of Krsna and Govin Tan, who plays the sitar, guitar and pipa.

During the performance, Krsna gave a special shoutout to former members of the band, which also included K. Subramaniam (who also plays the sitar, guitar and pipa). Krsna chatted candidly with audience between pieces, revealing that he had a mischievous nature (in keeping with his namesake, the Hindu deity Krishna). One piece that especially stood out was “Running Water”; the band members skillfully used the traditional Indian instruments such as the sitar and the tabla to create a piece that was refreshingly contemporary.

The documentary that followed the performance shed further light on the lives of the band members; Krnsa and Govin spoke about their journeys to India and their experiences meeting with renowned classical musicians, like the iconic composer Jagjit Singh. Their father Kenny Tan, a Hindu convert, trained under a student of the revered Indian sitar maestro Pandit Ravi Shankar. Memories of the band members as young children with the great maestros were showcased poignantly through photographs. On the whole, Flame of the Forest’s energetic and stirring performance coupled with stories of their origin and distinctive background made the experience a night to remember.

Listen to “Running Water” and other pieces on the band’s YouTube channel.

6-year-old Singapore experimental music trio SA (仨) creates soundscapes that fuse traditional and modern, defying rigid categories of genre and style. SA is made up of Andy C. on the dizi (Chinese Flute) as well as digeridoo and electronics, Natalie Alexandra on the guzheng (Chinese zither), and Cheryl Ong on drums and percussion. Using techniques such as live on-stage looping, SA, through their unique sound, led the audience through a journey that was immersive, visceral, and very real; in fact, one of their pieces that had considerable social significance was inspired by the 2013 riots in Little India. Identified by Bandwagon.sg as one of the bands to produce a “Top 10 album” in Singapore in 2016, SA (meaning ‘three’ in Northern Chinese dialect) do not want to be boxed in by one genre. While they do use traditional Chinese instruments, their work is not something that can be categorized as traditionally ‘Chinese’. Furthermore, over ‘experimental’, they would want to be seen as ‘instrumental’; rather than ‘traditional’, they identify themselves as ‘ethnic’. 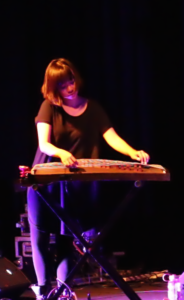 On how they know a song is complete, SA claimed that some of the songs are never complete and there are a lot of improvisations; they invoked  the idea of ‘mo qi’ that they share on stage. ‘Mo qi’, a term within the Chinese culture, refers to the idea of sharing a connection at a deep level.

It is such a notion of connectedness that then defines the sounds of Singapore. At the end of the event, one thing becomes clear: the sounds of Singapore are not trite or homogenous for sure, as exemplified by all the four bands. They are about  unity in the diversity; about the constant reflexivity between the traditional and the modern, past and present, that characterizes this little city-state. In the face of the domination of Western sounds, music and ideologies, each of the bands offer exciting alternative options in music that we look forward to hearing more of in the future.

To watch videos of the performances, click here. For more information on UNESCO-NIE CARE and the project on contemporary identity of Singapore musicians, click here.

Guest Contributor Pavithra Raja is a graduate of the MA (Applied Linguistics) programme from National Institute of Education, with a background in communication, psychology and education. She enjoys travelling, music and photography and more of her writing may be found here. Photographs within the article and in the header are hers.