Everyone is always watching and being watched in Pratthana: A Portrait of Possession, the latest play by Japanese director Toshiki Okada.

The play begins with a Narcissus-like image—a young man gazes into the water as he describes a scene of a man being watched by another. Behind the actor, crew members tip an orange plastic roadblock filled with water from side to side, a microphone held close to amplify the sound of the water sloshing about.

This set-up speaks of the gazing done by artists as part of their art-making and of their willingness and desire for their art, and sometimes themselves, to be gazed upon. The rope barrier that acts like a frame around a painting locks in the art and the artists for the audience’s consumption. It is all at once a tableau of narcissism, voyeurism, and surveillance.

Pratthana began life in 2017 as a Thai-language novel entitled Rang Khong Pratthana (The Body of Desire), written by SEA Write Award winner Uthis Haemamool. From August–September the same year, Haemamool held an art exhibition of his paintings based on the book. Okada then adapted the book for the stage. 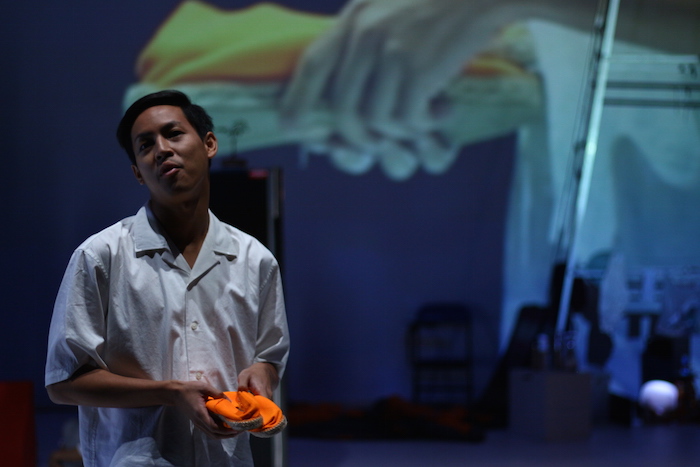 This is Okada’s third production in Thailand, following Five Days in March in 2010 at the now-closed Patravadi Theatre and Super Premium Soft Double Vanilla Rich last year at the Sodsai Pantoomkomol Centre for Dramatic Arts. Pratthana, which will travel to Centre Pompidou in December and Tokyo in 2019, had its world premier at Sodsai on August 22. The production is Okada’s first stage adaptation of a Thai novel and first Thai-language play.

The novel is about an artist, Khaosing, beginning in 1992 when he’s an art student at a technical college. There, he meets a professor who becomes his mentor, and falls in love with a woman whose activism introduces him to the Black May protest. Later, as a student at the country’s top art university, Khaosing rails against the institution and engages in a passionate affair with his classmate, Rakjao. During the years of Thaksin Shinawatra’s premiership, Khaosing engages in two sexual relationships at the same time, with Nam, a man who becomes the subject of his pornographic documentary project, and Fah, a woman desperate to leave her country and family. During the politically tumultuous decade following the coup against Shinawatra’s government, Khaosing puts visual art aside, turns to writing, and tones down his sex life until he meets Waree, a young man who offers to become his life-drawing model.

Okada’s adaptation is faithful to the plot and themes of the novel but draws a much clearer parallel between the political atmosphere of each period in the artist’s life with the character’s psyche and behavior. In the play, the political events feel less divorced from the lives of the characters, whose self-indulgent ways in the novel make them less convincing as victims of an oppressive society than victims of themselves.

Khaosing likes to push against artistic, social, and sexual conventions, but he does it through mostly small and private acts that never expose him to the risk of persecution or ostracism. What Khaosing never thinks of rebeling against is the conformist in himself. 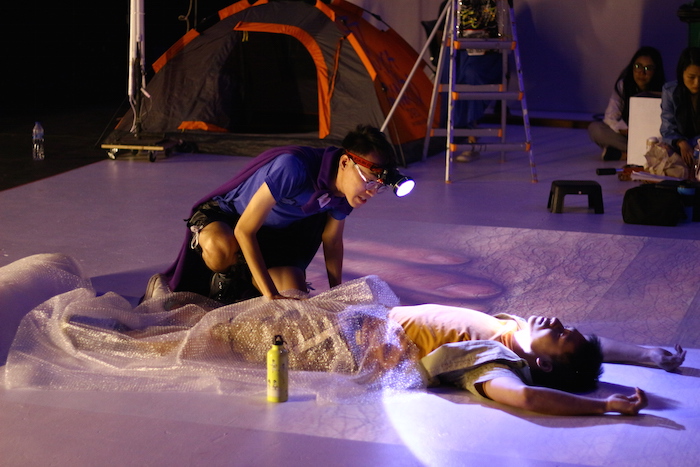 We don’t know the principal character’s name until a group of older students christen him Khaosing during a humiliating and verbally abusive university hazing ritual. The name means to be possessed or haunted. Khaosing speaks out vehemently against Thailand’s longstanding university orientation system among friends. And yet he allows the name that comes from a tradition designed to strip people of their individuality and dignity to brand him for life.

There are few conventional dialogues in the play, and Khaosing mostly refers to himself in second- or third-person. The other characters speak to him in second- and third-person. Khaosing is always a subject and subject to orders.

With the script written more like a narration, the acting style is also more presentational. The actors embody one character briefly before moving on to the next. The cast is made up mostly of actors with physical theatre background. They effortlessly slip in and out of drama, comedy, and choreography. In the second half, where there are more dialogue-driven scenes, Kemmachat Sermsukchareonchai (who’s more known for small comedic roles) and Kwankaew Kongnisai play Nam and Fah with sensitivity, giving the play some of its most vulnerable scenes.

In the show programme, Haemamool writes, “The story is brimming with what is deemed provocative or banned in this society devoid of freedom, whose members are oppressed, unable to speak, and not allowed to speak.”

The explicit nature of these scenes in the book poses a challenge for a live medium like theatre however, as nudity is banned in public places and kissing on the mouth or explicit depictions of sexual acts onstage are uncommon and somewhat taboo. 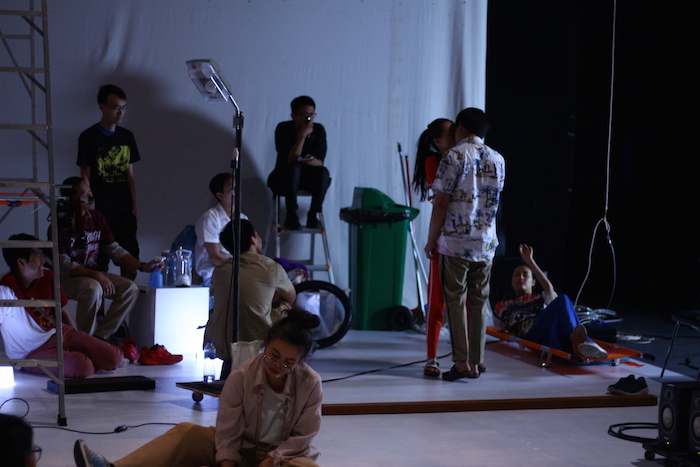 Unlike Haemamool, Okada doesn’t try to scandalise with sex scenes. He treats the novel’s pornography passages with humor, turning it into another comic relief in the play. The actors actually kiss and make out, which is rare in Thailand. But for some reason, there are never kisses between two male or two female actors, even though there are several sex scenes between Khaosing and his male lovers in the book and each role is played by several actors of both genders.

Okada’s most striking treatment of the sexual content from the novel is how he develops some of the sex scenes from scenes of passion and desire into ones of violence. In these scenes, the body goes from being private and personal to being public and political.

In one of the final and most memorable scenes of the play, Khaosing and Waree seduce one another. While they are frozen in an embrace, the rest of the cast moves around them in a tangle of bodies. At first, the tugging and tangling of limbs evoke lust. But little by little, the mass of tumbling bodies turn into bodies of political protestors and eventually victims of political violence as gunshots ring out and they fall to the ground.

Without a doubt, Okada has artfully and beautifully translated the novel onto the stage. And like the novel, the play is smart and stylish and engages the audience with its unconventional form and sexy topics, like freedom and oppression, individuality and conformity, sex and identity. But Okada’s mistake is to treat Khaosing, a character who never rises above his self-indulgence and for whom politics is of peripheral interest, like a reliable narrator, allowing Khaosing to be his guide into a foreign political landscape. Does Khaosing say anything new about these topics? Not really.

Pratthana: A Portrait of Possession by Toshiki Okada ran from 22 – 26 August 2018 at Sodsai Pantoomkomol Centre for Dramatic Arts at Chulalongkorn University. 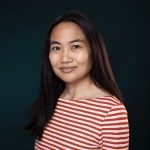 Amitha Amranand is a Bangkok-based theatre critic and writer. Her theatre criticism mainly appears in the Bangkok Post. She is also the co-founder and co-host of Bangkok Offstage, the first bilingual podcast on the performing arts in Bangkok and beyond.