We thought about after a year of not singing together in a live performance, we wanted to have a concert about beginnings and about trying to become like the new normal again as a choir. So of course the idea of morning and dawn and sunrise came to my mind… Matins also consisted of a vigil…. a watching and waiting… for the sun to come and to invite the sun in. The first act of every day is to actually sing praise and to give thanks, and it is what we’re actually doing for this concert.” Jennifer Tham, Artistic Director and Conductor, SYC Ensemble Singers (30th April 2021)

Matins by the SYC Ensemble Singers is the first concert that I’ve been to since the launch of the first circuit breaker in April 2020.

The pandemic had stilled the voices of choirs, with a great silence that stretched for over a year. When the government first announced the physical and social distancing measures in March 2020, the advisories indicated a ban on communal singing. Despite the gradual easing of physical and social distancing measures due to decreasing infection rates,  the restriction on singing in groups persisted. This only changed nearer the end of 2020, where the arts advisories made allowances for up to five singers to be allowed to sing at any given time.

Here, I would like to highlight that choirs are essentially singing communities. Most community choirs see their membership ranging from 30 to 40 members. To have only five singers allowed to sing presents a problematic challenge to choral music making. I briefly outline two issues arising from this arrangement. Firstly, the essence of being in a choir is to sing with your community, and to allow only five people singing would mean that the rest of the choir remains voiceless. Secondly, and one that I personally put emphasis on, is that only the most able of singers are able to hold their own melodic parts independently from their own sections. To be able to sing your own part independently whilst others are singing their own is considered to be the pinnacle of choral musicianship. The requirement of being able to do so immediately excludes many amateur singers from partaking in what essentially is an act of social and musical communion. Five singers do not make a choir, and the decision to decide which five singers get to sing is a heavy burden on the community and the choral conductors. Unfortunately, the restrictions laid out by the physical distancing measures have unintendedly atomised the communities and alienated the singers from one another. The choir communities have lost much during these times, and the physical distancing advisories in Singapore have effectively dismantled the choral arts practices. The restrictions around being able to sing again as a community only lifted on the 5th of April 2021.

It is against this background that SYC Ensemble Singers presented the much anticipated Matins on 1 May 2021. Despite not being able to come together to rehearse due to the physical distancing measures, the SYC Ensemble Singers, led by choir doyen Ms Jennifer Tham, embraced these challenges and carried the torch of hope for a better tomorrow. The bulk of the repertoire is in five divisions within each music piece, with the exception of a notable few. 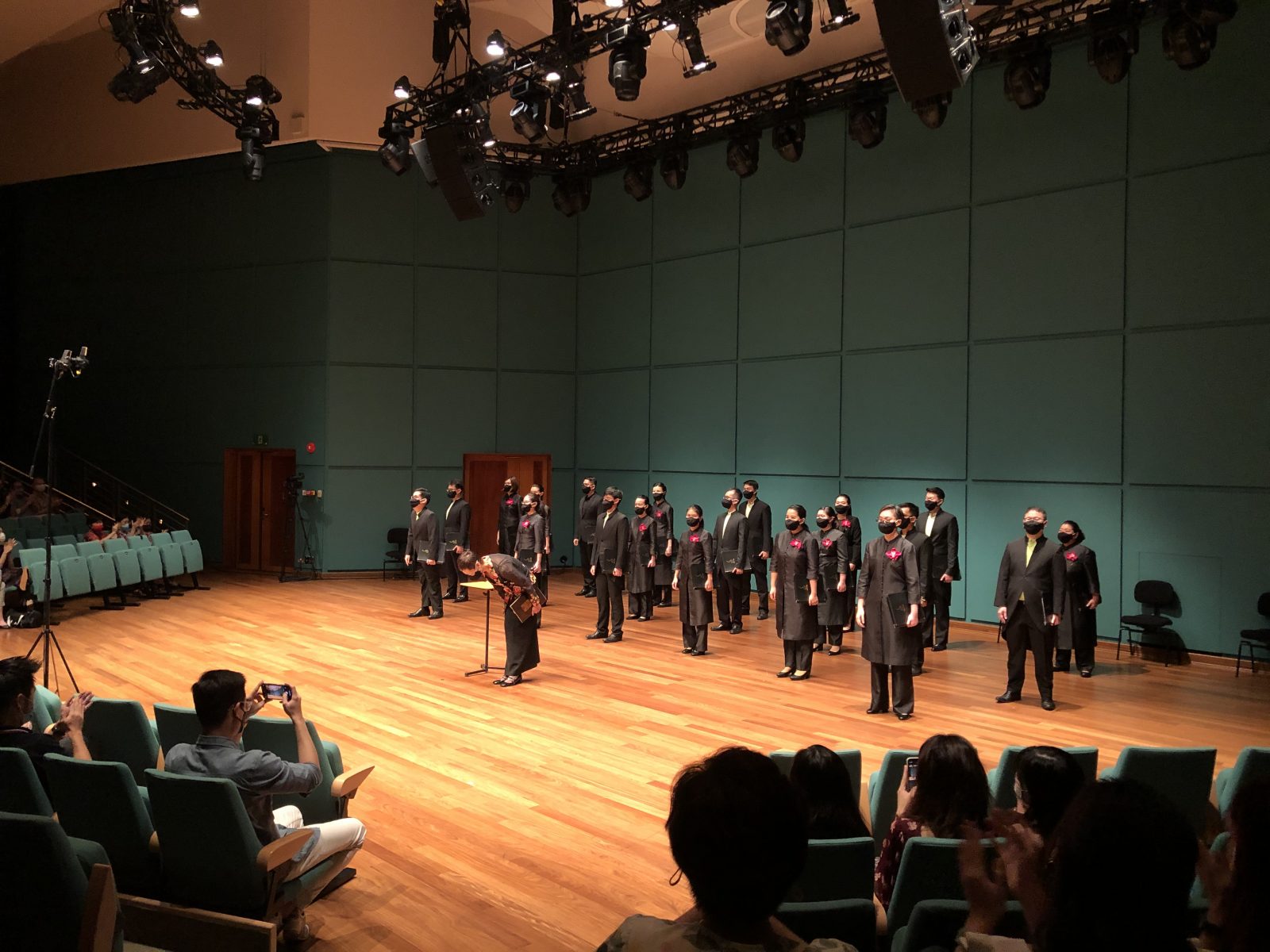 I will admit, unashamedly, that when the entire choir came in after the sopranos sang the opening refrain of Chilcott’s arrangement of the African-American spiritual Didn’t it Rain, my eyes filled with tears. This heartfelt work that speaks of maintaining grace under untenable circumstances was beautifully and poignantly performed by the entire ensemble of 20 singers. Without taking a pause between songs, the choir immediately segued to the performance of Daryl Runswick’s arrangement of the Beatles’s hit song Blackbird. Justin Lutian sings the solo line, and his expressive singing helps to portray the story of the nine brave African-American women living in Little Rock, Arkansas who faced racial prejudice and discrimination in the 1960s.

Following the theme of the dark before dawn, the women of the SYC ensemble singers performed a contemporary interpretation of Hildegard Von Bingen’s O eterne Deus. This melancholic plainchant written by the 11th century mystic was performed with the use of accompanying sustained borduns, psalmodic echoes and aleatoric textures.

A quintet stepped up next, performing Thomas Tallis’ Te lucis ante terminum. Having small groups performing for this performance was a remnant effect of the previous advisory requirements. As ensembles go, this reiteration more than made up for their hesitant and uncertain performance with their sincere earnestness of wanting to perform this to an audience. Furthermore, I surmise that there is a whole new dimension of difficulty when singing one per part as opposed to singing with a larger choir, and this performance was indeed a very honourable attempt.

To me, the highlight of the performance were the following three songs: Arvo Pärt’s Da Pacem Domine, Vytautas Miškinis’ Time is Endless, and Cyrillus Kreek Taaveti Laul Nr. 121. These songs written by Baltic composers evoke a sense of deep sonority that resonates with the ideals of resilience and hope. The second song was commissioned for the choir, keeping to SYC Ensemble Singers’ oeuvre which is known for championing new works. Again, fresh tears flowed freely, and to be able to hear the 20-strong choir singing such lush textures once again brings a fresh ache of grief and relief in equal measure to my heart.

Small ensembles presented the next two songs from the renaissance era. First is Jan Pieterszoon Sweelinck’s Venite, exultemus Domino, followed by Josquin de Prez’s Jubilate Deo, omnis terra. These songs are made challenging by the individual virtuosic lines and the complex voice leading exchanges – to perform this as a one-per-part ensemble is difficult even for seasoned singers. While there were a few slight awkward pauses and breaks in the performance of the former and the slight imbalance of sound in the latter, both performances still delivered an honest and masterful rendering of the works. If nothing else, these slight ‘bumps’ serve as a stark reminder of what once was with the COVID-19 restrictions, and how the ensemble rose to the occasion with this wonderful offering of songs.

The concert ended on the most wonderful of ‘high’ notes- James MacMillan’s O Radiant Dawn was a sonic offering of beautiful extratertian colouration and multimodal harmonies, whilst Saunder Choi’s uplifting and joyous arrangement of George Harrison’s Here Comes The Sun made many an audience member rock their heads with groovy enjoyment.

Never in my life could I have imagined that I would feel so privileged to hear a choir sing live, and I felt doubly blessed that it was the SYC Ensemble Singers who, like the dawn’s first light, shone the pathway out of the aural desert.

Postscript: Alas, as of the 8th of May 2021, Singapore has temporarily reverted to the 2nd phase of the “Circuit Breaker” due to a recent spike of COVID-19 infections in the local community. Choirs had a brief shiny moment in the sun with the SYC Ensemble Singers, and we now retreat to the shadow of silence once again. I hope that we will recover sometime soon, so that choirs all over Singapore can once again lift their voices in song.

Matins, a concert by SYC Ensemble Singers took place on 1 May 2021 at the Esplanade Recital Studio in Singapore.

Shahril Salleh (Dr.) is a social scientist researching the cultural formation of the arts in Singapore, with a focus on how agency is imagined and enacted within the confines of the state. He is passionate about advocating for cultural workers as well as championing community music-making in Singapore. Shahril is the founder and Artistic Director of Vox Camerata.