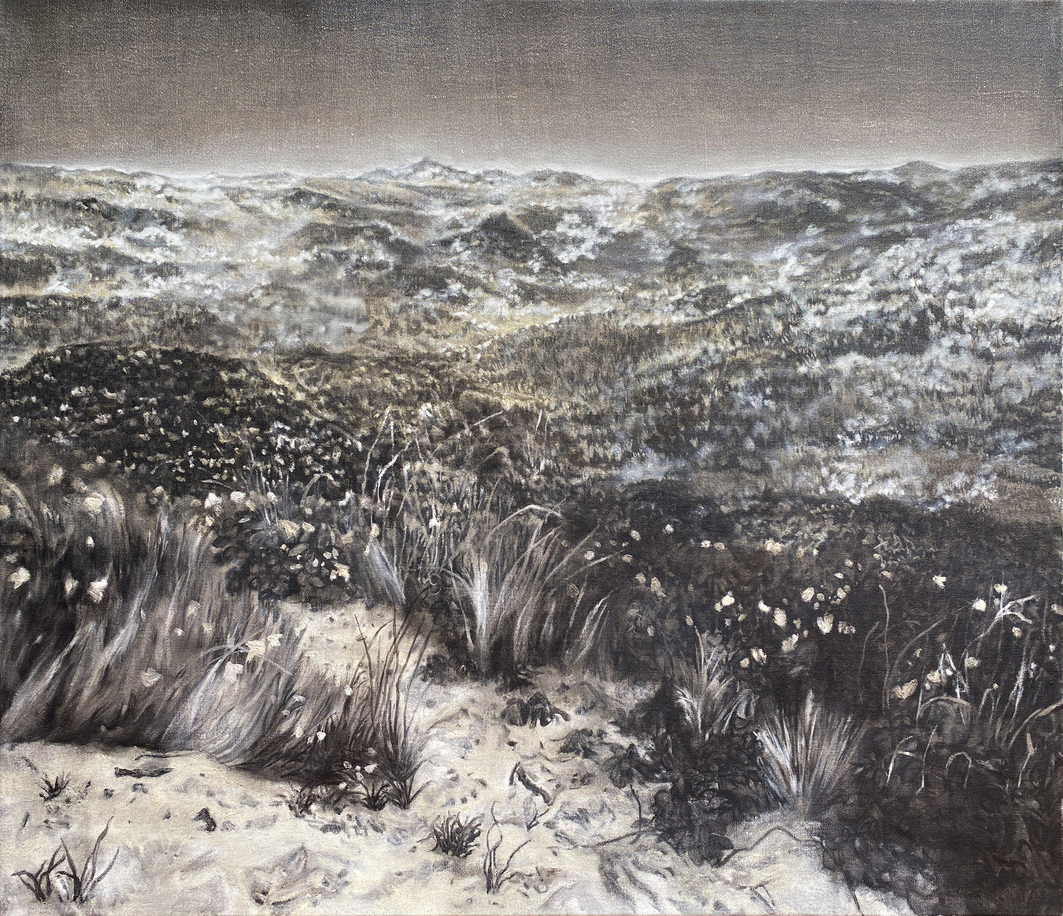 It is the empty space surrounding a mountain’s summit that accentuates its grandeur. Similarly, the sky above a field, the distance the human eye can suppose, emphasizes its vastness. Gazing into these distances suggests a visual-mental journey from the viewer’s position to somewhere else. The distance has no direction and no destination; the only clear variable is the point we are moving away from.

Meng Huang’s paintings have landscapes as their subject as much as the empty spaces above and around them. The formal and thematic immanence of distance in the artist’s works can be retraced in his biography. Despite Meng Huang’s move to Berlin 10 years ago, the artist’s thoughts and concerns remained with China. Already here and not yet arrived – that is one of the starting points of this exhibition, as well as the emotional and mental processes that follow the experience of cultural displacement and an encounter with distance. Evidently, the idiom “Striking Distance” implies a dual distance that can emerge when leaving a culture behind. Close enough to touch and simultaneously conspicuously distant. However, this year marks an immanent change in Meng Huang’s artistic work. For the first time, he is not exclusively painting Chinese landscapes but now also German and Austrian sceneries. Putting these landscape paintings from China, Germany and Austria into a dialogue captures a turning point. This incision perhaps suggests hope and the possibility of overcoming the emotional and cultural distance between oneself and a new environment. Learning to navigate the distance and find solitude, not in proximity to culture but to beliefs, permits new clarity to spread across the void and offers an unparalleled perspective on the world.

Additionally to the landscape paintings, Kang Contemporary shows waterscapes by Meng Huang on the upper level of the gallery. These paintings were initially created after the death of Liu Xiaobo. The waves, which in nature are never static, stop their movement as they are captured on the canvas.  They mark the attempt to preserve a condition that cannot last; rather, it transforms continuously with persistent movement. Holding on, trying to make a moment last, and recognizing the impossibility of petrifying waves, reflects the process that comes with an involuntary distance between a person and their home. While the gallery’s lower level depicts Meng Huang’s journey of overcoming the mental distance between him and his new surroundings, the upper level offers an immersive experience into the emotional depths of cultural displacement. The viewer can be surrounded by the abysmal water and empathize with the moment of being midway between holding on and letting go, mirroring the natural pattern of water itself.

Besides the biographical themes, Meng Huang’s formal vocabulary unites his connection to two countries and cultures in an effortless and unexpected amalgamation of traditions. The philosophy of distance as a subject has greatly influenced Meng Huang’s paintings which were especially common during the Song dynasty. Moreover, the subject of remote locations as a retreat from the turmoils of political and civil society has a long tradition within Chinese art history. Vast landscapes and empty spaces serve as a representation of the self within a culture in which it is forced to withdraw into an internal exile. However, despite these parallels, the format of Meng Huang’s paintings is unlike these ancient Chinese landscapes. The monumental canvases he works with are more reminiscent of Western art history. Rather than moving along a scroll, the viewer is standing at a fixed point, gazing upon the scenery. While the artist does not include people in his paintings, they convey the unmistakable feeling that the human observer and with them, human turmoil is minuscule measured against the vastness of nature. Through his compositions and a muted palette, Meng Huang’s paintings are reminiscent of the philosophy and poetic emotions of German Romanticism. Moreover, the artist expands this vocabulary to a global magnitude. The themes of yearning for peacefulness and the longing for rest from social and political turmoil connect German and Chinese art histories. Adopting formal strategies that are intuitively legible in both nations, the artist employs his combined cultural knowledge into a new artistic tradition that can be understood universally.