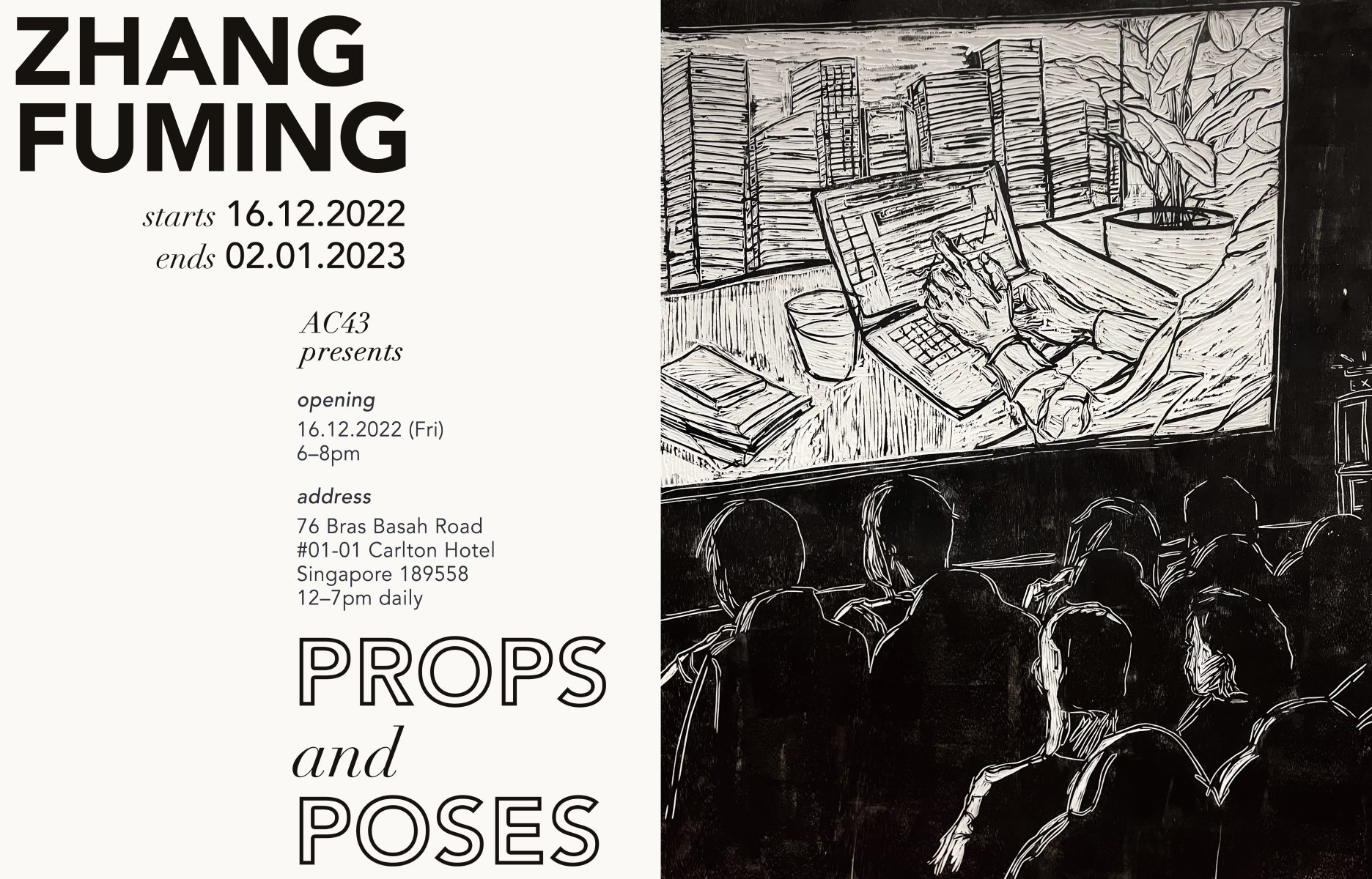 AC43 Gallery is pleased to present Singapore printmaker Zhang Fuming’s latest exhibition, Props and Poses. Through this new series of work, Fuming delves into an observational criticism of the ‘fake it till you make it’ phenomenon and the middle-class obsessional pursuit with materials and ranks within society. Featuring 12 medium- and large-format mixed media woodcuts and 8 small drawings completed in the recent period of 2020-2022, the showcase provides audience an insightful survey of Fuming’s endeavour beyond conventional modes and formats of printmaking.

Zhang Fuming (b. 1989, Singapore) obtained his diploma in Fine Arts (Printmaking) from LASALLE College of the Arts in 2011. He specialises in woodcut and has over the years developed a body of work that harnesses the direct, efficient means of black-white woodcut narratives to express critical social messages. His stark, expressive use of blacks and whites takes after the technique of German printmaker, Kathe Kollwitz, who relies on bold, economical usage of blacks and whites to dramatise scenes of vulnerability, toil and destitution.

Props and Poses lends an observational criticism to the ‘fake it till you make it’ phenomenon and the middle-class obsession with materialistic pursuits and social ranks. Fuming deliberately modelled his woodcut compositions after certain types of images and photographic arrangements that pervade social media trends. The compositions evoke a photo-studio shoot setting where objects are arranged with figures in a particular fashion to create a seemingly spontaneous and objectively positive image. Upon closer inspection, however, these figures and objects are simply incompatible and awkward. The objects may seem unnaturally placed to optimise frontal viewing, neglecting functionality in the process and resulting in a warp of perspective and proportion. The subject matter becomes incredibly awkward and artificially decorative, as opposed to an artist’s process of framing and composing an image. There exists an ironic subtlety in Fuming’s handling of the objects and their significance within the setting of his composition, opening up for audience a contextual ambiguity to ruminate upon.