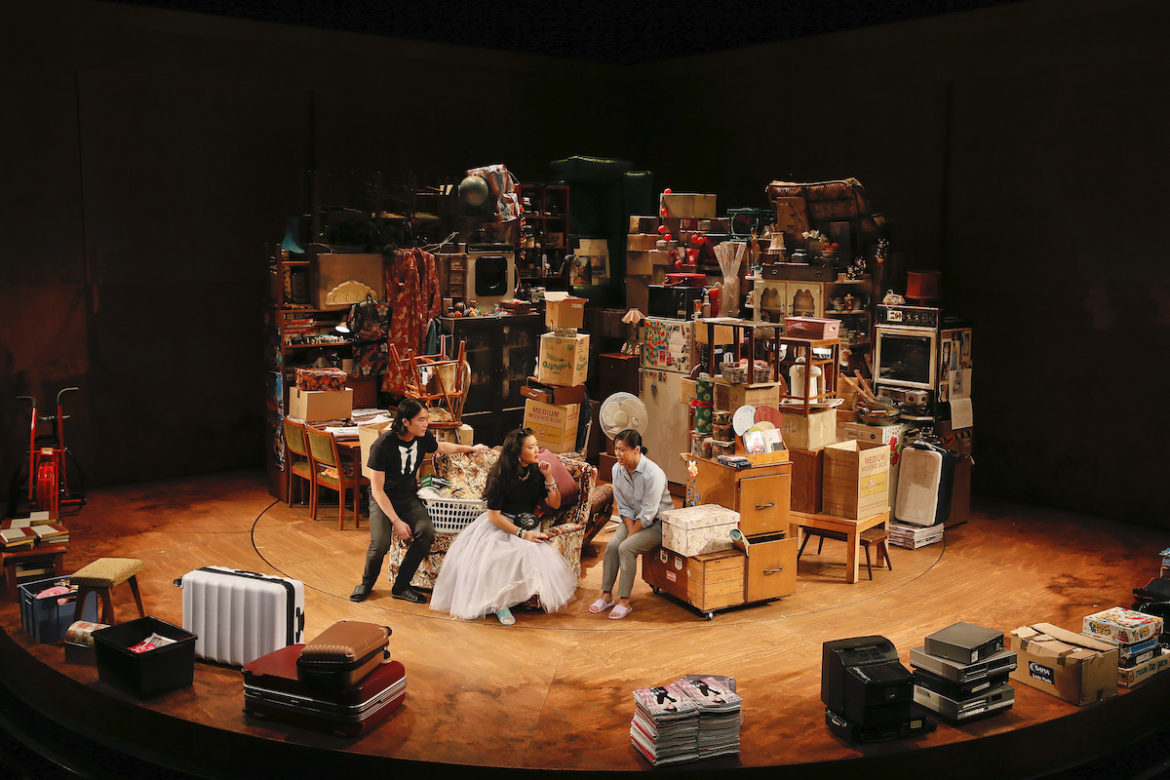 The first thing one sees upon entering the Fairfax Studio in Arts Centre Melbourne for Torch the Place is a huge mountain covered in cloth, and an old piano. The dutiful eldest daughter in a Chinese Australian family plays a note on the ivories, and the large expanse of cloth is pulled away in seconds, revealing a cocoon of old furniture arranged like a forgotten game of Tetris. One swoons, impressed by the slick, yet simple, act. Written by acclaimed television writer Benjamin Law, the play contains the best of both of these worlds: the careful television-style framing, well-drawn characters and pure theatrecraft.

In the middle of this tale and this house is the matriarch Diana, who has a serious hoarding problem and a colonial hang-up to boot. (She is named for Princess Di, and played by The Farewell’s Diana Lin, making it a Diana trifecta.) The occasion of her 60th birthday presents her three children – Teresa (Fiona Choi) , Natalie (Michelle Lim Davidson) and Toby (Charles Wu) – with an excuse to stage an intervention and rid the house of clutter, an impossible task when every object is tied to a precious memory.

Presented by Melbourne Theatre Company as part of Asia TOPA, Torch the Place is an assured debut for Law, who has commandeered his knowledge of comedy writing, with the award-winning comedy series The Family Law under his belt. In particular, the contrast between the children’s trendy and woke ideals and their mom’s relative naiveté often leads to comedy gold.

And yet, Torch The Place manages to touch on serious issues that plague many multi-generational migrant families in developed countries, where a deep disconnect between Western-educated children and their parents causes feelings of guilt, resentment and shame. Diana’s hoarding problem is a manifestation of her desire to cling to the past, but buried even deeper beneath that is an unspeakable trauma her children know naught of.

Under Dean Bryant’s direction, the play moves at a tight pace, and scene transitions are seamless even when it involves moving large set pieces around. Isabel Hudson’s monolithic set is a character of its own in the play, with the revolving stage allowing the audience to marvel at its details from almost every angle.

On balance, there are some traces of TV sitcom writing that seem to betray the playwright. All loose ends are tied up neatly by the end of the play, such as Diana’s surprising acceptance of Toby’s homosexuality and Natalie’s willingness to move back home – neither of which are sufficiently explained. Some moments are telegraphed early on too, with an exchange over a bunch of absorbent sanitary pads making it an obvious Chekhov’s gun.

While the play does flirt with moments of horror, it shies away from exploring truly dark paths. Emotional beats are often let go too soon, giving the audience no time to properly reflect on how characters are really feeling. An obviously seasoned actress, Lin in particular seems to lack an outlet to truly plumb the depth of her character’s despair and mental illness – in fact, one climactic reveal is quickly dispelled with a gag referencing her obsession with the British royal family.

But Torch the Play is kept buoyant with moments of pure beauty and brilliance. A scene referencing the Chinese Disney princess, Mulan, earns its kooky place in the show. Kat Chan’s costume choices serve the play well too – from Diana’s casual auntie fashion to Toby’s statement tees and the kitschy costumes employed in the play’s dreamier sequences. The ensemble – including Max Brown as the slack-jawed in-law – work well as a team, employing an almost athletic sense of timing and grace, never allowing the dramatic hacky sack to fall.

Perhaps best of all was the sound of the Cantonese language being spoken, sans surtitles, which felt like a reclamation of power that is often denied to migrant families living in Western countries. In the post-show discussion I attended, an audience member questioned the use of Cantonese in the play. I am not a Cantonese speaker too, but surely there is reason enough for a character to speak her first language in a play that deals with the diasporic experience? It surely makes one reflect on who Torch the Place is for, whose gaze is usually centred and who is made to feel left out as a result.

As the family clears the clutter and in the process learns to listen to one another better, the stage is stripped almost bare, revealing spots on the walls. One hopes that Law will return to playwriting, and this time, like Diana maybe learn how to shed some creature comforts so that he may gain a new sense of freedom in the theatre.

This review is based on the performance of Torch the Place on 24 February 2020 at Arts Centre Melbourne as part of Asia TOPA. Torch the Place is presented by Melbourne Theatre Company. It runs until 23 March 2020. Click here for more information and tickets.